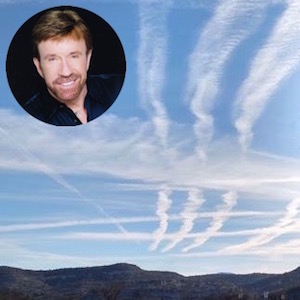 Internationally recognized martial arts champion and celebrity Chuck Norris has yet again shown exceptional courage by continuing to publicly address the critical climate engineering issue in an extremely direct, articulate, and forceful manner. Mr. Norris has previously addressed the power structure's attempt to silence anti-geoengineering researches and informational sites.  Now, in the article below, he continues his examination of global geoengineering, and publicly states his warnings on this extremely dire issue. Let's hope that other well known personalities take a much needed example from Chuck Norris's unyielding moral fortitude. I wish to extend my deepest regard and respect to Mr. Norris for his steadfast and courageous effort to take a critically needed stand for the greater good.
Dane Wigington
geoengineeringwatch.org

Exclusive: Chuck Norris Examines Geoengineering "In Skies Above Us"

Country legend Merle Haggard, who died of a lung infection (double pneumonia) on April 6, sang in his song, “What I hate”: “What I hate is looking up and seeing chemtrails in a clear blue sky today.”

Several months ago, I wrote a column titled, “Why are geo-engineering researchers being stonewalled?” In it, I gave an array of evidence from scientists that geoengineering and, specifically, covert chemtrailing is taking place in the skies above us and unbeknownst to us.

For those who are unfamiliar with the subject and stratospheric lunacy, let me reiterate a few definitions:

Stratospheric sulfate aerosols “create a global dimming effect [that] has made them a possible candidate for use in solar radiation management climate engineering projects to limit the effect and impact of climate change due to rising levels of greenhouse gases. Delivery of precursor sulfide gases such as sulfuric acid, hydrogen sulfide (H2S) or sulfur dioxide (SO2) by artillery, aircraft and balloons has been proposed.”

Chemtrailing is the “public’s term for the classified [covert] and ongoing artificial modification of Earth’s climate systems using reflective nano-materials (aerosols) to reflect sunlight. The aerosols are dispersed via jet aircraft trails that expand into reflective artificial clouds.” 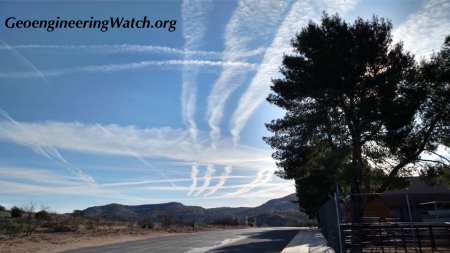 Sarah Zielinski, an award-winning science writer and editor, wrote a piece in December 2015 for the Smithsonian, titled, “Airplane Contrails May Be Creating Accidental Geoengineering.”

In the article, Zielinski explained, “Geoengineering involves the manipulation of an environmental process in such a way, usually deliberate, that it affects the Earth’s climate.”

Zeilinski cites Charles Long from the NOAA’s Earth System Research Laboratory in Boulder, Colorado, who reported at a press conference this past week at the American Geophysical Union Fall Meeting in San Francisco: “This haze is caused by airplanes, and it is gradually whitening blue skies. We might be actually conducting some unintentional geoengineering here.”

Many other scientists would say – as we shall see in a moment – intentional geoengineering.

Long went on to explain, “Its existence demonstrates yet another way that humans might be altering the climate system, and you can see this with your own eyes.”

I know, because my wife, Gena, and I have seen it in the skies over our own Texas ranch.

Kevin Trenberth of the National Center for Atmospheric Research concluded, “It seems quite possible that [Long is] seeing something that’s real.”

Long still calls the haze “a mystery,” but at the moment primarily blames air traffic exhaust and other aerosols as the most likely culprits of those particles.

But is the origin of it all so unintentional and innocent? Or are there deliberate sky criminals who are also chemtrailing above us with other chemical agents?

Long himself is puzzled how certain areas around the country like one in Oklahoma have significant sky whitening yet don’t get as much known air traffic.

When Snopes was investigating the recent accusations that NASA was spraying lithium (the anti-manic psychiatric medication) into the atmosphere and, hence, onto Americans, the liberal fact-finding website even had to confess that, “Buried among the tinfoil were a few actual facts: it was true that a 2003 study examined the feasibility of mass vaccination by air.”

The actual 2003 abstract from the National Center for Biotechnology Information (NCBI), a part of the U.S. federal government’s National Library of Medicine – a branch of the National Institutes of Health, reads:

The feasibility of using aerosol vaccines to achieve mass and rapid immunization, especially in developing countries and disaster areas, is being assessed on the basis of current available information. The aerosol mode of vaccine introduction, which best follows the natural route of many infections, may first lead to development of immunity at the portal of entry, and may also induce a more generalized defense. The recommended optimal way of introducing an aerosol vaccine is nasal breathing, which is more suitable for geriatric and pediatric populations, permits use of greater antigen volumes, and allows easier monitoring of results. Technical requirements for ideal aerosol vaccines and delivery systems, possible adverse effects, and cost-effectiveness are other issues addressed. Several thousand human subjects have been aerosol-vaccinated over a period of many years in Russia with live-attenuated strains against many diseases. Extensive field trials in South America with aerosolized live-attenuated measles vaccine have also been successful, and excellent results have been reported with pilot projects employing inactivated or live-attenuated aerosol influenza A vaccine. We conclude that aerosol immunization seems a promising method of vaccination. Although some basic information is still lacking, this method has already been used successfully in large populations and has therefore passed the phase of initial feasibility evaluation. [Emphasis added by me.]

Over the past 13 years since the study, does anyone think it’s possible that such mass vaccinations or immunizations have occurred by air in trial locations in the U.S.?

How many plane-dropping chemical cocktails have already been sprayed around the world in the name of securing public health?

When the heads of the Center for Disease Control and Prevention publicly sound the alarm that the Zika virus is “scarier than we initially thought” and the mosquito transmission ranges have increased from 12 states to 30 in just weeks, does anyone think there’s discussion of the NCBI 2003 study?

Whatever the intent or justification, and whether or not the purpose is for mass vaccinations or some other devious plot, if you don’t believe there’s some smoke-screening in the sky trails above you, I have a London Bridge to sell you in Lake Havasu City, Arizona.

Supreme among the evidence for the smoke and mirrors in the skies above and in halls of Washington is the work of Dr. J. Marvin Herndon, an American interdisciplinary scientist who earned his bachelor of arts degree in physics in 1970 from the University of California, San Diego, and his Ph.D. in nuclear chemistry in 1974 from Texas A&M University.

Herndon wrote an article that was reviewed and published on Aug. 11, 2015, in the International Journal of Environmental Research and Public Health, titled, “Evidence of Coal-Fly-Ash Toxic Chemical Geoengineering in the Troposphere: Consequences for Public Health.” Again, the abstract from the article says it all:

The widespread, intentional and increasingly frequent chemical emplacement in the troposphere has gone unidentified and unremarked in the scientific literature for years. The author presents evidence that toxic coal combustion fly ash is the most likely aerosolized particulate sprayed by tanker-jets for geoengineering, weather-modification and climate-modification purposes and describes some of the multifold consequences on public health. Two methods are employed: (1) Comparison of 8 elements analyzed in rainwater, leached from aerosolized particulates, with corresponding elements leached into water from coal fly ash in published laboratory experiments, and (2) Comparison of 14 elements analyzed in dust collected outdoors on a high-efficiency particulate air (HEPA) filter with corresponding elements analyzed in un-leached coal fly ash material. The results show: (1) the assemblage of elements in rainwater and in the corresponding experimental leachate are essentially identical. At a 99% confidence interval, they have identical means (T-test) and identical variances (F-test); and (2) the assemblage of elements in the HEPA dust and in the corresponding average un-leached coal fly ash are likewise essentially identical. The consequences on public health are profound, including exposure to a variety of toxic heavy metals, radioactive elements, and neurologically-implicated chemically mobile aluminum released by body moisture in situ after inhalation or through transdermal induction.

Interestingly, on Sept. 2, 2015, just two weeks after it was published, Dr. Herndon’s entire 16-page scientific article was suddenly and completely retracted from the journal based upon only two chemical composition questions and an overarching explanation with no further explanation than this: “The language of the paper is often not sufficiently scientifically objective for a research article.”

It’s time again to wake up, America. I’m not Shakespeare, but something is definitely rotten in the state of Denmark.

Or as another music legend, Prince, who just passed away this past week, sang in his song, “Dreamer”: “While the helicopter circles us, this theory’s getting’ deep, Think they’re spraying chemicals over the city while we sleep? From now on I’m staying’ awake, you can call me a dreamer too, wake up, wake up.”

(For further information on geoengineering and its related subjects, I encourage you to go to GeoEngineeringWatch.org.)