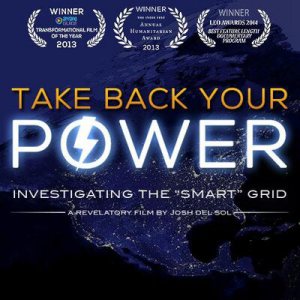 What do we really know about Smart Meters, other than the usual propaganda about how “they are good for us”,  “they will save us money”, “they are safe”? Let’s find out, are Smart Meters really so “smart” (or safe, or cost effective)?

Apparently, not for the consumer, but they are extremely smart for the power companies that are using them to hike up people’s bills, then shut off their power until they agree to pay the increased costs. And, indirectly, for the medical profession and mortuaries that profit from the illness and death that overexposure to EMR/EMF/RF radiation causes, and for the contractors that get hired to rebuild someone’s home after the fire damage caused by so called “Smart Meters” that were improperly installed by under-trained technicians. And, maybe even for lawyers hired to represent victims of forced Smart Meter installation.  But, for us (the consumer), not so much.

I had the opportunity to speak with Josh del Sol about his new documentary, Take Back Your Power: Investigating The “Smart” Grid. Prior to watching his amazing documentary, I didn’t know anything about Smart Meters, they haven’t been installed in my region… (yet). I honestly did not have a clue about the serious risks associated with “Smart Meters” until a friend of mine sent me the link to Josh’s documentary and recommended that I contact him, and I’m so glad she did, thank you, Christine! This is a serious issue that everyone needs to get educated about and involved in.

Josh del Sol is the director and producer of Take Back Your Power: Investigating the “Smart” Grid, his first feature-length film.  Take Back Your Power has in 2014 been named winner of the AwareGuide Transformational Film of the Year, the Indie Fest Annual Humanitarian Award, and Leo Award for Best Feature Documentary (British Columbia).

Born and raised near Vancouver BC, Josh is passionate about the growing movement of social awakening, and has a vision for a more equitable social structure with decentralized energy production and technology which harmonizes with biological life and rights.  Josh finds inspiration in those of courage who speak truth to power, from a place of non-violence and vision, laying the foundation for necessary solutions.  His hobbies include hiking, research, travel and meditation.  He lives in Washington State with his wife and daughter.  Josh can be reached through his contact us page.

Rebel Siren: How do you feel about other issues affecting our global civilization such as GMOs, vaccines, weather/climate modification, fracking, etc.?

Josh del Sol: It’s obvious that there are many examples of the corporate-government establishment negatively affecting humanity.  It’s time that these programs need to be reined in, so that our species can continue.  This is becoming blatant even to many within this establishment.  Most who are serving the various negative agendas are not bad people; they’ve just been roped in, indoctrinated and are getting a paycheck.  But people are waking up.

Rebel Siren: What is the next step in the “Take Back Your Power” movement?

Josh del Sol: The next phase of our movement is to help people easily remove their consent to “smart” meters, and enforce accountability for those that are causing harm by deployment of “smart” meter programs.  To participate, subscribe for free at www.takebackyourpower.net and you’ll receive updates and a notification of solutions when available.  This will be for everyone, whether or not there is a so-named ‘smart’ meter on their home or not.

Rebel Siren: What initially inspired your documentary “Take Back Your Power”?

Josh del Sol: In the summer of 2011, I started hearing reports about all the problems associated with the Californian “smart” meter installation program. I thought,  ‘Why isn´t this issue being talked about?’  As I dug into the facts and begun to interview experts, it became evident that this is an example of greenwashing to the max.  Utilities and governments are using people’s good intentions to save energy and to be ecologically responsible, and creating a twisted agenda that does not save energy but causes the people harm.  So, I called a cameraman friend and we just started interviewing people who are affected by the radiation, which is actually 1,000x to 10,000 times stronger maximum levels than an active cell phone.  We then got into interviewing experts on hacking, and gathering footage from experts on constitutional and privacy issues.

Rebel Siren: Have you had a problem with disinformation attacks by social media shills that are hired to suppress awareness and prevent public outcry about hazardous profit-over-people programs harming humanity such as the Smart Grid?

Josh del Sol: This doesn’t concern me so much.  When you’re bringing truth forward, there will always be those who don’t like it, because they’ve been making (or will make) incredible profits from people not knowing the facts about what they are doing.  It’s normal that in an information battle, propagandists will be hired.  The important thing is that true facts are provided — even if they are inconvenient.  Truth has a quality that over time, people can feel.  We may get sucked in for a while, but as long as there are those who are willing to speak the truth, there is a way back for us all.  Even for the propagandists, who are at a place where they haven’t yet understood that their lies are also harming themselves.

Rebel Siren: What steps should people take to find out about, prevent and/or get rid of Smart Meters in their area?

More information about Josh del sol and his amazing mission to help rid our world of dangerous Smart Meters can be found here: www.takebackyourpower.net/about