Snowstorms And Raging Wildfires In The Same Region On The Same Day, Welcome To Geoengineering 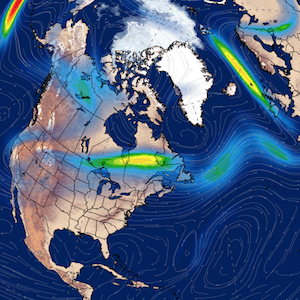 The Climate engineers are increasingly desperate to hide the accelerating planetary meltdown with short term chemically nucleated cool-downs. Engineered cool-downs have been a major component of the climate engineering assault for many decades. The chemical cool-downs create the headlines the power structure needs to continue the population's confusion and division in regard to the true state of the climate. Yellowstone National Park is the latest example of chemically ice nucleated deception. 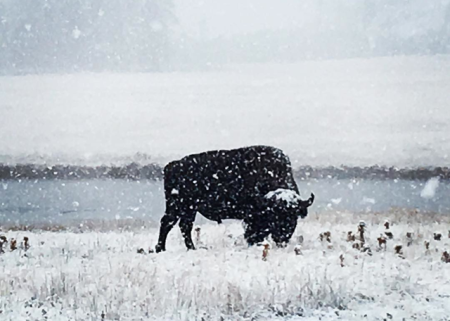 The photo above was taken in Yellowstone National Park on Monday, September 12, 2016. Photo credit: Devon Hannan

The Yellowstone event is not unique, a chemically nucleated "snowstorm" in South Dakota that occurred on October 4th of 2013 killed up to 100,000 cattle. This event occured while it was 85 degrees and raining in Chicago and 89 degrees with rain in Kansas City.Other anamolous cool-down chemically nucleated events in South America may have been responsible for the death of up to 200,000 alpacas.​

On Monday, September 12th, 2016 (the same day that the snowstorm photo above was taken), the south entrance to Yellowstone park was closed due to an ongoing out of control wildfire (as shown in the photo below). 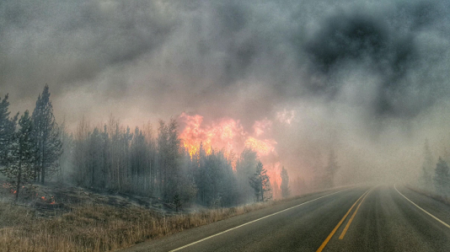 Again, this wildfire was raging on the same day (and at the same time), that other parts of Yellowstone Park were experiencing a summer snowstorm​.

Liquid precipitation can be chemically converted to frozen precipitation under a variety of conditions when there is enough moisture present and a large enough geoengineering operation deployed. The Chinese openly announced the fact that they were chemically nucleating snowstorms until they did a billion dollars worth of damage to Beijing. 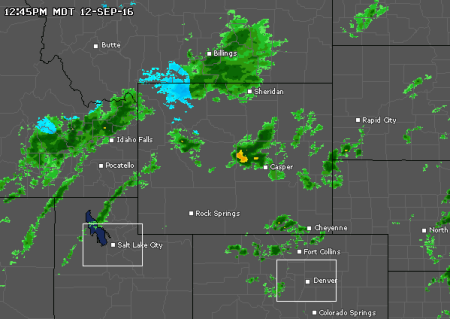 Radar map multi-hour loops can be revealing in regard to chemical ice nucleation process. Migrating bands of precipitation can often be seen "flashing out" to frozen precipitation with no elevation change on the topography below the storm/precipitation.

Do US temperature maps for September 12, 2016, indicate conditions are present that would facilitate such a summer snowstorm? NO. 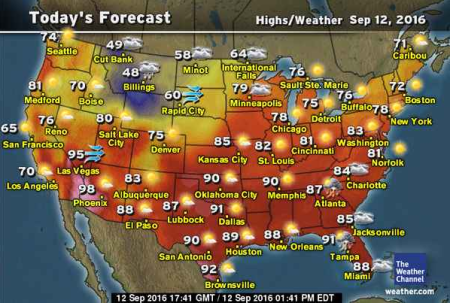 The map above is for Monday, September 12, 2016, the same day as the snowstorm in Yellowstone.

Above normal temperatures are, again, returning to the Yellowstone region and are predicted to peak by Sunday, September 18th, 2016. 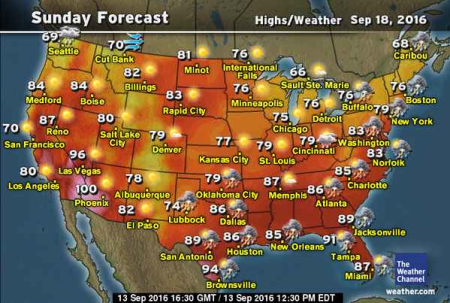 The very rapid rebound of high temperatures is a glaring red flag as to the engineered nature of the Yellowstone "summer snowstorm". Weather "whiplash" is becoming the norm.

As previously mentioned, the engineered cool-downs are a means of confusing and dividing the population as to the true state of the global climate. Though climate engineering can create the temporary toxic cool-downs, they come at the cost of an even worse overall warming. How warm is our planet? This is not about Al Gore and carbon credit scams, it is about reality. July 2016 was the 15th consecutive month of all time record high temperature months. August, 2016, just broke the record again. Records are being shattered in spite of wide spread UNDER REPORTING of official high temperatures.

The animation above clearly shows the trend of rapidly rising temperatures on planet Earth. Geoengineering, and its endless list of negative consequences, is making an already dire global climate scenario worse overall, not better.

Does the long term forecast call for "cooler than normal" temperatures for the US (including Alaska)?  Again, the answer is NO. 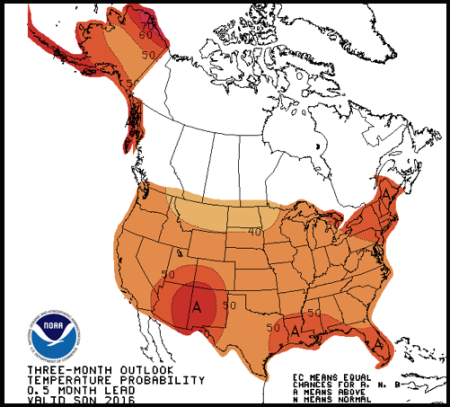 Are global land and temperatures cooling? NO 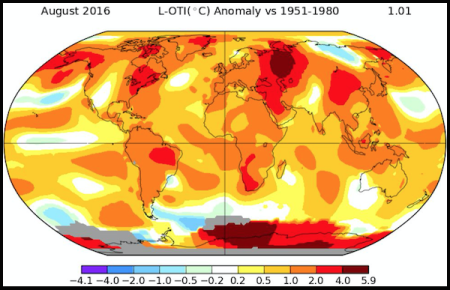 The planet may well be in a runaway greenhouse event already with climate engineering helping to fuel the overall fire.

The biosphere was in a cooling phase until the start of the industrial revolution. The two level periods of temperatures in the historical graph below were due to the climate forcing effect of aerosols loading/saturation of the atmosphere. 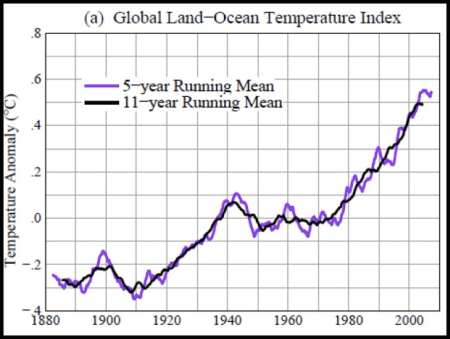 The toxic tug of war between increasing greenhouse gases and atmospheric aerosols (with geoengineering adding to the aerosol loading since the mid 1940s) is wreaking havoc on the climate system.

On a longer timescale, the impact of anthropogenic activity (which includes geoengineering) can clearly be seen.

The long term cooling trend on the planet turned to an abrupt climate shift toward extremely rapid heating.

On an even longer scale, the total disruption of Earth's normal and natural cyclical pattern is shockingly visible 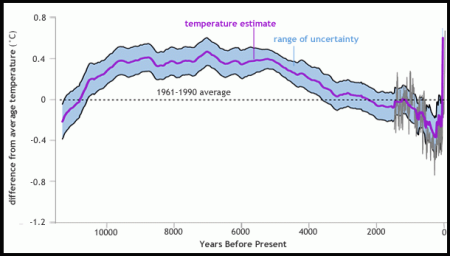 On a time scale of this duration, the heating up of our planet appears as a straight up vertical trajectory at the far right of the graph.

Arctic sea ice is one of the most measurable and visible harbingers of our rapidly changing planet. Headlines of Arctic ice expansion are patently false as are headlines of global glacier expansion. Though Arctic sea ice is imploding, the use of chemical ice nucleation is being heavily utilized in the desperate attempt to keep the headline from full public veiw for as long as possible. The Greenland ice sheet is also rapidly melting. To deny the unfoding planetary meltdown is simply to toe the line for big oil and the geoengineers, public ignorance and denial of the front line reality is what they want. The climate engineers have used climate modification as a weapon of war, nothing less. In their attempt to manipulate the planet's life support systems for their own agendas, the overall warming has been accelerated due to the endless list of climate engineering consequences. The 30 second video below illistrates the melt rate of Arctic sea ice.

From ozone layer destruction, to devastating drought, to fueling wildfires, geoengineering/weather warfare programs are wreaking havoc around the globe. Though the US military has just admitted on the record (again) that the disintagrating climate is a massive national security risk, what they won't admit to is that they (and the global geoengineering programs they are a part of) are a huge factor further forcing the disintagration to begin with. Climate engineering is nothing short of a covert weapon to control populations at the expense of the entire web of life. If we are to salvage what is left of the planet's life support systems, the climate engineering insanity must be exposed and halted. Help us in this most critical battle, make your voice heard.
DW

112 Responses to Snowstorms And Raging Wildfires In The Same Region On The Same Day, Welcome To Geoengineering