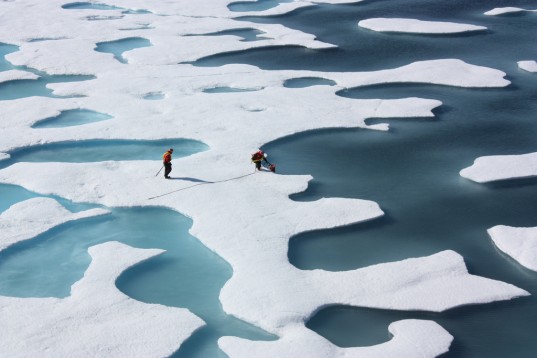 We know that some things are adapting to a warmer climate by migrating north. Some of these species include the Mangrove forest, butterflies, fish, mosquitos and many others. NOAA has added a terrifying new entry to this list, the latitude where hurricanes, typhoons, and cyclones reach their maximum intensity.

The Arctic is a semi-enclosed ocean, almost completely surrounded by land.  Although sea ice moves around the Arctic basin, it tends to stay in the cold Arctic waters. Floes are more prone to converge, or bump into each other, and pile up into thick ridges. These converging floes makes arctic ice thicker. The presence of ridge ice and its longer life cycle leads to ice that stays frozen longer during the summer melt. This process is crucial in keeping vast quantities of the greenhouse gas methane locked under the sea. The arctic has been warming as we all know and this past June, Greenland broke it’s “hottest” record. The melting of the sea ice is resulting in dramatic repercussions, including greater coastal permafrost erosion, which can present problems for the people and economic activity in this region.  Importantly, storms across the Arctic Ocean and higher wind speeds along the edges of Greenland can break up sea ice and speed up its exit from the Arctic Ocean.

Arctic News warns that “the current decline in sea ice extent is much steeper than it used to be for this time of the year, raising the specter of sea ice hitting an absolute record low later this year. Moreover, a total collapse of sea ice may occur if storms continue to develop that push the remaining ice out of the Arctic Ocean into the Atlantic Ocean.”

The threat posed by storms is illustrated by the track projected to be followed by Hurricane Arthur (above NOAA image, July 4), renamed as Post-Tropical Cyclone Arthur (NOAA image below, July 5).

The path followed by Arthur is influenced by the current shape of the jet stream. As the animation below illustrates, the jet stream looks set to prevent Hurricane Arthur from moving to the east and instead make it move into the Labrador Sea to the west of Greenland and – partly due to the high mountains on Greenland – continue to wreak havoc in Baffin Bay further north.

Recent research by NOAA-affiliated scientists suggests that – over the years – the latitude where hurricanes, typhoons, and cyclones reach their maximum intensity on the Northern Hemisphere has shifted closer to the North Pole. Such storms can bring lots of heat and moisture into the Arctic, and they can also increase the height of waves. All this can have devastating impact on the sea ice. The many ways in which storms can increase the dangerous situation in the Arctic is described in the post Feedbacks in the Arctic.

Sea ice is currently very thin, as shown by the Naval Research Laboratory animation below.

The above animation further shows that there now is very little sea ice left in Baffin Bay, making it easier for storms to cause very high waves that could enter the Arctic Ocean and break the sea ice north of Greenland and Canada. Arctic sea ice volume minimum is typically reached around halfway into September. This is still months away, but the prospect of an El Niño event striking this year now is 90%, according to predictions by the European Centre for Medium-range Weather Forecasts.

All this combines into a growing threat that hydrates contained in sediments will destabilize and that huge quantities of methane will be released abruptly from the seafloor of the Arctic Ocean.

There is no time to waste. We must reduce carbon drastically in order to survive.