The Desperation Of The Geoengineers, Documenting An Engineered Cool-Down 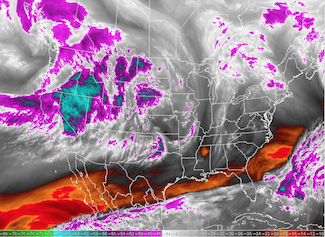 Geoengineering can and does create large scale chemical cool-downs, but at what cost to the overall climate system and life on Earth? If we are to be effective in the battle to expose and halt climate engineering, the effects of global geoengineering must be recognized, understood, and taken into consideration in regard to our conclusions. The following maps and radar/satellite images document a massive engineered cool-down of the US West while the Eastern US continues to hit record highs (the exact antithesis of the previous 3 years). The NOAA map below (produced on December 1st, 2015) reflects the predicted US temperatures for the period from December 7th through the 11th (2015). Each color shade represents an increase of 2-3 degrees above average temperatures. While some are still reciting a narrative of "global cooling", what is the real picture? And what major geoengineering impacts are being completely ignored by most? 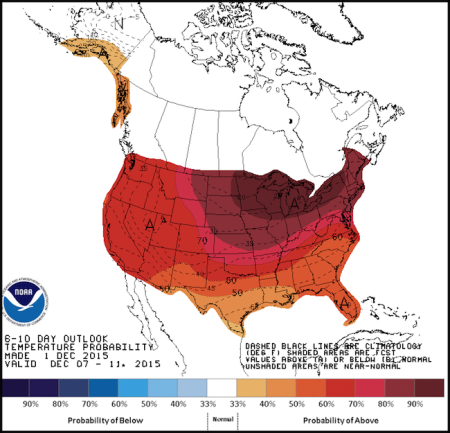 Shortly after the NOAA forecast map above was issued (reflecting an extremely warm US from coast to coast), an engineered cool-down of the Western US was put into motion.

The next map (December 8, 2015) shows profound changes from the original NOAA map above. With extreme amounts of moisture being pushed into the West, the engineered cool-down is underway. 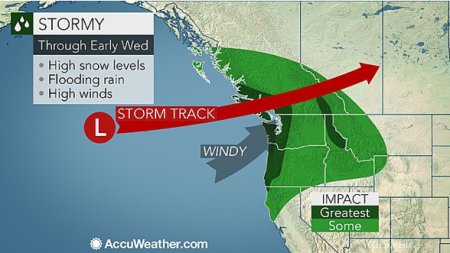 Though flooding is occurring in parts of the Pacific Northwest, and will continue to, the overall precipitation in most areas is still far less than what would have been the case without the massive atmospheric aerosol saturation from heavy jet aircraft spraying.

When there are too many cloud condensation nuclei (CCN), precipitation is diminished and the moisture is migrated further east. Heavy particle saturation in precipitation can be noted by observing droplet size. Very rapid uniform raindrops (which can be observed in puddles and on windshields) are indicative of the condensation nuclei being dictated by the sprayed particles in the rain. Lab tests have confirmed that this type of precipitation does in fact contain the highest concentration of the heavy metals (such as aluminum and barium) contained in geoengioneering patents.

Jet stream manipulation with ionosphere heater installations like HAARP allow the geoengineers to "firehouse" moisture into a given region, in this case the Pacific Northwest. 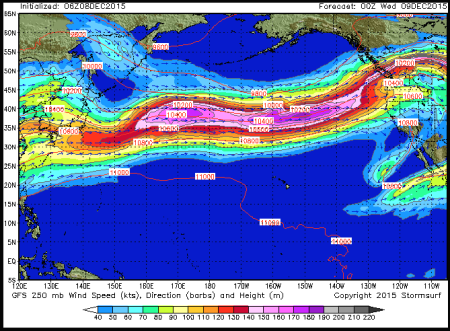 The stream of moisture aimed at the US Northwest stretches most of the way across the Pacific.

What is the goal of solar radiation management (SRM)? To block out as much of the sun as possible. The atmospheric river of moisture streaming off of the record warm Pacific ocean is heavily aerosolized (as described above) which keeps much of the moisture from falling and broadcasts it out into massive regions of rainless (and toxic) cloud cover expanding out over the Western US. 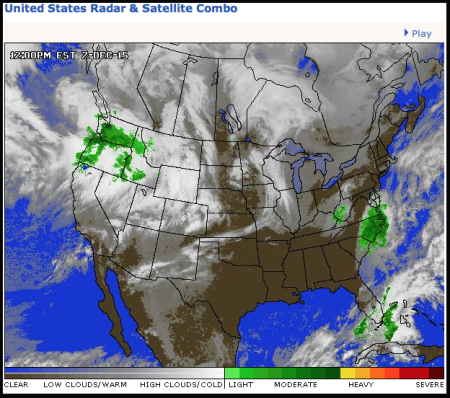 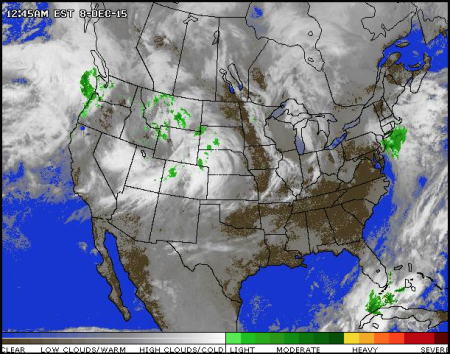 So much of our skies are now covered with various degrees of aerosolized cloud canopy that "blue skies" are largely non existent.

As the heavily sprayed unorganized drifting masses of moisture pour into the West (shown in the satellite image below), the radio frequency signature cloud alignment ripples begin to show up. The radio frequencies help to scatter and disperse the sprayed particulates (and this diminish precipitation). 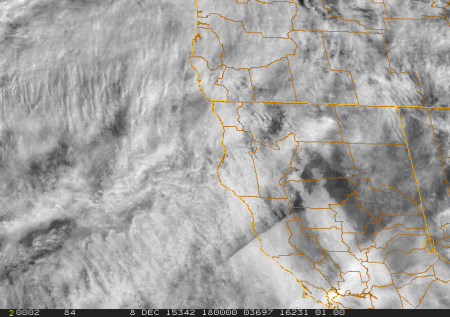 "Global Dimming" is increasing in magnitude all over the globe as the ongoing aerosol assault continues.

In the "Climate Reanilizer" departure from average map below, the projected results of the engineered Western cool-down are showing up. As the aerosolized moisture streams in from the West, chemical nucleation drops the cloud temperatures. This creates a cold dense layer of air that descends to the ground and lowers the temperatures, the desired outcome for the geoengineers. 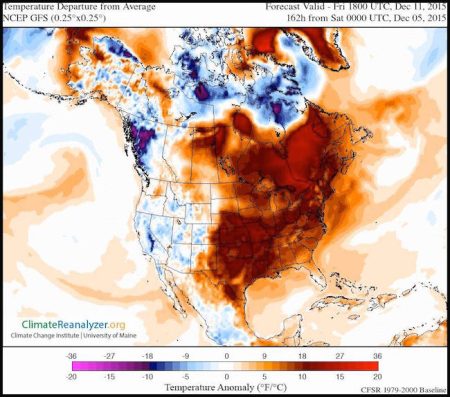 The extreme heat anomalies reflected in the reanilizer map above should be alarming to all. Such extremes are meteorologically unprecedented historically speaking. Not only are the climate engineers tearing the planet's life support systems apart, they are contaminating the entire surface of the Earth.

The updated (after the engineered cool-down) NOAA map below reflects the desired outcome for the geoengineers (compare this to the original NOAA map at the top of the page). If there had been too many record shattering temperatures across the entire US, geoengineering becomes a much tougher sell to other nations. There are undoubtedly countless "behind closed doors" meetings being carried out at the Paris Climate Conference at this exact window of time. The current Western cool-down is the exact antithesis of the last three years in the lower 48 states in which the Eastern US have been the recipient of constant engineered cool-downs. 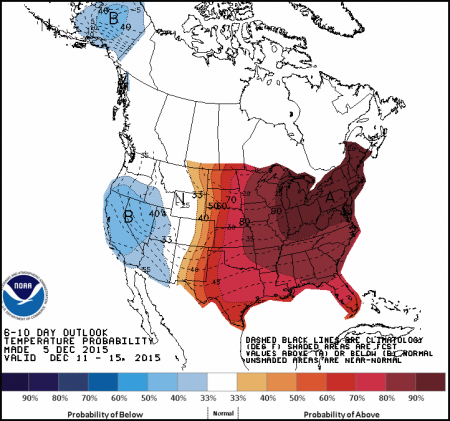 Radical temperature extreme imbalances like those shown in the NOAA map above are historically unprecedented.

So what is the true global average temperature picture for the last three years? The GISS departure from normal high temperature map below is revealing.

The heavily geoengineered eastern half of the North American continent is one of the few zones in the world that have not been hovering in record high temperature territory since the beginning of 2013 (though 2012 was the warmest year ever recorded in the US). The last 5 years were the hottest ever recorded globally.

It is imperative for us all to look past short term (highly toxic) engineered cool-downs in order to see the larger ongoing picture. Every day that global climate engineering is allowed to continue, it worsens the overall warming of the planet. Though many cite dubious characters like former Weather Channel founder John Coleman, and "Lord Monckton", as proof that there "is no global warming", such individuals are hardly a credible source of data.  An honest examination of front line research data is essential for credible conclusions. 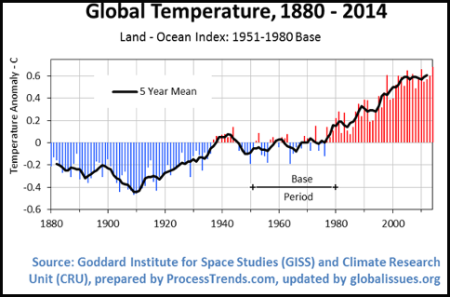 The warming of the planet is so rapid that it is more correctly categorized as a "climate shift" (abrupt climate change). If we are to effectively fight against climate engineering, the engineered cool-downs must be recognized for what they are, not natural.

Global climate engineering must be exposed and halted, there is no other way forward. The more researched and credible activists in this fight are, the more effective we will be in the battle. With ever increasing amounts of disinformation being put out by countless sources, now more than ever, preconceptions and bias must be abandoned in exchange for verifiable facts. We must diligently examine the sources of information behind all headlines. A constant examination of front line data is how a correct compass heading is achieved. It is not about believing anyone, but rather what can be seen with ones own eyes. The award winning documentary "Chasing Ice" is a good start. This is a riveting film with no politics, just inarguable frontline footage. There are many agendas behind the ongoing geoengineering insanity, attempting to hide the damage already done to the climate by engineering cool-downs like the one documented above (while making the situation even worse overall in the process) is one of the primary goals. There is no benevolence in the climate engineering programs, none. It is about power and control, period. We must all work together in the desperate effort to wake the masses. DW

114 Responses to The Desperation Of The Geoengineers, Documenting An Engineered Cool-Down