The Desperation of the Human Race 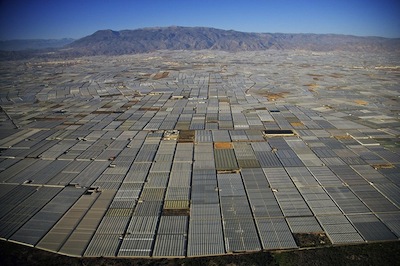 We are all living in a real life science fiction movie. Our skies are sprayed with toxic metals and chemicals for the stated purpose of “controlling the weather”, there are nuclear plant meltdowns, massive fish and animal die offs, etc. The implosion of Earth’s life support systems is confronting us on all sides. Ever more elaborate and colossal efforts are being undertaken as man’s struggle to survive increases in scope, scale, and intensity. The effort to survive itself causes yet more damage to the planet. The reality we have all known is rapidly unraveling, this fact will become clearer by the day to any that are even slightly awake. “The Greenhouses of Almeria” is a glaring example of man’s desperate attempt to cope with an increasingly harsh and inhospitable environment of his own creation. The science fiction movie is now. This is the future for us all as man struggles to feed increasing populations on a dying planet. Climate engineering is the epitome of human insanity. The attempt to mediate the damage done to the planet by a further escalation of the same activities that helped create the damage in the first place is a textbook example of insanity.
Dane Wigington
geoengineeringwatch.org

The Greenhouses of Almeria

Since the 1980s, the small coastal plain, some 30 kilometers southwest of the city of Almeria, has developed the largest concentration of greenhouses in the world, covering 26,000 hectares. Several tons of greenhouse vegetables and fruits such as tomatoes, peppers, cucumbers and zucchinis are produced here annually. More than half of the Europe’s demand for fresh fruits and vegetables are grown under the plastic shades, fuelling the province of Almeria’s economy by $1.5 billion in annual revenue.

But 35 years ago, this region in the southeast of Spain was dry and arid, and desert-like, receiving an average of 200 mm of rainfall a year. In fact, Spaghetti western films were once shot here, because the land was so dry and barren. But with imported soil and fully hydroponic systems that drip-feed chemical fertilizers into grow-bags, over the last 35 years, the area has been intensively used for agriculture. 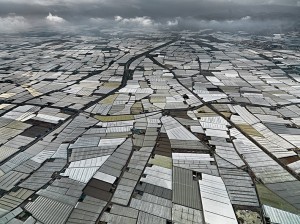 A mix of thousand of smallholders and large companies tend the crops inside the plastic greenhouses. Temperatures can reach more than 45 degrees Celsius inside. Many Spanish workers find it too hot to work and the conditions too brutal so the sweat-houses are staffed mainly by legal and illegal immigrants from Africa and Eastern Europe. One hundred thousand immigrants are thought to work in the greenhouses and many believe it is the lack of workers-rights that help the businesses to be profitable. Many ‘farms’ have no toilets and women are often forced into prostitution. Some workers are also sold contracts to work, which have to be repaid to their bosses. The Network for The Promotion of Sustainable Consumption in European Regions, estimate that workers are paid between 33 and 36 Euros per day.

Almeria’s sea of white-roofed greenhouse is so vast that researchers from the University of Almeria have found that by reflecting sunlight back into the atmosphere, the greenhouses are actually cooling the province. While temperatures in the rest of Spain have climbed at rates above the world average, the local temperature has dropped an average of 0.3 degrees Celsius every 10 years since 1983.

The greenhouses are so successful that they have swamped the plain of Dalías, moving up the valleys of the nearby Alpujarra hills, one of Spain’s most pleasant and unspoiled areas. A few small towns in the area have been completely swamped by the white plastic farms. Plastic manufactures and recycling companies have also set-up in the region, where discarded plastic sheeting and rubbish lies wherever blocking up riverbeds. Last month the death of a sperm whale that washed up on Spain’s south coast was linked to the Almeria greenhouses after it was found to have swallowed 37 pounds (17kg) of plastic waste dumped into the sea. Empty pesticide containers bearing toxic warnings lie among the plastic litter. On the coast at El Pozuelo plastic waste is piled calf-high. 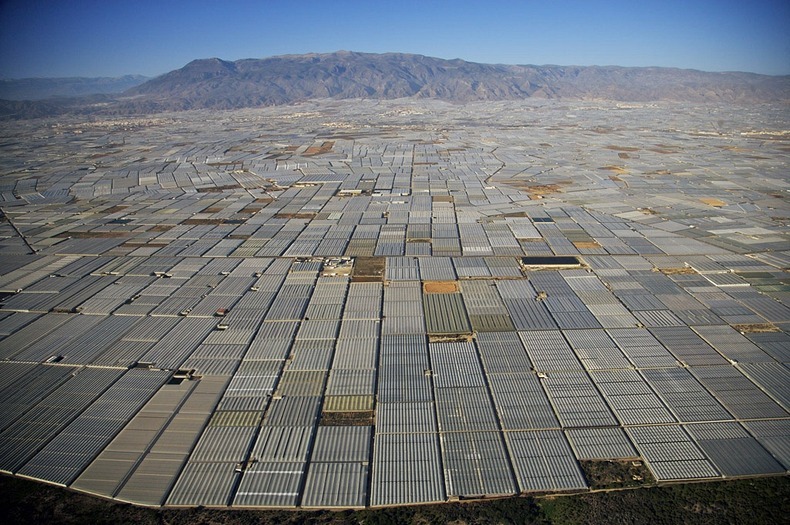 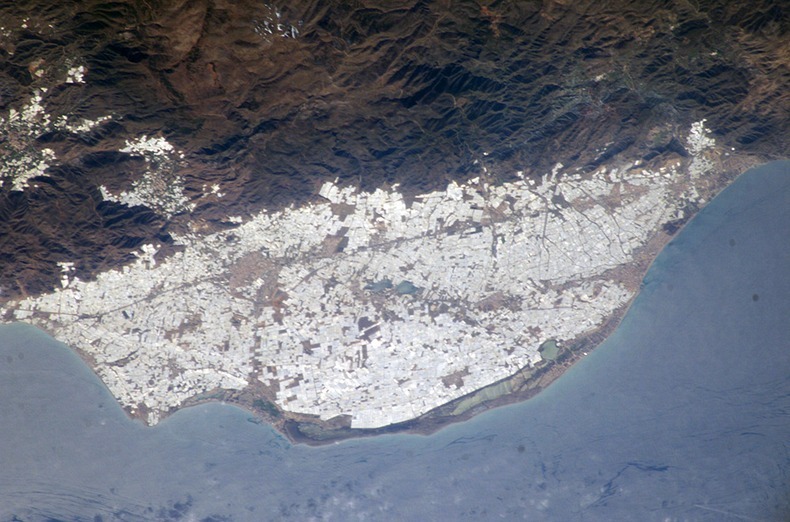 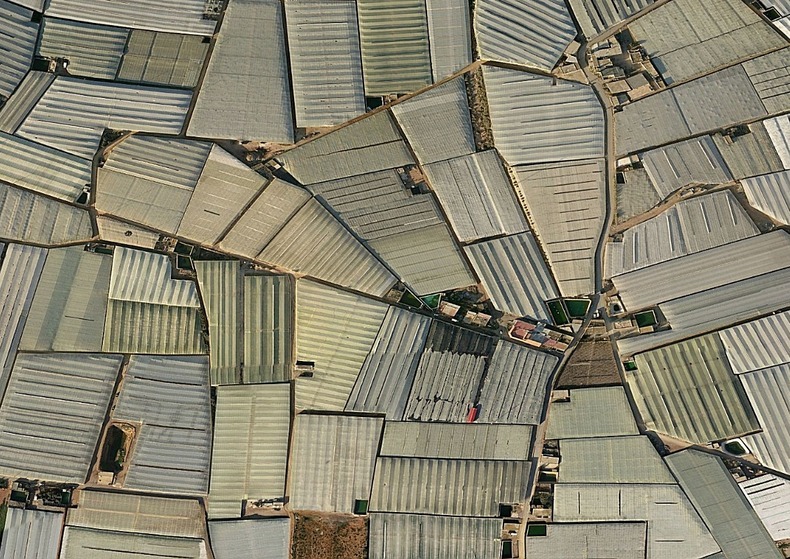 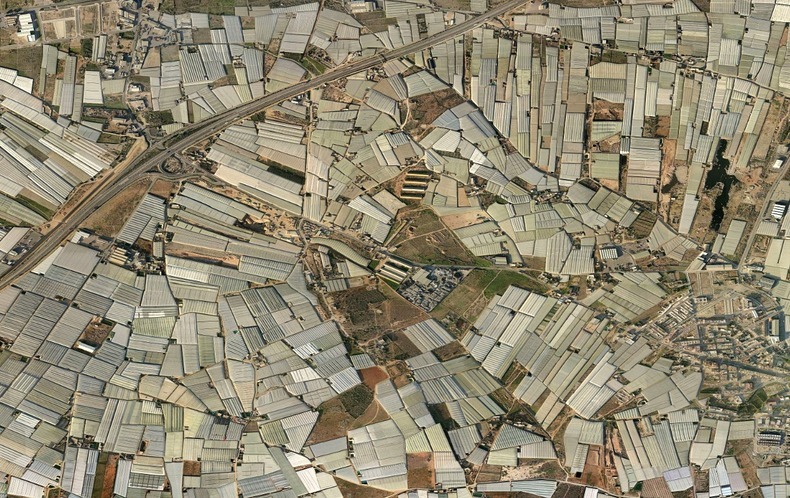 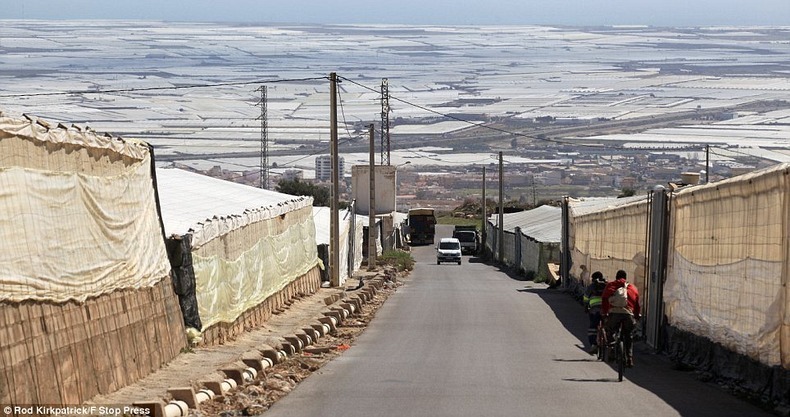 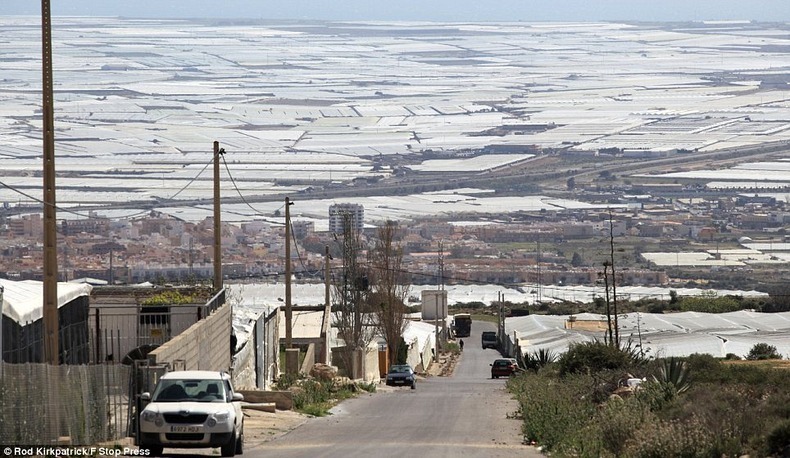 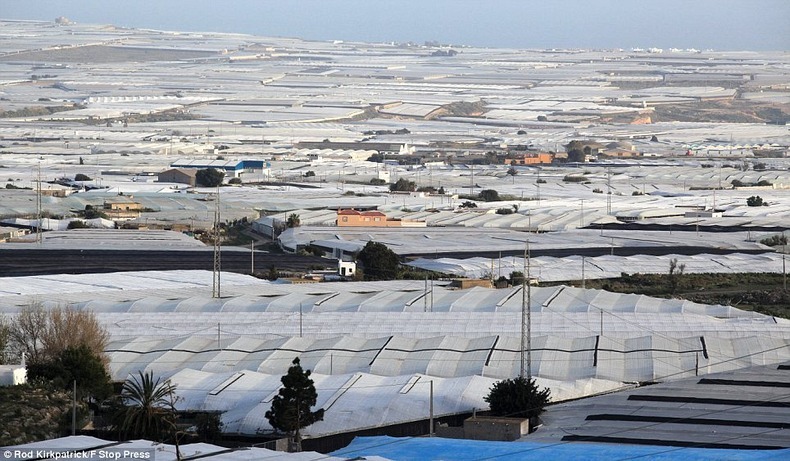 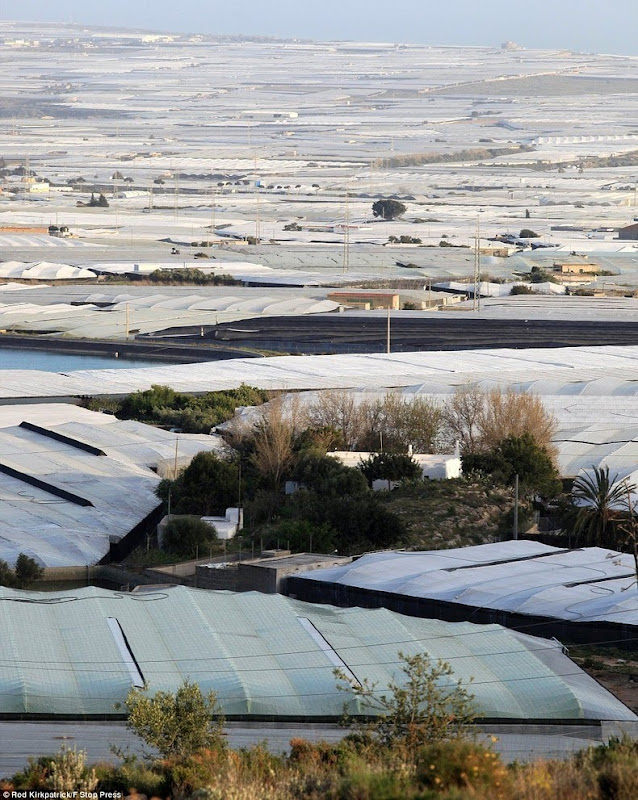 7 Responses to The Desperation of the Human Race