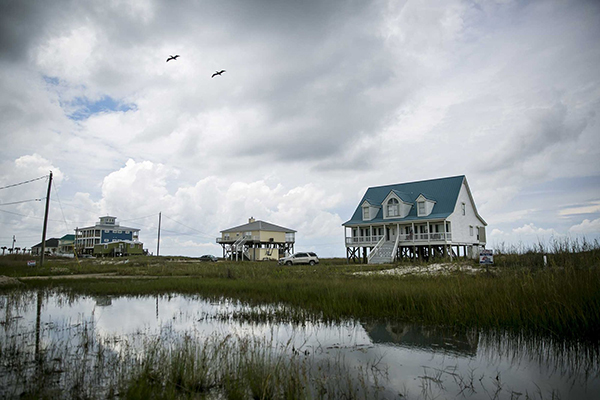 America's coastal cities are preparing for legal battles over real estate that slips into the ocean.

One April morning in 2016, Daryl Carpenter, a charter boat captain out of Grand Isle, La., took some clients to catch redfish on a marsh pond that didn't use to exist. Coastal erosion and rising seas are submerging a football field's worth of Louisiana land every hour, creating and expanding ponds and lakes such as the one onto which Carpenter had piloted his 24-foot vessel.

Suddenly, another boat pulled up beside Carpenter's. "You're trespassing," the other driver declared, before chasing him and his clients down the bayou. The sheriff's office later threatened to arrest Carpenter if he ever returned to the pond. There was just one problem: Under Louisiana state law, any waterways that are accessible by boat are supposed to be public property, argued Carpenter—even what was previously unnavigable swampland.

Carpenter sued the sheriff, as well as Castex Energy Inc., which owns the property around the pond, for interfering with his business. A district court decided against him in March, noting that an earlier ruling found that the territory was unnavigable swampland when the state sold it into private ownership in the 1800s. Carpenter is appealing that ruling.

Carpenter's suit reflects a legal and political dilemma that's beginning to reverberate around the country: As seas rise and coasts wash away, who owns the land that goes underwater? Versions of that debate are taking place in courtrooms, legislatures, and government offices, raising the question of whether and when climate change justifies seizing private property. The stakes are enormous, affecting not just ownership of offshore mineral and fishing rights but also potentially trillions of dollars of coastal real estate.