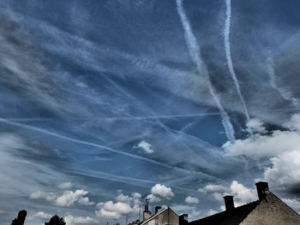 Today, November 2nd, the largest scientific panel ever assembled on any subject in human history has issued the most dire warning yet on the state of the climate. This being said, the assessment still falls far short of stating how horrifically the climate is damaged and worse still the report does not say a word about the catastrophic and ongoing climate engineering programs. In our Orwellian world of total denial and omission the population is still completely oblivious to the fact that our biosphere is imploding. The global geoengineering assault is radically accelerating this planetary unraveling. Though the article below totally omits any mention of climate engineering, and is conservative in its still alarming conclusions, the data it does contain should be evaluated and considered.
Dane Wigington
geoengineeringwatch.org

World’s Scientists Warn: We Have ‘High Confidence’ In The ‘Irreversible Impacts’ Of Climate Inaction

The world’s top scientists and governments have issued their bluntest plea yet to the world: Slash carbon pollution now (at a very low cost) or risk “severe, pervasive and irreversible impacts for people and ecosystems.” Scientists have “high confidence” these devastating impacts occur “even with adaptation” — if we keep doing little or nothing.

On Sunday, the U.N. Intergovernmental Panel on Climate Change (IPCC) released the “synthesis” report of their fifth full scientific climate assessment since 1990. More than 100 governments have signed off line by line on this review of more than 30,000 studies on climate science, impacts, and solutions.

Like every recent IPCC report, it is cautious to a fault — as you would expect from “its consensus structure, which tends to produce a lowest common denominator on which a large number of scientists can agree,” as one climatologist explained to the New York Times. And that “lowest common denominator” is brought to an even blander and lower level in the summary reports since they need to end up with language that satisfies every member government.

The authors clearly understand this is the last time they have a serious shot at influencing the world’s major governments while we still have a plausible chance of stabilizing at non-catastrophic levels. IPCC chairman Rajendra Pachauri said this report will “provide the roadmap by which policymakers will hopefully find their way to a global agreement to finally reverse course on climate change.” That global agreement is supposed to be achieved over the next year and finalized at the December 2015 international climate talks in Paris.

And yet, as conservative as the process is, this final synthesis is still incredibly alarming — while at the same time it is terrifically hopeful.

How hopeful? The world’s top scientists and governments make clear for the umpteenth time that the cost of action is relatively trivial: “Mitigation scenarios that are likely to limit warming to below 2°C” entail “an annualized reduction of consumption growth by 0.04 to 0.14 (median: 0.06) percentage points over the century relative to annualized consumption growth in the baseline that is between 1.6 percent and 3 percent per year (high confidence).”

Translation: The cost of even the most aggressive action — the kind needed to stave off irreversible disaster — is so low that it would not noticeably change the growth curve of the world economy this century. With high confidence, we would be reducing annual consumption growth from, say, 2.4 percent per year down to “only” a growth level of 2.34 percent per year.

How bad can it get if we won’t devote that tiny fraction of the world’s wealth to action? The IPCC already explained that in the science report from last fall (see “Alarming IPCC Prognosis: 9°F Warming For U.S., Faster Sea Rise, More Extreme Weather, Permafrost Collapse”). And they expanded on that in the impacts report (see “Climate Panel Warns World Faces ‘Breakdown Of Food Systems’ And More Violent Conflict”).

The synthesis report ties it all together:

In most scenarios without additional mitigation efforts … warming is more likely than not to exceed 4°C [7°F] above pre-industrial levels by 2100. The risks associated with temperatures at or above 4°C include substantial species extinction, global and regional food insecurity, consequential constraints on common human activities, and limited potential for adaptation in some cases (high confidence).

Translation: There is high confidence that if we keep doing little or nothing [the RCP8.5 case], we will create a post-apocalyptic “hunger games” world beyond adaptation.

Ever cautious, the IPCC euphemistically writes of “consequential constraints on common human activities.” Elsewhere they explain that “by 2100 for RCP8.5, the combination of high temperature and humidity in some areas for parts of the year is expected to compromise common human activities, including growing food and working outdoors (high confidence).”

Translation: We are at risk of making large parts of the planet’s currently arable and populated land virtually uninhabitable for much of the year — and irreversibly so for hundreds of years.

Indeed, the report makes clear that future generations can’t plausibly undo whatever we are too greedy and shortsighted to prevent through immediate action. And as bad as the impacts described in this report are, things will be even worse after 2100 in every case but the one where we aggressively act ASAP to stabilize at 2°C total warming.

And remember, this is a super-cautious, consensus-based, “lowest common denominator” report. The Washington Post has an excellent piece on the inherently conservative nature of these reports and why they “often underestimate the severity of global warming.”

So things are probably going to be much, much worse for our children and grandchildren and future generations if we fail to act. Do we really want to find out just how much worse things could be?