The New Map of the Middle East 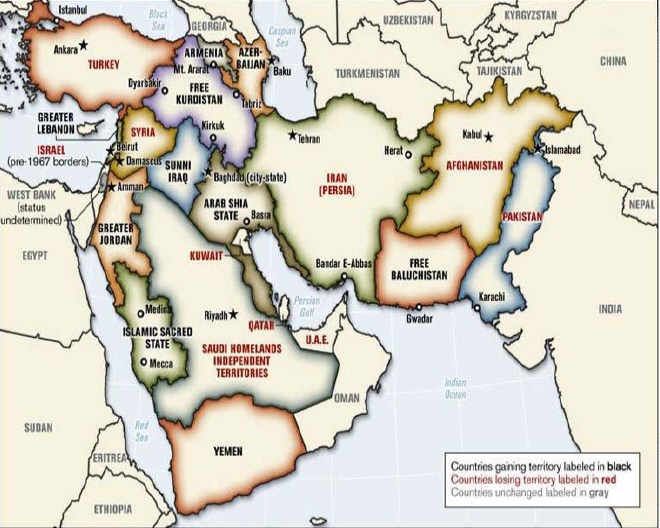 Controversies abound regarding the emergence of ISIS and its intended goal of establishing a Caliphate in the Middle East.

Way back in late 2003 and early 2004, in the course of my research for my book, Future Fast-Forward, the first volume of the Trilogy1 that I completed in 2008, I had discovered that deep within the bowels of the Pentagon, plans were already in place for the implementation of a Grand Strategy to redraw the map of the Middle East. This was confirmed with the publication of the book, The Pentagon’s New Map: War and Peace in the Twenty-First Century by Thomas P.M. Barnett in March, 2004. This was followed quickly by his second book, Blueprint for Action: A Future Worth Creating in October, 2005.

Since then, I have in my numerous articles over the years warned my readers worldwide of this insidious grand strategy. The new map of the war party in the Pentagon would be the end result of their military Master-Plan.

This is nothing new, for this latest Grand Strategy is but the new version on the Grand Strategy of 1916 devised and embodied in the Sykes-Picot Agreement for the carving up of the then Middle East between the Bfritish and French Imperial powers. Please look at the map of the Middle East prior to WWI. There was no Syria, no Iraq, no Jordan, no Saudi Arabia etc. These states were the creation of the war party. WWI allowed the war party to “create a new map”.

Now, please go to my website: www.futurefastfoward.com and go to the Main Page. Scroll down to 8th September, 2014 postings and look for Must Watch Videos where I posted the interview given by General Wesley Clarke. Watch it at least three times and let his observations sink in. The fact that this former NATO Supreme Commander was surprised by what he was told by his former subordinates is a clear indication that he was not in the loop way back in 2003, and this says a lot about the war party planners within the bowels of the Pentagon.

The war plans evolved over the years with the latest version – the use of “useful idiots” in the shape and form of Muslim Jihardists, brainwashed and programmed to kill by the very enemies they were told to destroy, i.e. the Great Satan!

But, what is truly remarkable is how Muslims the world over having declared that Western Imperialism is the sworn enemy of Islam is now being armed and financed by the very Western imperialist powers led by the Zionist Anglo-American war party.

Now, go to my website again and watch also the video that I posted on the 8th September, 2014 where Zbigniew Brzezinski explains how he used Muslims (the then useful idiots) to fight the Soviet army in Afghanistan for the Zionist Anglo-American war party’s interests. Osama bin Ladin was their key instrument!

Fast forward to today. Examine below the Old and New maps of the Middle East. 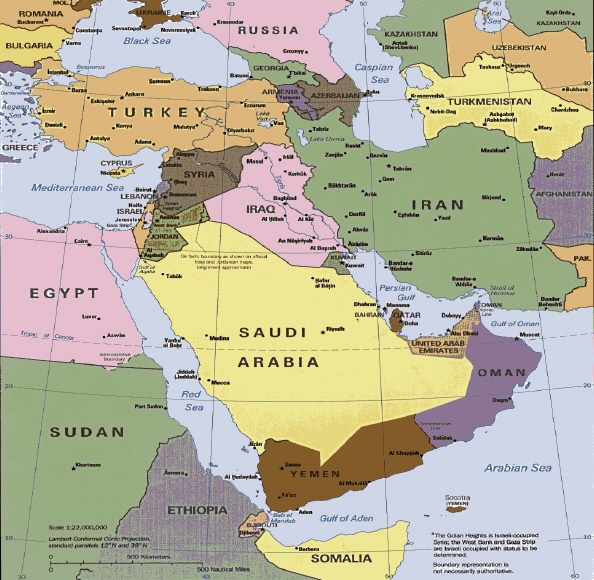 Having being exhausted militarily, politically and financially, the Zionist Anglo-American war party agreed that there is a need to use once again “useful idiots” in the shape and form of Muslim Jihardists (ISIS and what not) whose anger and frustrations needed to be diverted from the real enemy to a substituted and false enemy – fellow Muslims labelled as deviants and false Muslims.

The war propagandists are already ten steps ahead. They are now saying that ISIS is “Mary Poppins” when compared to another “secret” Muslim Terrorist Group! Panic grips the fragile minds of the sheeples in US and Britain. Liberty must be sacrificed for a police state to secure “democracy” and “freedom”. This is a time-tested recipe to control and oppress the sheeples for another long war. Recall that the title of Thomas Barnett’s book is The Pentagon’s New Map: War and Peace in the Twenty-First Century. Another century of war – perpetual wars for perpetual peace!

Hence, the call to arms to rise up against the false Muslims which are conveniently labelled as the Syrian government, Iraq and Iran, thereafter the countries in Central Asia where there are sizeable Muslim populations.

The battle cry “Allahu Akbar” is enough to galvanize Muslim Jihardists brainwashed in Britain (from Bradford, Birmingham, Brixton etc.) by trained Muslim informants under the tight leash of the British intelligence services and despatched to the battle fields designated by their British masters.

So, it should not be a surprise that the “jihardist” that beheaded the US and British journalists spoke with a British accent and is from “Mother England”?

Yet, the British sheeple and even the so-called “progressive” political leaders and the alternative media find it so difficult to comprehend this insidious false flag operation. And when Parliamnent and Congress call on their sheeples to go to war to “avenge” this barbaric murder (no more barbaric than the torture and murder of innocents in Abu Ghraib and Guantanamo Bay etc.), they would respond without hesitation to be cannon fodders.

Finally, when ISIS has SERVED ITS PURPOSE, the Zionist Anglo-American war party will discard them like old rags, and move on to another war agenda.

Therefore, there is nothing that has not been tried and tested in the past and proven useful to the war party.

To all my friends, there is absolutely nothing to debate as to how and why ISIS was created and now deployed to do the bidding of the Zionist Anglo-American war party.

Our focus, if you are minded to do something about the ongoing wars and future wars, should be to expose this grand strategy and the war agenda of the war party. Period!

God bless you all.

3 Responses to The New Map of the Middle East