The Post-Tribune And The Geoengineering Elephant In The Room 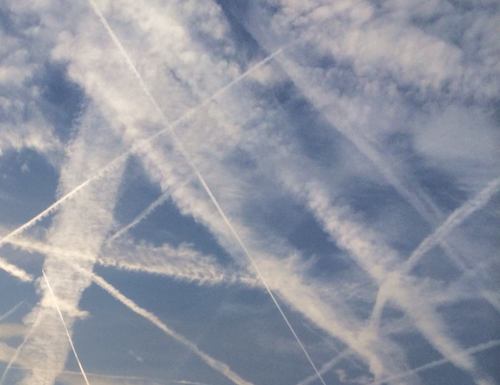 Share861
Tweet
+1
Share
Pin1
862 Shares
The climate engineering elephant in the room is getting hard to hide. It is becoming ever more clear that phones and emails are ringing off the hook in the offices of newsrooms and public officials by people that want answers on the climate engineering insanity. We must continue this trend and increase the pace even further. Of course the Post Tribune finds an “expert” to say it isn’t so and that the public is just making it all up and does not understand the “laws of physics”. Why should we believe that it’s only “condensation trails” in the sky? Because the “Weather Channel” says so. Never mind that we have film footage of tankers spraying at altitude with the nozzles clearly visible and with the spray being turned on and off. Never mind the fact that lab tests from around the globe prove beyond doubt that we are all being buried in under massive amounts of toxic heavy metals that match climate engineering patents exactly. Just throw your sense of deductive reasoning out the window because the paid liars at the Rothchilds owned weather channel say it isn’t so. To cap it off, Jerry Davich from the Post Tribune delivers his final “conspiracy theory” insinuation by quoting an establishment trained “professor of sociology” who says we are all just choosing to believe legends of our own creation. We must hold these people accountable. Don’t stop phoning and emailing them until they show the courage to stop lying and start telling the truth.
Dane Wigington
geoengineeringwatch.org 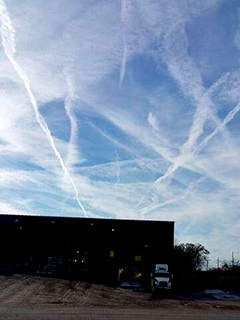 Look, up in the sky. No, seriously.

Are they simply contrails from jet airplane engines, which have been leaving exhaust-related plumes for decades? Or are these murky streaks something more?

Possibly “geo-engineering” at work or chemical trails (“chemtrails”)? Or more radical explanations, such as human pesticides, biological agents and weather pattern manipulation, as I’ve been told by critical observers. Conspiracy theories, you say?

“I’ve seen contrails. These are different,” he insisted, pointing to a ton of Internet information and conjecture on this topic.

“I’ve studied chemtrails for a while now, but this was the first time I saw them happen for myself,” he told me earlier this week. “My experience today helped solidify my beliefs that planes are dropping something on an unsuspecting public.”

On that day, our Northwest Indiana skies were littered with these cloudy white streaks going every direction. I always assumed they were created by jets flying to and from the two Chicago airports. Not so, claims Reed and others.

“The planes were crisscrossing and making 90-degree turns right before my eyes,” said Reed, a sanitation worker for Portage. “The trails they left acted in accordance with everything I have come to know about them. They left a murky cloud-like haze that did not evaporate. They are real and shrouded in mystery.”

Mystery indeed, until you talk with a university chemistry professor or meteorologist from The Weather Channel.

“There is a very basic scientific explanation for these chemtrails,” said Kory Stiffler, a visiting assistant professor of chemistry, physics and astronomy at Indiana University Northwest in Gary. “They are essentially trails of water vapor left by the exhaust of airplanes, which condense in the cold air and form little trails of clouds, the same way a regular cloud is formed.”

It’s all Physics 101, a course he teaches every semester.

Meteorologists from The Weather Channel agree, telling me that when weather conditions are just right, jets leave behind a streaming contrail cloud.

“Some conspiracy theorists believe these are trails of chemicals released by planes. However, that is not the case,” a Weather Channel spokeswoman told me.

In simplest terms, such conditions need a rather high relative humidity but below the point of saturation, with no clouds. A slight change in air temperature can lead to this condensation.

“Relative humidity is when temperature and dew point are close together,” the spokeswoman said. “When the temperature drops to the dew point, this is when you get the condensation or clouds, or contrail in this case.”

Reed and other critics of such scientific explanation don’t believe it.

“Why do people refuse to believe that geoengineering is real?” asked Reed, who took a photo of the sky that day, which accompanies this column. “We’ve seen what governments can do, with cases like Agent Orange in Vietnam and other instances of chemical warfare.”

Reed is certainly not alone with such thinking locally. I’ve heard from many other readers about these contrails or chemtrails, especially this past year.

“They’ve been doing it for years but people are finally starting to realize what’s happening,” said Kathy Parsons of Gary.

Many of them insist doubters watch the 2010 documentary film, “What in the World Are They Spraying?” which reportedly reveals the chemtrail-geoengineering cover-up.

This is how it’s billed: “Here is the story of a rapidly developing industry called geo-engineering, driven by scientists, corporations, and governments intent on changing global climate, controlling the weather, and altering the chemical composition of soil and water — all supposedly for the betterment of mankind.” But, “the effect has been devastating to crops, wildlife and human health. We are being sprayed with toxic substances without our consent.”

Reed, among others, is a believer.

“I believe it’s aluminum and possibly barium and strontium,” he said.

“Possibly to block solar rays to slow global warming,” he said. “Possibly to experiment on the population. To destroy plant life. To destroy soil on independent farms for big agriculture interests. Weather manipulation. There are numerous possibilities.”

“People can make all the tinfoil hat jokes they want, but I’m scared,” Reed said. “I don’t live my life based on fear, but this is so strange.”

From a sociological perspective, this is called a “contemporary legend,” contrary to an urban legend, used to differentiate modern legend from traditional folklore in preindustrial societies.

This type of legend reflects contemporary circumstances and paranoia about unseen enemies and threats to our country, such as “enemy agents,” “big government” or “big brother.”

As the sociologist W.I. Thomas taught us, “What people define as real becomes real in their consequences.” Even though the stories may not be real at all.

“Remember, it doesn’t mean these contemporary legends are real but simply that people believe them to be true and what such beliefs say about urban life and perhaps even history,” said Charles Gallmeier, professor of sociology at IUN.

Again, I tell you, look up in the sky. But also look in your psyche and your gut before coming to your conclusion.