The Threat From Climate Disintegration Is Not Coming, It’s Here

The IPCC (Intergovernmental Panel on Climate Change) is the largest scientific panel ever created on any subject in human history. Many have, unfortunately, chosen to believe this panel of scientists is paid to put out falsified "alarmist" data. The reality is this, yes, the IPCC has put out a great deal of false and misleading information, but in the exact opposite direction of what many have convinced themselves of. The threat we face is not off on the horizon somewhere, the climate and biosphere implosion is here, now, and the entire web of life is at stake. Government sponsored organizations like the IPCC are tasked with masking the true extent of climate disintegration, not disclosing it. Once the wider population fully awakens to the truth that the biosphere is indeed imploding and that we have all been forced to be a part of a massive and highly toxic climate engineering experiment (which has helped to fuel the overall planetary meltdown), panic will ensue. What other steps have governments taken in the attempt to hide the converging cataclysms and the climate engineering insanity? The US is firing many climate scientists and putting illegal federal gag orders on the rest. On the other side of the planet US ally Australia is doing the same. In the meantime, the carbon industry continues to fund a constant parade of disinformation while the Arctic melts and heat records continue to topple. Global climate engineering is further fueling the planetary meltdown from every direction. If the human race does not completely and immediately alter its current course, "Venus syndrome" will be the final destination. Though the report below does not cover the geoengineering factor, the front line assessment of biosphere damage is on target.
Dane Wigington
geoengineeringwatch.org 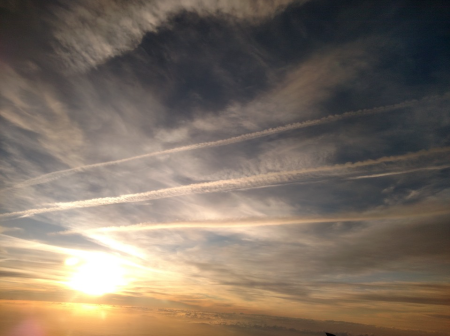 Could This Be Our Biggest Blunder On Climate Change?

In the early years of the Inter-Governmental Panel on Climate Change, the IPCC, we were introduced to what was presented as a long-distance, multi-generational phenomenon. We were told if we didn't change our ways things would be pretty rough for those who would follow us two or three generations down the road.

Take Arctic sea ice, for example. The IPCC warned us, not that long ago, that if we continued with our usual fossil energy pattern the Arctic could be "ice free" by 2100. To forestall that we were told we needed to sharply cut our carbon emissions and rapidly transition to a clean energy economy.

2100, they might as well have said 4100. A number of studies have shown that it's human nature to see numbers as distant as 2100 as almost irrelevant. People will sacrifice if necessary for their children's survival. They might even entertain some sacrifice if they perceive a realistic prospect of harming their grandchildren. But 2100, 84 years from now? Who cares? They can't connect themselves to that. It's too distant. Why should they sacrifice now for something that might, might benefit people they can't even envision that far down the road?

You know what does work, what does motivate people? You may see it soon enough. What works is when people see what's barreling down on them – here, now, or in the next ten to twenty years. That gets their attention.

Florida. When it comes to climate change many Floridians have been dead from the neck up until very recently. Three words – sea level rise – and the switch was flipped. The governor may still be brain dead but people with those lovely waterfront homes and condos woke up from their collective coma. They began to understand that the seas were going to rise and this was not a good thing when you own low-lying waterfront property. They began to understand the climate change Trifecta – sea level rise, high tides and storm surges. People began to learn what that holds in store even for their utilities – electricity, fresh water and that all important one, sewage.

Let's go back to the Arctic and that sea ice business. 2100 was the date until just a couple of years ago when the US Navy said its people figured the Arctic would be ice free for navigation by 2020, perhaps even as early as 2016. Guess what? It's going to be ice free for navigation this year and, if not, next year for certain. What ever happened to 2100? In 2010 they were telling us 2100. They were only out by 84 years. How in hell did that happen? What else did they get wrong? Plenty, it seems.

That magical 2C target? Well that was a political number ginned up by – you guessed it – the same people who said the Arctic would be ice free by 2100.

At the Paris climate summit last December, even our politicians could no longer put up with that 2C nonsense. So they came up with a new nonsensical figure, 1.5C. That was the new, "never exceed" number to avoid catastrophic global warming.

The scientific community was quick to point out that, with the existing atmospheric loading of persistent greenhouse gases, we've already locked in 1.5C of warming. In a combination of sarcasm and anger they pointed out that it was a great target but it meant decarbonizing our economy and our societies now, immediately.  In other words, that horse has left the barn. Our enviromin, Ms. McKenna can say she's going to close that barn door but she's just blowing smoke up our backsides.

How could the IPCC get it so wrong? How could they warn of an ice free Arctic in 2100? How could they not see it coming by 2016? Here's an explanation. They were working on man made emissions. They didn't factor in tipping points and natural feedback loops. Humans may have pulled the pin but the grenade that's going off up at the pole, that's a natural feedback loop. That's nature's doing. It's part of runaway global warming. No point fretting about tipping points when the canoe has already turned turtle.

This is where the scientific debate on global warming comes in. Scientific debate? What debate? That's over, surely. 97% of climate scientists have reached a powerful consensus, right? Oh sure, they've agreed that 1) climate change is very, very real, and 2) that climate change (or the aspects of it that were in dispute) is man made. But that's not today's debate. The current debate is whether we can arrest global warming or have we already left it too late.

Climate science is tough, demanding work. It's not for the faint-hearted. There have already been casualties. Some just can't bear it and leave the field, taking a teaching post or doing industrial research. Some have succumbed to depression, something akin to climate PTSD. Some, like Guy McPherson, have thrown in the towel and now spend their time chronicling tipping points we've already passed. (A word of caution. The information at that link will be deeply unsettling. Proceed with care.) The rest, those who soldier on, figure out whether we can still arrest global warming and how we can prepare for what's coming. There aren't a lot of cheerleaders in that crowd.

"This is a cultural clash for the hearts and minds of people and at stake is the future of the planet." Can you imagine sitting down to that grim notion at your desk every morning?

We allowed climate science to be politicized, transformed into another front of our culture wars. What madness.  Along the way the narrative got hijacked, ginned up, corrupted.

What if we had said, forget about 2100, you'll be taking a hammering by 2020 or 2025? In other words, this isn't some abstract notion that may affect people that aren't even born yet. This is a reality and you will have to deal with it.

2020 that's the predicted arrival date of what's being called "climate departure." Think of it as the abrupt transition from "old climate" – the climate you've known all your life – into a "new climate." One of the hallmarks of this new climate is that every year of the new climate will be hotter than the hottest year ever experienced in the old climate. There won't be any cool years, only very hot years.

Climate departure is supposed to set in first in areas such as the Caribbean, Central America and in equatorial regions elsewhere. Insufferable heat will be one problem but heat brings any number of knock-on effects – severe weather events of increasing intensity, frequency and duration; disease and pest problems; disruption of freshwater resources, on and on and on. If you haven't been following conditions across Central America you should know that they're already on the ropes, have been for years. Here, here, and here.

Climate departure will spread, sort of like the "creeping damp," until it's everywhere by 2047. It's not to say that cold places will be as hot as more tropical regions. They won't. They'll just be consistently hotter than they ever were prior to the "new climate" era.

As the Telesur article points out, America will soon be facing a major climate migration problem on its southern borders as today's trickle of migrants, about 10,000 a year, becomes a tide of people in search not of better paid jobs but survival. In case you're wondering, America is not planning to throw open her doors to a horde of climate migrants. I don't want to get into how they're planning to stop them.

In other words, our great blunder, this illusion about distant events in 2100, long after we're safely gone, may be erased from our minds by climate events overtaking our serenity and ease over the next five to ten years. Will that be enough to shake us out of our complacency toward climate change? Will we become willing to accept what must be done to upgrade our own economy, our society, even our governance? I don't know but we won't have long to wait for the answer.

101 Responses to The Threat From Climate Disintegration Is Not Coming, It’s Here