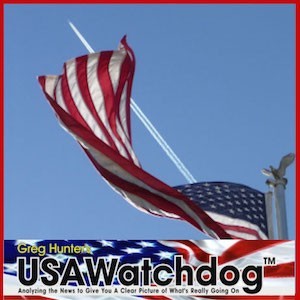 This is the latest interview on Geoengineering from Greg Hunter (11-28-17) Greg Hunter is a highly respected veteran news reporter who has worked for many major news networks in the past (including CNN). Greg continues to make his voice heard as the producer and creator of USAWatchdog.com, now without the censorship and restraints put on him from corporate media overlords. Greg has the courage to thoroughly address the most critical issues that most of his peers are afraid to even mention. In the article and video below USAWatchdog helps to shine the light on global climate engineering and the planetary devastation it is causing. The 33 minute video in Greg Hunter's article below is the latest update from USA Watchdog on the global weather warfare assault.
Dane Wigington
geoengineeringwatch.org

Geoengineering researcher Dane Wigington says recent Senate hearings confirming the science of geoengineering means dangerous climate changes are underway.  Wigington says, “They (many disinformation sources) have to control the message, they almost exclusively use the term ‘chemtrails’ because that term leads to a dead end (conspiracy theory and hoax definitions).  It’s not a scientific term, and they want us to use that term.  You don’t see them using the geoengineering, climate engineering, solar radiation management and aerosol injection term because they (mainstream media and disinformation sources) don’t want people to understand the legitimacy of this issue.  Why the Senate hearings?  Because the elephant in the room is now all but impossible to hide, and they are trying to pacify populations until the last possible moment.  They want to tell the population what they want to hear–that this is only a proposal.  They are saying this (geoengineering) must start immediately when this has been going on for 70 years . . . this is the Orwellian world we live in.  We have massive toxic aerosol, heavy metal spraying in our atmosphere that could not be more visible.  It’s blotting out the sun. . . . These programs are completely out of control. . . .We are on the road to planetary omnicide. Climate engineering is the greatest and most immediate assault we face.  Climate engineering, look at this like the pharmaceutical approach to planet earth.  Hide the symptoms even if you are making the overall situation exponentially worse.  That’s what they are doing.  We have had these radical whiplash weather scenarios where it goes from 80 to 90 degrees to snow in a day or two.  This weather whiplash is not natural in any way, shape or form.”

Wigington contends that the situation is much worse than most yet understand, climate engineering is a primary causal factor. Wigington explains, “Our situation is far more dire and immediate than anyone yet comprehends, and climate engineering is making it worse not better.  Official statistics say 20 million people could starve in the coming months, and that number will increase exponentially.  The biosystems of the planet are imploding.”

A team of attorneys working with GeoengineeringWatch.org and Stop Geoengineering Minnesota is suing to get NOAA (National Oceanic and Atmosphere Administration) to give up its climate engineering information and has hit a brick wall. Wigington contends, “There is no hiding from what’s coming. . . . NOAA is not returning our FOIA’s, Freedom of Information Act requests. They are legally required to give those to our attorneys, and they are not doing that.  In fact, NOAA, in essence, flipped us the middle finger by sending back FOIA’s saying they know nothing about any sort of weather modification anywhere ever.  Think how absurd this is when there are 300 regional weather modification programs that NOAA is required to sign off on every single year (in the contiguous 48 states).  They are denying all of it.  This is the biggest cover-up in human history, with the largest most extensive operation in history, with the cooperation of governments around the globe.  That is not speculation.  You have to look and understand the gravity of the situation that is unfolding.  Countries around the globe, whatever you are focused on, if it’s not saving the life support systems of the planet, everything else amounts to arranging deck chairs on the Titanic. . . . This is the single most destructive endeavor ever launched by the human race.  Mathematically, it’s the greatest threat we face short of nuclear catastrophe.”

There are thousands of documents, research papers, videos and numerous scientific sources compiled by Dane Wigington on GeoEngineeringWatch.org. You can access the voluminous data on the site free of charge. If you want to donate to GeoengineeringWatch.org, go to the home page and look for the “Donate” button in the upper right-hand side of the page. GeoEngineeringWatch.org also has a snail mail address, as well.

Wigington has passed along a few links to help get people started, such as this one called “Climate Engineering Fact and Photo Summary.”

GeoEngineeringWatch.org also regularly gets experts in the field to go on record as a former NASA scientist did a few weeks ago in a post titled “Ozone Layer Collapse, A Former NASA Contract Engineer Warns of Planetary Omnicide.”

You can do a deeper dive by looking at the 1978 U.S. Senate document laying out Geoengineering for the planet.