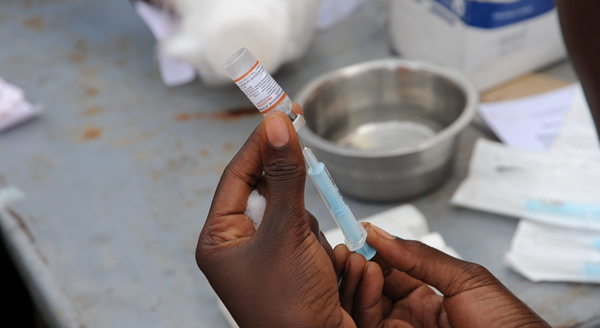 Over the last 17 years, I’ve read hundreds of medical journal articles on the problems associated with vaccines. I have written and spoken about vaccine contaminants – stray viruses, aluminum, mercury, polysorbate 80, animal cells, and so on. I have often wondered “What else is coming through that needle?”

This article, “New Quality-Control Investigations on Vaccines: Micro and Nano-contamination” published on January 23, 2017, in the peer-reviewed journal, the International Journal of Vaccines & Vaccination absolutely blew me away.

Here is a snapshot from this must-read, full-text article:

A team of scientists in Italy decided to examine batches of vaccines, looking for contaminants not listed as ingredients. 44 types of vaccines manufactured in Italy and France were analyzed using an Environmental Electron Scanning Microscope. This method was chosen because the matter can be separated into either organic debris (called aggregates) or inorganic debris (called clusters). The identified particles were counted three times by three different operators, with an error rate of less than 10%. They found inorganic contaminants in every single one.

The presence of micro- and nanosized particulate matter, composed of inorganic chemicals, metals and combination elements whose presence is inexplicable.

The particles are foreign bodies, and can produce a chronic inflammatory reaction because the particles cannot be degraded. The tiny nanoparticles can enter the cell nuclei and interact with cellular DNA.

The inorganic particles are neither biocompatible nor biodegradable, that means they are biopersistent. They can induce immediate effects or the effects may be delayed for a long time after administration.

Indentifying Aluminum and NaCl is obvious because they are commonly used in vaccines and they are declared components, but the other materials are not supposed to be in vaccines or in any other injectable drug.

In most circumstances, the combinations detected are very odd. They have no technical use, cannot be found in any material handbook and look like form randomly, for example, when waste is burnt. In any case, whatever their origin, they should not be present in any injectable, let alone in vaccines given to infants.

While the entire article was disturbing, I found this little paragraph to be the most eye-popping of all:

Why would a shot used for allergies (Allergoid) be loaded with aluminum, which is known to cause allergies?

Why would a cat vaccine have no contaminants, while vaccines destined for humans are loaded with toxic particulate matter?

If these vaccine contaminants are due to sloppy manufacturing, the animal vaccine should be contaminated with the same elements, which includes titanium, tungsten, stainless steel, chromium, nickel, aluminum, iron and a very long list of combination formulated compounds such as SiAlSBaFe (silicon + aluminum + sulfur + barium + iron), a particle found in the European flu shot, Agrippal, and AlSiMgTiMnCrFe (aluminum + silicon +magnesium + titanium + manganese + chromium + iron) a particle found in Repevax, one of many European DTaP vaccines.

On a side note, Repevax is one nasty vaccine. In addition to the large particle named above, the vaccine contains diphtheria and tetanus toxoid, 4-in-1 pertussis antigens, and three polio viruses. The vaccine is produced in VERO cells from African monkeys. It has residual formaldehyde, glutaraldehyde, streptomycin, neomycin, polymyxin B and bovine serum, all used during the manufacturing process. For good measure, 1.5mg of aluminum phosphate is used as an adjuvant and polysorbate 80 and phenoxyethanol are present as excipients. It is approved for use in children 3yrs of age and over, adolescents and adults. Would you want this injected into your body, or the body of your child?

Table 1. Summary of types of nanoparticles found in 44 tested vaccines

What about these metals?

According the article, “Toxicity and Carcinogenicity of Essential and Non-Essential Metals,” the metal particulates identified in these vaccines could be causing serious harm. Here are three:

I have long believed that the chemicals or viruses – or something else – in vaccines contributed to the spectrum of brain injuries seen in both children and adults. The frontal lobe of the brain, the area behind the forehead, is where empathy is expressed. If this area is damaged, a personality disorder can emerge where a person can no longer appreciate or comprehend the emotions of another. Without compassion, they can intentionally harm others without regret.

Are we seeing this today in our society, in many of our young people? Vaccination at birth with the hepatitis B vaccine begain in 1991…26 years ago. The ramp up of the vaccine schedule started then and today, children are subjected to 50 doses of 14 vaccines before age 6, and 69 doses of 16 vaccines by age 18. Across the US, the number of college students taking antidepressants skyrocketed between the 1990s and 2005. Estimates vary, but it has been estimated that up to 50% of all students seen at student health centers are given a prescription. The violence on college campuses has grown exponentially. One in 5 women and one in 16 men are sexually assaulted on a campus. Rape is the most under-reported crime; 63% of sexual assaults are not reported to police.

Are the inorganic contaminants in vaccines delivering a knock-out punch, leading to brain injury specifically in the frontal lobe?

Could vaccines finally be proven to be the smoking gun in both bad health and bad behavior?

The next step is testing all approved vaccines being used in the US. Until that can be done, a complete moratorium on all vaccination should be ordered to save the next – and current – generation of children.