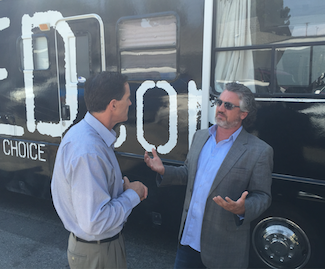 The recent double screening of the profoundly important VAXXED documentary in Northern California was a big success in spite of the total media blackout of the event.  Hundreds of Northern California citizens attended this free public screening along with many more from further south in the state, and from other parts of the country. Connecting with Del Bigtree was a great pleasure and a true honor. At this most critical "time of universal deceit", when "telling the truth is a revolutionary act", Del is a shining example for us all. This 11 minute interview with Del gives a glimpse into one of the primary driving personalities behind the critically important VAXXED documentary.
Dane Wigington
geoengineeringwatch.org