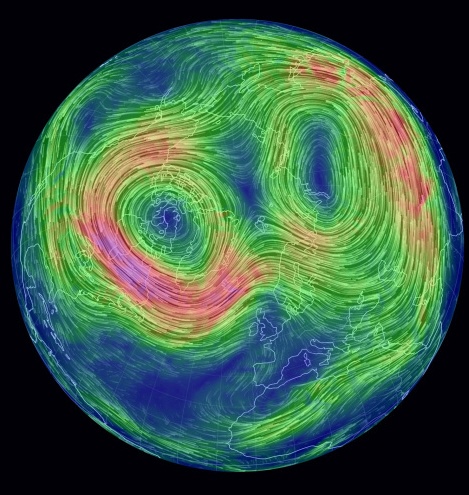 Last night, at around 9 PM Eastern Time, a broad region just south of the North Pole was undergoing an extraordinary warm-up. Temperatures along the 37 W Longitude line just 80 miles south of the pole had surged to 33 degrees Fahrenheit. A reading warmer than a region of central Michigan thousands of miles to the south but running over an area of sea ice more accustomed to -5 F or lower temperatures during the great dark of the December night. 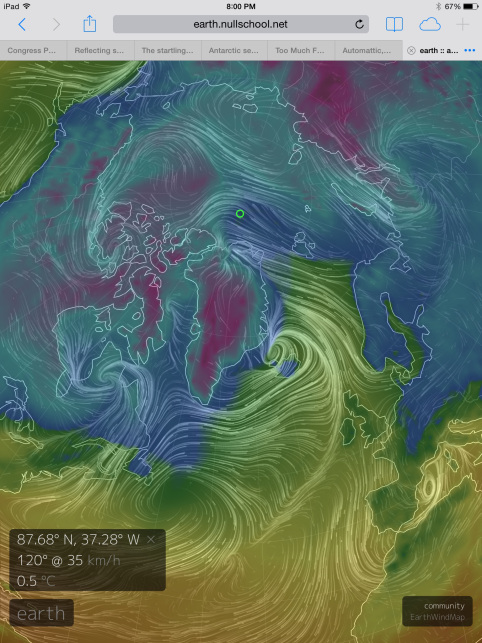 It was the much warmer than normal core of an intense and anomalous Arctic heat surge. One that blasted up over Svalbard and flooded into the high Arctic. Meeting with a similar but weaker air surge to the south, both surface and upper layers of the Arctic Ocean atmosphere hosted a joining of rivers of warm air.

This warm air double envelopment neatly sliced the polar vortex in twain. The remnant cold air cores at the Jet Stream level slipped down over both the Canadian Archipelago and Central Asia. Leaving open the lane for warm, maritime air to surge over the Arctic Ocean region. 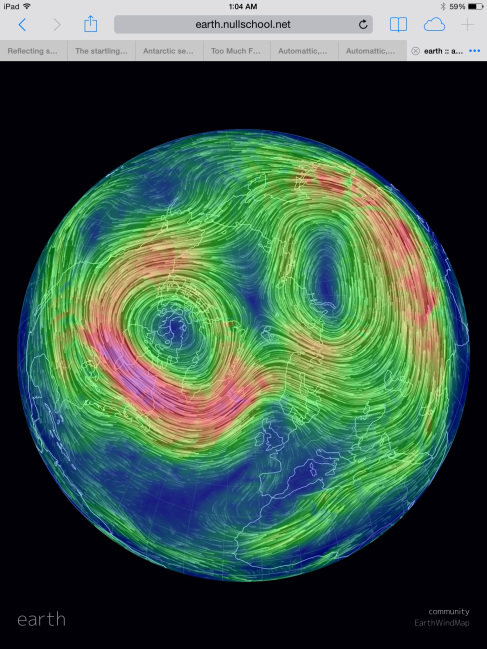 It is a pattern of negative phase Arctic Oscillation (AO) — featuring a warming in the central Arctic which flushes the cold air out. But this ripping of the polar vortex in half is also related to polar amplification due to the human heat forcing. In which the high Arctic has warmed dramatically in comparison with the rest of the globe. So the heat anomalies we see now are much higher than they would otherwise be, with abnormal warmth remaining even into a positive phase of the AO (which we may see a bit more of, should El Nino finally emerge).

It’s a feature also related to a warming of the upper atmosphere at stratospheric levels. Such Sudden Stratospheric Warming (SSW) events can often be associated with the kind of polar vortex split we are seeing now. And, from recent observations, we find temperatures over the Arctic Stratosphere are now in record range.

For much of November, readings in the Arctic as a whole have ranged from +1.5 to +2.5 degrees Celsius above the global average. A region featuring the highest global anomalies in a world that just saw its hottest ten months in the past 136 years, and probably its hottest ten months in many thousands of years. A region well known for its cold — but warming far faster than almost anywhere else. 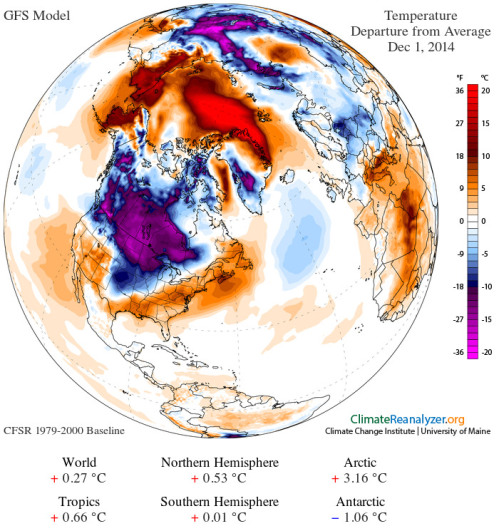 The Arctic hits an extraordinary early December +3.16 C positive anomaly on the first day of the month amidst a flood of warm air from the Atlantic and Pacific Oceans. Image source: The University of Maine. Data Source: Global Forecast System Model

Today, beset by this abnormal heat, overall Arctic departures hit 3.16 C above the already hotter than normal 1979 to 2000 average. Regions within this warm zone showed readings well above 36 F higher than average. A kind of winter Arctic heatwave. One that will keep worsening as the human heat forcing continues its terrible advance.

Near Freezing Temperatures Over Zachariae Glacier During Meteorological Winter

Much of the added heat expanded through the region between the North Pole and Greenland, wrapping in a surface circulation that has tended more and more to envelop the frozen isle, Baffin Bay and the accompanying Canadian Archipelago. 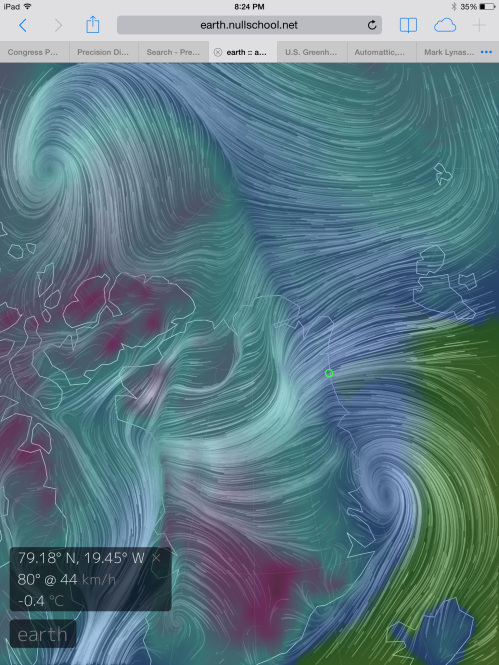 This morning, some of that circulation and its entrapped warm air flow rode up over the East Coast of Greenland, surging over the ocean-facing cliffs of the Zachariae Glacier. Pushing temperatures to almost above freezing in a period where much deeper cold should be firmly established.

A great flood of abnormal winter warmth and moisture. The leading edge of a flow of ocean and atmospheric heat driven all too obviously by human warming.