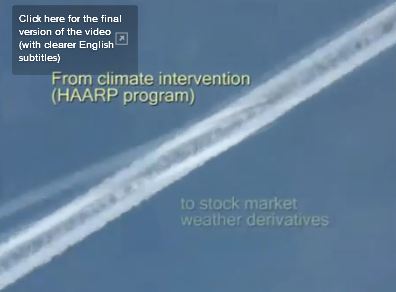 By Enouranois  Produced in Greece: a documentary on chemtrails, HAARP and weather derivatives, English subtitles. (24 mins.)

Ed. Note: The Chicago Mercantile Exchange has allowed trade in weather derivatives since 1997. Per wikipedia: https://en.wikipedia.org/wiki/Weather_derivative
“As the market for these products grew, the Chicago Mercantile Exchange introduced the first exchange-traded weather futures contracts (and corresponding options), in 1999.<—link to articleThe CME currently trades weather derivative contracts for 18 cities in the United States, nine in Europe, six in Canada and two in Japan. Most of these contracts track cooling degree days or heating degree days, but recent additions track frost days in the Netherlands and monthly/seasonal snowfall in Boston and New York. A major early pioneer in weather derivatives was Enron Corporation, through its EnronOnline unit.”

The “Enouranois” website presents and analyses matters of current concern to do with our atmospheric environment.

Atmospheric pollution, the increase in the planet’s average temperature and the “greenhouse” phenomenon have been occupying the scientific world and the international community for several decades. Certain measures have been taken globally (e.g. the Kyoto protocol) and numerous solutions have been put forward or are being researched with a view to retarding the ‘greenhouse’ phenomenon. Most of these solutions focus on the use of renewable energy sources (e.g. solar energy, wind energy, hydro-electric power, etc.). Such forms of energy do not burden the earth’s atmosphere with the familiar pollution derived from the use of coal or oil-based fuels. In recent years new technologies have developed aimed at replacing or moderating the use of the internal combustion engine in transport. More generally, the ecological consequences of human activity and attempts to confront the related problems will be among the subjects with which this site proposes to deal.

But in its endeavour to investigate and inform, the ‘Enouranois’ website aims to put the bulk of its effort into more immediate and pressing concerns in our atmospheric environment. In particular, the site focuses on the following themes:

“Knowledge is power”, as our ancient forebears used to say and believe. Our objective is to inform and enlighten visitors to our website, in a responsible manner, with figures, with scientific documentation and also with realistic analysis and critical thinking.