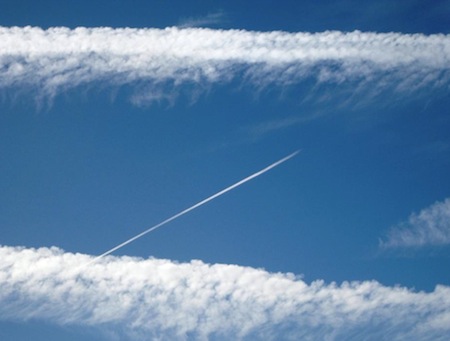 The news cycle this week brings attention to the global warming phenomenon that touches this local economy story, with the U.S. and Beijing agreeing to suppress coal and other means of creating air pollution. The U.S. will double the speed of its current pollution reduction trajectory, which has seen carbon dioxide emissions fall roughly 10 percent below 2005 levels to date, Scientific American says. “The country will now aim to reduce greenhouse gas emissions 26 to 28 percent below 2005 levels by 2025.” China has more coal-burning plants than the U.S., and promises to reach a pollution peak sooner rather than later.

Negative emissions or sky stripes often are laid in the stratosphere here as storm fronts move in. I’ve noticed several time this year that heavy mornings of sky tattooing are followed by deep, dark storm fronts and release no rain, as if the effect of sky striping were desiccation.

A study by Stanford University funded by NASA explains that aerosol particulates floating in the air reduce rainfall and slow wind speeds. The work of managing the sun’s “heat budget” dries up rainfall.

“These aerosol particles are having an effect worldwide on the wind speeds over land; there’s a slowing down of the wind, feeding back to the rainfall too,” says civil and environmental engineering Associate Professor Mark Z. Jacobson, co-author of the study with the late Yoram J. Kaufman from NASA Goddard Space Flight Center. “We’re finding a reduction of rain, and that can lead to droughts and reduction of water supply.”

A press release from Stanford explains how a sky choking with auto fumes (and other sorts). “The accumulation of aerosol particles in the atmosphere makes clouds last longer without releasing rain. Here’s why: Atmospheric water forms deposits on naturally occurring particles, like dust, to form clouds. But if there is pollution in the atmosphere, the water has to deposit on more particles. Spread thin, the water forms smaller droplets. Smaller droplets in turn take longer to coalesce and form raindrops. In fact, rain may not ever happen, because if the clouds last longer they can end up moving to drier air zones and evaporating.”

In other words, spraying aluminum nanoparticulates above a storm system confuses it as the particles drift downward, and rain does not form, even though clouds are darkly burdened with droplets.

Stanford’s news release explains that “Aerosol particles floating in the atmosphere absorb or scatter solar radiation, and prevent it from getting to the ground.” In other words, are are right to notice our sweatless suns, and its extraordinary brilliance starting this year. I have never felt so blinded by sunlight as this year, a perception I attribute not to eyes a year older, but to atmospheric degradation from national weather policy.

Why no objections to environmental modification from the green lobby? Its members should notice that reduced sunlight and wind damage solar panel absorption and wind farm turbine RPMs. In California, Dr. Jacobson estimates, wind speeds are 8 percent slower with its high levels of air pollution (in a state with one of the toughest anti-pollution regimes in the U.S.). “Slower gusts may reduce wind’s economic competitiveness compared to other energy sources, such as fossil fuels,” the Stanford report notes.

“Slow winds may hinder development of wind power in China, where it’s a needed alternative to dirty coal-fired plants. Aerosols’ reduction of the wind also may explain the reduction in the Asian seasonal monsoon and “disappearing winds” in China, observations found in other studies. Moreover, slack air currents may hurt energy efficiency in Europe, where countries like Denmark and Germany have made major wind-power investments.

“Slower winds evaporate less water from oceans, rivers and lakes. Furthermore, the cooling of the ground provoked by the aerosol particles reduces the evaporation of soil water.

Our interest in local economy, self-determination, intelligent and personal commerce, the return of a decentralized political and economic order under the rule of law seems thwarted at every turn. At least in appearance. It seems as though federal intervention in everything from schooling to the good people’s vacuous medium of exchange makes local economy an impossible, fruity concept. To contemplate sky striping makes the ideals of local economy seem even more remote.

‡ In an essay of Prof. Michael Chossudovsky’s website Global Research  (Globalresearch.ca), Amy Worthington, in “Aerosol and Electromagnetic Weapons In The Age Of Nuclear War,” June 1, 2004, describes the lofty U.S. cloud injection program as “sunscreen” to make the skies electrically conductive, a plasma suitable for radar and radio wave transmission, a context for the generation and use of long-term extremely low frequency electromagnetic energy, global in scope. http://globalresearch.ca/articles/WOR406A.html