What Are The Climate Engineers Doing In The Arctic? Astounding Images, And Dead Scientists 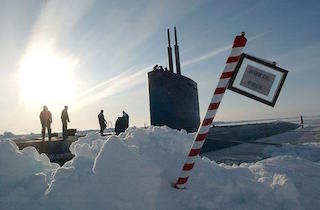 The far north is out of site and out of mind for the vast majority of the population, but the importance of this region to the overall survival of life on Earth cannot be overestimated. The global power structure has long since believed they have the right to experiment with our planet's life support systems. They have always felt they had the right to permanently pollute and poison any region in the biosphere they wish in the pursuit of their agendas. Chemical ice nucleation is a primary tool for the geoengineers. It is a major weapon in their arsenal of insane, toxic, and destructive technologies. Geoengineered snow storms are wreaking havoc around the globe. 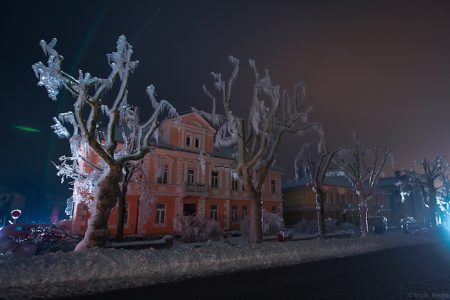 This image is from a record breaking ice storm in Slovenia in 2014. I personally communicated with contact in Slovenia who stated their citizens feel the country was the target of NATO climate modification programs because they were not complying with global power structure mandates and policy.

Chemical ice nucleation is a reality, lab tests prove this beyond any doubt. The 5 shocking satellite photographs below were taken in the Arctic Ocean on September 15th, 2015. What these images show is extremely anomalous ice formation in open water, far from any existing remaining ice. They also show extensive geoengineering aerosol cloud cover with very clear radio frequency signature patterns (my sincere thanks to anti-geoengineering activist Cori Gunnels for locating these alarming Arctic Ocean NASA satellite images). 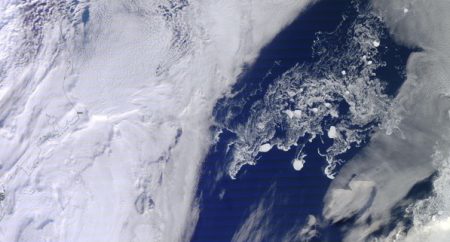 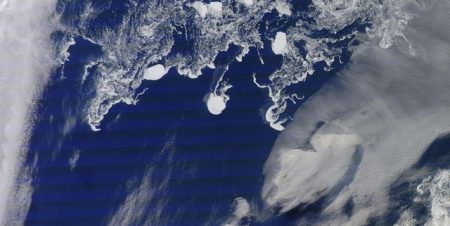 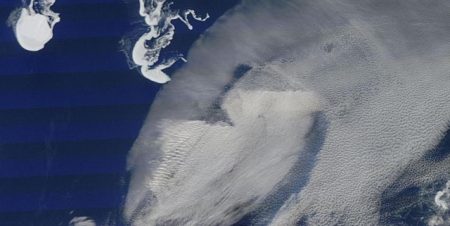 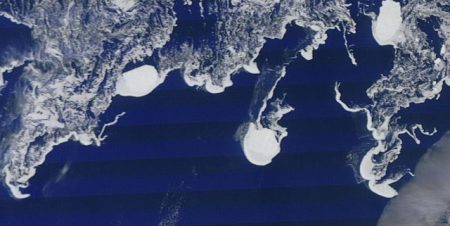 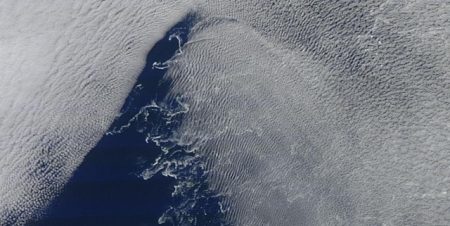 On the same day that the disturbing images above were taken, the power structure controlled National Snow And Ice Data Center (NSIDC) confidently made the statement below.

"Ice extent" is very different from the ice mass (volume), which is at record shattering low levels as the latest satellite imagery below clearly shows.

The graph between the two images is a gauge for Arctic ice thickness in meters. As the 2015 imagery shows, the thick multi-year Arctic ice is almost gone. Is the surface of the Arctic ocean being chemically ice nucleated with the same process that has created the unprecedented "ice boulders" on Lake Michigan in recent years? Even when water temperatures were far above freezing? 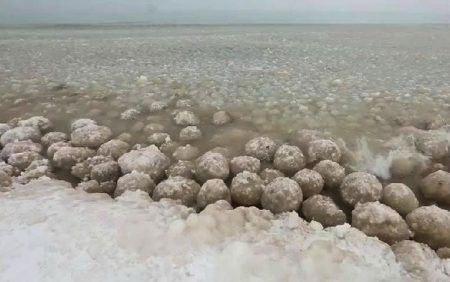 The following questions should be considered:

How can a very thin layer of sea surface ice statistically remain over large areas of ocean when such astonishing decreases in ice volume (mass) occurring at the exact same time? How can the ice "extent" statistically increase in early September (ahead of the normal "minimum" melt date) when we have record shattering global ocean temperatures? When we have just logged the hottest 12 month period globally, the hottest start to any year ever, the warmest summer ever, and the warmest August ever? And finally, when we consider that the Arctic is warming twice as fast as the rest of the world? What is really going on in the Arctic? Is there a connection between what the climate engineers are doing in the Arctic and the recent untimely deaths of three scientists that were investigating Arctic sea ice? How far will power structures go to hide climate engineering operations from populations? 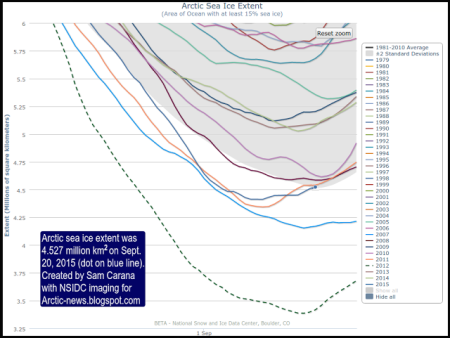 Though the ice extent (surface area) for 2015 was in an alarmingly downward trajectory as rapid melting took its toll, it suddenly turns statistically upward during the same window of time when the anomalous photos (shown earlier in this article) were taken. The power structure and the geoengineers do not want any headlines from the Arctic that would reveal the true extent of damage already done to the planet. They do not want any headlines that would potentially expose the climate engineering crimes that have been going on for well over a half century. Those in power will do everything they can to hide reality (from a population that is so far all too willing to stay uninformed) until the last possible moment. Climate engineering can create large scale temporary cooling, but at the cost of an even worse overall planetary warming. What is really going on in the Arctic? We must all examine the evidence and decide for ourselves. Geoengineering is not about the common good, it is about power and control at any price to the planet and the population. We must all do our part to expose and halt the climate engineering insanity.
DW

79 Responses to What Are The Climate Engineers Doing In The Arctic? Astounding Images, And Dead Scientists