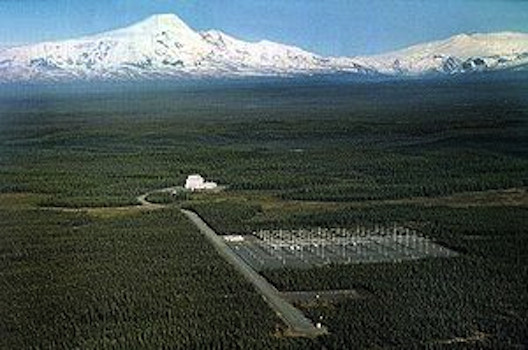 H.A.A.R.P., the High Frequency Active Auroral Research Program, is a geophysical weapon so powerful, it is a weapon of mass destruction.

H.A.A.R.P. is only one among many such installations across the globe’s “superDARN Highway,” an array of High Frequency (HF) radars now covering most of the northern and southern hemispheres.

This weapon has been a “secret” due to “national security.”

Though denied by HAARP officials, respected researchers such as Dr. Nick Begich allege that H.A.A.R.P.’s secret electromagnetic warfare capabilities “are designed to forward the US military’s stated goal of achieving full-spectrum dominance by the year 2020.”

Not only high-level government crime and conspiracy investigators are concerned about HAARP.

The European Union called the HAARP project a global concern and passed a resolution calling for more information on its health and environmental risks.

Despite EU’s concerns, officials at HAARP insist that the project is nothing more sinister than a radio science research facility.

The EU’s revealing document further states that it regrets the repeated refusal of the U.S. government to send anyone to give evidence on HAARP.

H.A.A.R.P. geophysical technology is based on manipulating processes that occur in the earth’s crust and its liquid and gaseous mantle, for military purposes.

“An atmospheric layer lying at an altitude of 10 to 60 kilometers is of special importance for this kind of warfare,” writes Nezavisimaya Gazeta in the article, ‘Invisible Wars’ of the Future E-bombs,Laser guns, and Acoustic Weapons on Global Research, July 6, 2007.

That article was originally published in Russian in Nezavisimaya Gazeta and translated by Guerman Grachev for Pravda.ru.

Other nations are also using this technology for acts of terrorism, as the U.S. can, according to Begich, author of five books and is recognized as the world authority on H.A.A.R.P.

Dr. Begich stated in his book, Angels Don’t Play This HAARP, that according to HAARP records, “when the device is built to full power it can send VLF and ELF waves using many wave forms at energy levels sufficient to affect entire populations.”

During a 1998 World Foundation for Natural Sciences conference in Interlaken Switzerland, Dr. Begich reported what he then viewed as “the most shockingly revealing document” about electromagnetic technology, one by the Scientific Advisory Board of the Air Force. That document included the statement:

“One can envision the development of electromagnetic energy sources, the output of which can be pulsed, shaped, and focused, that can couple with the human body in a fashion that will allow one to prevent voluntary muscular movements, control emotions [and thus behavior], produce sleep, transmit suggestions, interfere with both short-term and long-term memory, produce an experience set, and delete an experience set.”

During an October 2006 “End the Silent Holocaust” teleconference initiated by the writer, Dr. Begich reported that “psychotronics, including mind-control technology, are now operational worldwide.”

The following are excerpts from Dr. Begich’s book, “Angel’s Don’t Play This HAARP”:

“Dr Jose M. R. Delgado, M.D., has researched the human brain and published his results in professional papers since 1952. …. He found than by inducing electrical current in the brain of his subject, he could manipulate behaviour. Delgado discovered that he could create a number of effects from sleep to highly agitated states of consciousness. His later work was done wirelessly, with his most advanced efforts developed without electrode implants used at all. ….

“…John Heckscher, HAARP program manager, made clear in an interview that the frequencies and energies used in HAARP were controllable and in some applications would be pulsed in the 1-20 hertz range. ….

“…The HAARP system creates a huge coherent controllable electromagnetic field which could be compared to a Delgado EMF, except HAARP’S field doesn’t fill a room, it potentially fills a region the size of a large western state and possibly, a hemisphere. Basically, the HAARP transmitter in this application will emit energy of the same level of the Earth’s, which is fifty times more than what was needed in the wireless experiments of Delgado. What this means is that if HAARP is tuned to the right frequency, using just the right wave forms, mental disruption throughout a region could occur intentionally or as a side effect of the transmissions.”

Additional HAARP applications described by Begich include significant effects on living cells, causing chemical reactions and physiological responses. This concept has been explored by the US Naval Medical Research Center that found resonant frequencies could enhance biological effects of naturally occurring chemicals, thereby creating the same reaction as if a drug had been administered.

Military application of this technology would be to administer a tiny amount of a toxic substance on the battlefield, the entire planet in the “war on terror,” and then enhance its effect with resonant frequencies. This technique is clearly described in US Air Force documents, but not disclosed in any of the documents associated with the HAARP project, according to Begich.

Many researchers believe that the toxic substances being sprayed onto communities around the globe in the form of what is called chemtrails are the conduit for HAARP to become fully effective.

This same technology can be used to heal diseases or create them according to Dr. Begich. Delgado conducted experiments to heal bone fractures, induce genetic deformations, and alter the immune system. These effects can be achieved with very small amounts of controlled power.

Dr. Begich’s father was U.S. Congressman Nick Begich Sr. who disappeared with Louisiana Congressman Hale Boggs on a flight from Anchorage to Juneau in 1972.

Hale Boggs was one of the first members of the Warren Commission (J.F.K) to question the Lone Gunman theory. Boggs also had strong feelings about the FBI activities of blackmailing congress, wire-tapping, threats and other rogue behaviors.

In April 1971, Boggs made a speech on the House floor, strongly attacking FBI Director J. Edgar Hoover and the whole FBI. This led to a conversation on April 6, 1971 between then-President Richard M. Nixon and Republican minority leader, Gerald R. Ford, Jr., in which Nixon said that he could no longer take counsel from Boggs as a senior member of Congress.

In a recording, Nixon, known as Tricky Dick Nixon for his close ties to the FBI’s Cointelpro tricks, is heard asking Ford to arrange for the House delegation to include an alternative to Boggs. Ford said that he speculated Boggs was multi-drugging, on pills and alcohol.

50 years to refine the technology

Colleague Fred Burks of Want To Know writes, “If the military secretly developed a weapon which could cause a tsunami over half a century ago, what kind of advanced deadly weapons might be available now?

“And why is it that the general public still doesn’t know about secret weapons developed over 50 years ago?

“Clearly the military has the capability to cause a tsunami and likely to cause earthquakes and hurricanes, as well,” says Burks. “It’s time for us to take action to spread the word on this vital topic.”

5 Responses to What is HAARP?