When April is the New July: Siberia’s Epic Wildfires Come Far Too Early 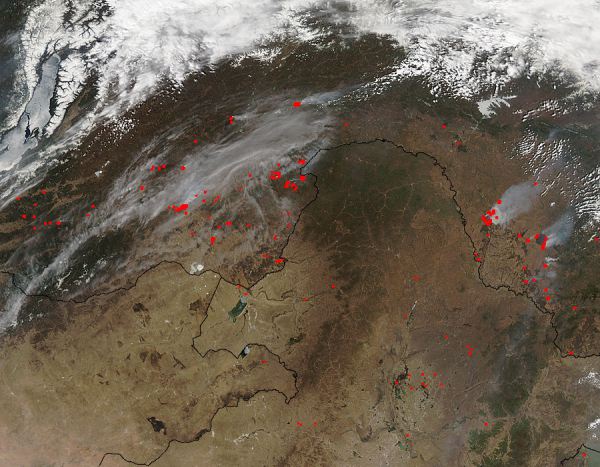 Image Above: NASA LANCE MODIS Rapid Fire hotspot analysis of extreme fire outbreak in the Amur region of Russia on April 28, 2014. In this shot, the Amur runs west to east through the frame. To the right is the Pacific Ocean [off frame] to the left is a corner of Russia’s massive Lake Baikal. The red spots indicate currently active fires. Image source: LANCE-MODIS

What we are currently witnessing is something that should never happen — an outbreak of fires with summer intensity during late April at a time when Siberia should still be frigid and frozen.

Last year, during late July and early August, a series of epic wildfires raged to the north and west of Russia’s far eastern Amur region. About a week later, the skies opened up in a ten-day-long deluge that pushed the Amur River bordering Russia and China to levels not seen in the entire 150 year span of record-keeping for the region. Whole cities were submerged as the Amur leapt its banks to form a kind of massive inland sea.

The floods promoted strong growth in the region, penetrating permafrost zones to enhance melt, providing major fuel sources for fires should they re-emerge. Come winter, a persistent warm ridge pattern in the Jet Stream transported hotter than usual air over this region. The winter was far, far warmer than it should have been. And when spring came, it came like the onset of summer.

Last week, temperatures soared into the 70s and ever since the beginning of April, freakishly large fires for so early in the burn season erupted. By April 23rd, the Russian fire ministry had logged nearly 3,000 fires. The outbreak was so intense that, just a few days ago, more than 5,000 pieces of heavy equipment and an army of firefighters were engaged throughout a large stretch of Russia from the still frozen shores of Lake Baikal to the far eastern Amur region.

(Two massive wildfires in excess of 200 square miles burning in the Amur region of Russia on April 28, 2014. Image source: LANCE-MODIS.)

Even during Russia’s recent global warming-spurred epic fire seasons of 2010 to 2013 fires of this scope and obvious visible intensity didn’t come up in the satellite imagery until the most intense periods of summer heating during late June through early August. Today, we have monster fires comparable to those which burned during Russia’s worst ever recorded fire seasons, at their height, burning next to snow covered regions in late April.

As a last reference, look at the snow covered mountainous ridge in the far lower right corner of the above image. That swatch of crystalline white — yes, it’s a ridge of snow-covered mountains apparently being dwarfed by the massive fire burning just above it. Beneath this mountain range is what appears to be a ‘small’ plume of smoke. It’s worth noting that this smoke plume issues from a recently burned region covering fully 15 square miles. By comparison, the fires above each cover areas comparable to Guam, half of Rhode Island, or the massive ice island recently broken off from the now doomed Pine Island Glacier (PIG) — B31.

Unfortunately, these massive fires aren’t the only blazes covering extraordinary swaths of Russian land during late April. Moving west to the shores of the still partly frozen Lake Baikal, we find numerous fires burning beneath a sea of smoke in the lowlands between two, still snow-capped highlands.

The entire roughly 200 x 200 mile (40,000 square mile) region is covered by the steely gray smoke of previous and ongoing blazes.  Peering down through the dense shroud, we see numerous thick smoke plumes issuing from still out of control fires. The freakish prematurity of these blazes is readily apparent in the visible ice still covering much of Lake Baikal and also in the snow still doggedly clinging to the nearby mountainous highlands.

A vicious combination of thawing permafrost, a rapid increase in average temperatures throughout Siberia and driven by human warming, and the vulnerability of the active soil layer and related vegetation to rapid drying appears to be turning this region into an ever more explosive fire trap. Risk of wildfire is dependent on both heat and fuel. But with the permafrost containing an almost inexhaustible layer of either drying peat or venting methane and with temperatures now rising at twice the already rapid global rate, the potential for burning in or near the violatile permafrost thaw zone may well be practically unlimited.

These extraordinary and anomalous conditions, combined with a very intense early season warming, what appears to be a persistent and developing heat dome over Eastern Russia and adjacent Arctic Siberia, a very rapidly receding snow line, and, potentially, an amplifying effect from an emerging El Nino in the Pacific, results in a very high continued risk for both extreme and record fires throughout the spring and summer of 2014.