Where Have All The Blue Skies Gone 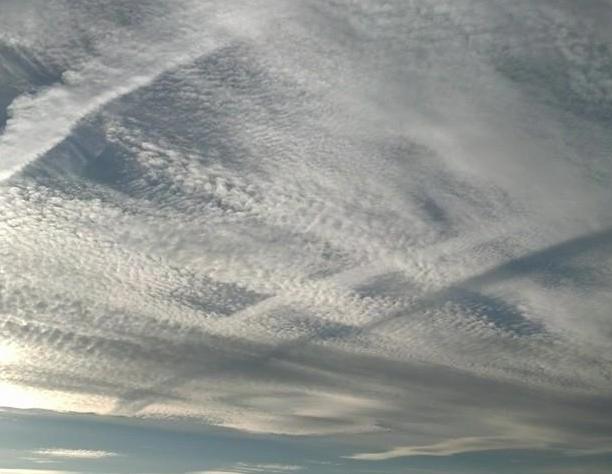 I think that we have all noticed that our temperatures outside have been in a flux. One day it is above normal and the next day below normal, not only in New England but across the Globe. Something is definitely happening to our weather and climate. Doing some research, I have discovered that the US Air Force wants to control the weather by 2025. It is documented.

If you LOOK UP at the sky, you will notice that the sky is not blue for very long, even on a blue sky day. Instead, you will often see streaks of white plumes in the sky from planes, sometimes in patterns of a criss-cross or straight line or tick, tack, toe. These plumes after awhile begin to widen and blanket the blue sky turning it into a milky white. It has been verified with air, water and soil samples; by climate engineering patents, and videos that these streaks are aerosol trails of toxic chemicals of barium, strontium, aluminum oxide and other synthetic fibres being sprayed daily into the stratosphere by military and some commercial planes. A reason for the spraying of our skies on a global basis according to David Keith of Harvard, who recently spoke on the Colbert Report Show, is to cool down the temperature of the Earth. The name given to this process is Global Climate Engineering (Intervention) or Weather Modification, also known as Solar Radiation Management (SRM).

As much as the climate engineers are trying to cool the Earth, Weather modification is wrecking our eco-system and hydrological system already set in place. Television documentaries have reported that 200 species are becoming extinct each day, as well as fish, birds and animals. Dane Wigington in a documentary has mentioned that plants, trees and bees are dying in California. Other authors have pointed out to us, that our ozone layer is being depleted; the sunlight is dimming; farms and gardens are producing less crops; aquifers are depleting; states and countries are experiencing droughts. Many of our friends or relatives and ourselves have seen an increase in floods; ice tsunamis; earthquakes; hail; hurricanes and tornadoes. We are nearly at the edge of the tipping point! Time is running out is becoming a familiar mantra!

Besides the spraying of these toxic chemicals, our weather is also being manipulated by HAARP (High Frequency Active Auroral Research Project). Both Nick Begich and Rosalie Bertell have written about this project in their books, and they can be heard on utubes online. Rosalie Bertell tells us that HAARP began in 1990 and work on the ionosphere facility in Gakona, Alaska began in 1993. HAARP is known as Tesla-based technology.

HAARP has ionosphere heaters that can heat sections of the Ionosphere to form a curved lens and also reflect massive energy beams back to Earth to trigger hurricanes, floods, droughts and earthquakes, as well as diverting them away from certain cities, states and or countries. It is known to have 24 heaters around the globe.

Such powerful technology to be in the hands of humans, without the complete knowledge of possible consequences of their usage and the moral authority to decide who has good weather today or not, or droughts for months on end! Is this not playing God with our weather and climate? Such hubris!

According to Professor James Fleming of Colby College in Maine, we are not the first generation to think about modifying and manipulating the weather and to change the climate. He tells us that as far back as 1841, James Espy tried to modify the weather. He tried to make artificial rain by burning forests. Other attempts to control the weather took place in the 1900’s beginning in 1904 with Charles Hatfield known as the Rainmaker who attempted to make it rain in California. Also again in 1915 when he supposedly caused it to rain for 17 days in San Diego by building a 20-30 foot tower which he climbed and then mixed chemicals claiming that by letting them evaporate in the atmosphere, he would attract rain clouds to open. Rain clouds did open resulting in deaths and the destruction of 100 bridges and people left homeless. As a result of the devastation, Mr. Hatfield was never paid the sum he bargained for. If you read, James Fleming’s work on FIXING THE SKY, you will find other examples showing that all throughout the 1900’s other various attempts were made to control the weather and climate not only by the United States but also by Russia.

So what is all this technological know how good for, if it is being used to destroy, rather than to promote responsible stewardship of the Earth? California, at present is in a terrible drought.
Where is HAARP in all of this? Why isn’t HAARP helping to bring moisture and rainfall to California, instead of the opposite?

As I reflect by my window and see trails of chemicals being released in our sky, day after day knowing that this will affect and effect our weather and our health, I can only ask what about the ETHICAL IMPLICATIONS of managing the world’s climate? Have policy makers taken this into account? Who will set the temperature for the Earth? What about the health issues of the citizens onto which the toxic chemicals mentioned above, fall day in and day out? Who are the policy makers accountable to for the consequences of Weather Modification? Alzheimers and autism are becoming rampant, as well as cancer and respiratory ailments. Are they not the results of these toxic chemicals?

Having this technology also raises the question about causing rain in one place that could risk causing drought in another place. Scriptures tell us that we are all one. So when one place is affected all is affected. Although I live at the opposite coast from California, I feel for the citizens there experiencing drought and devastation, also for the folks in Buffalo, New York, who recently experienced an unprecedented epic snowstorm. This brings to mind the words of Chief Seattle: “Whatever befalls the Earth, befalls the sons and daughters of the Earth.”

Scientists tell us that time is running out and that the only way to fix the weather and the climate is to leave the sky alone and instead reduce CO2 emissions and also Methane Emissions. May we all have the courage to do so! INSTEAD OF AN ICE BUCKET CHALLENGE, I challenge all who will read this to write or call President Obama and your legislators to encourage them to reduce CO2 Emissions and Methane Emissions, while leaving the sky alone.

Fix The Sky by James Fleming

One Response to Where Have All The Blue Skies Gone