Where The Apocalypse Came Early 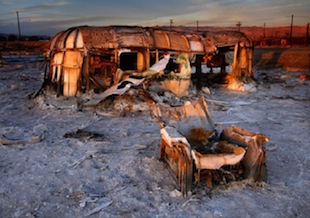 Water is the foundation of all life on Earth. Global climate engineering has completely disrupted the hydrological cycle on our planet. Though the human race has inflicted immense and incalculable damage to the biosphere as a whole, the planet would have been able to respond much more effectively to this damage if not for the all out geoengineering assault against it. The 6 minute video below is  sobering and should be carefully considered. The whole of global civilization is on the fast track to become like the region this film portrays. I have been to the place highlighted in this video as a boy, I saw it as it was. Now I see it as it is, a metaphor for what is to come. The illusion of industrialized society as a permanent paradigm will soon be shattered. Take note of the skies in this short film, you will clearly see the telltale signs of the ongoing climate engineering insanity. Geoengineering is the greatest assault against life on Earth ever launched by the human race. Global rainfall patterns have been completely disrupted and the entire planet has now been contaminated by the geoengineers. The ozone layer has also been decimated. The most critically important accomplishment we could make at this late hour is to expose and halt climate engineering so that the Earth can respond on her own to the decimation of the human race. Make your voice heard in this desperate battle.
Dane Wigington
geoengineeringwatch.org

8 Responses to Where The Apocalypse Came Early