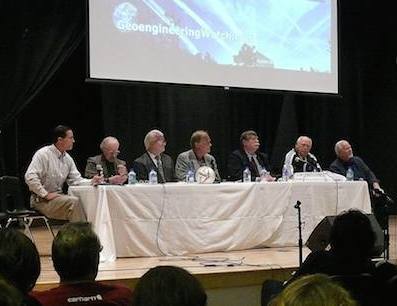 Share3.1K
Tweet
+1
Share
Pin22
3.1K Shares
On November 21st, 2014, a diverse panel of experts was assembled in Northern California to discuss the profound environmental and human health dangers posed by the ongoing global climate engineering programs. Northern California media completely blacklisted this important event and gave it no coverage whatsoever even though they were notified in advance. There were nearly 500 concerned citizens in attendance from locations throughout the state, and from locations as far away as Alaska. Some of those present in the audience also included city officials, county officials, and other public agency personnel. Why did mainstream media totally ignore this major gathering which presented hard science data on the dire issue of climate engineering? Because corporate media's job is to block credible data from reaching the public. All are needed to help sound the alarm on the lethal geoenginering programs. Mainstream media will not help us in this critical battle, it's up to us.
Dane Wigington
geoengineeringwatch.org

84 Responses to Geoengineering Dangers Discussed By Officials, Agency Scientists And Other Experts