Killing The Oceans, The Dumping Of Nuclear Waste 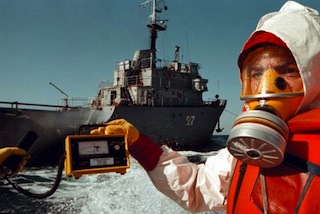 I have been fighting to expose the spraying of our skies for 12 solid years. During this period I could never recount how many times I have had people tell me "those in power would never spray the skies with toxic materials, they would never do this to themselves. They need to live on this planet also." The assumption that those in power would not willfully destroy the environment on which their lives also depend is absolutely false.

"They would not do this to themselves" is the excuse many use to remain in their comfort zone of total denial while the walls close in around us all. If the oceans die, we die. Our oceans are being irreparably poisoned from above and below. The geoengineers are poisoning the surface of the seas with ocean iron fertilization. The military industrial complex of insanity are permanently poisoning the oceans from the bottom up as well. As if Fukushima was not bad enough with its rapidly worsening dangers, the US military has routinely used radioactive ammunition for practice around the globe including off the US west coast. The radioactive and chemical munitions that the military chooses to abandon, they simply dump in the sea.

On top of all this, the power structure has been dumping nuclear waste in the world's oceans for many decades. The documentary below is exceptional and well worth the time view. It exposes the lethal and rapid poisoning of seas around the globe by the willful and illegal dumping of nuclear waste, a routine practice of the military industrial complex. No matter how painful it is to face such realities and learn about them, we must face these truths if we are to have any chance of ever changing them. DW

20 Responses to Killing The Oceans, The Dumping Of Nuclear Waste