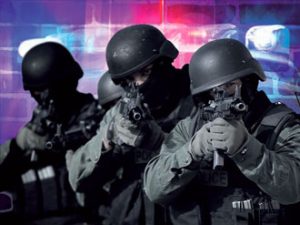 “The most dangerous man, to any government, is the man who is able to think things out for himself…Almost inevitably, he comes to the conclusion that the government he lives under is dishonest, insane, and intolerable.”—H.L. Mencken, American journalist.

It’s vogue, trendy and appropriate to look to dystopian literature as a harbinger of what we’re experiencing at the hands of the government. Certainly, George Orwell’s 1984 and Animal Farm have much to say about government tyranny, corruption, and control, as does Aldous Huxley’s Brave New World and Philip K. Dick’s Minority Report. Yet there are also older, simpler, more timeless stories—folk tales and fairy tales—that speak just as powerfully to the follies and foibles in our nature as citizens and rulers alike that give rise to tyrants and dictatorships.

One such tale, Hans Christian Andersen’s fable of the Emperor’s New Clothes, is a perfect paradigm of life today in the fiefdom that is the American police state, only instead of an imperial president spending money wantonly on lavish vacations, entertainment, and questionable government programs aimed at amassing greater power, Andersen presents us with a vain and thoughtless emperor, concerned only with satisfying his own needs at the expense of his people, even when it means taxing them unmercifully, bankrupting his kingdom, and harshly punishing his people for daring to challenge his edicts.

For those unfamiliar with the tale, the Emperor, a vain peacock of a man, is conned into buying a prohibitively expensive suit of clothes that is supposedly visible only to those who are smart, competent and well-suited to their positions. Surrounded by yes men, professional flatterers and career politicians who fawn, simper and genuflect, the Emperor—arrogant, pompous and oblivious to his nudity—prances through the town in his new suit of clothes until a child dares to voice what everyone else has been thinking but too afraid to say lest they be thought stupid or incompetent: “He isn’t wearing anything at all!”

Much like the people of the Emperor’s kingdom, we, too, have been conned into believing that if we say what we fear, if we dare to suggest that something is indeed “rotten in the state of Denmark,” we will be branded idiots and fools by the bureaucrats, corporate heads, governmental elites and media hotshots who have a vested interest in maintaining the status quo—or who at least are determined to maintain the façade that is the status quo. Yet the truth is staring us in the face just as surely as the fact that the Emperor was wearing no clothes.

Truth #1: The U.S. is on the brink of bankruptcy, as many economists have been warning for some time now, with more than $16 trillion in debts owned by foreign nationals and corporations. As one financial news site reports: “Internationally, the world is fed up with The Fed and the U.S. government’s unabashed debt growth. China, Russia, Iran, India and a host of other countries are establishing trade relationships that are bypassing the U.S. dollar altogether, a move that will soon see the world’s reserve currency lose purchasing power and status. In anticipation of this imminent collapse gold is being hoarded by private and public entities from Berlin to Beijing in an effort to preserve wealth before the Tsunami hits.”

Truth #2: We no longer have a government that is “of the people, for the people and by the people.” What we have now is a feudal monarchy, run by wealthy overlords and financed with the blood, sweat and labor of the underclasses who are kept in check by the increasingly militarized police. This sorry state of affairs is reinforced by a study which found that average citizens have “little or no independent influence” on the policy-making process. A similar study published by thePolitical Research Quarterly revealed that members of the U.S. Senate represent their wealthiest constituents while ignoring those on the bottom rung of the economic ladder.

Truth #3: Far from being a benevolent entity concerned with the well-being of its citizens, whether in matters of health, safety or security, the government is concerned with three things only: power, control and money. As an often quoted adage says, “Government is not reason; it is not eloquent; it is force. Like fire, it is a dangerous servant and a fearful master.” Unfortunately, the master-servant relationship that once had the government answering to “we the people” has been reversed. Government agents now act as if they are the masters and we are the servants. Nowhere is this more evident than in the transformation of police officers from benevolent keepers of the peace to inflexible extensions of the military hyped up on the power of their badge.

Truth #4: Our primary use to the government is as consumers, worker bees and bits of data to be collected, catalogued, controlled, mined for information, and sold to the highest bidder. Working in cahoots with corporations, the government has given itself carte blanche access to our phone calls, emails, bank transactions, physical movements, even our travels on foot or in our cars. Cybersecurity expert Richard Clarke envisions a future where data about every aspect of our lives will be collected and analyzed. Thus, no matter what the U.S. Supreme Court might have said to the contrary, the government no longer needs a warrant to spy on your cell phone activity or anything else for that matter. As theWashington Post recently revealed, 9 out of 10 people caught up in the NSA’s surveillance net had done nothing wrong to justify such intrusions on their privacy. Clearly, the government now operates relatively autonomously, answering only to itself and unbridled by the courts, Congress, the will of the people or the Constitution.

Truth #5: Whatever problems we are grappling with in regards to illegal immigrants flooding over the borders has little to do with the fact that the borders are porous and everything to do with the government’s own questionable agenda. How is it that a government capable of locking down roads, open seas, and air routes is unable to prevent tens of thousands of women and children from crossing into the U.S. illegally? Conveniently, the Obama administration is asking Congress for $3.8 billion in emergency funding to send more immigration judges to the southern border, build additional detention facilities and add border patrol agents. The funds would be managed by the Departments of Justice, Homeland Security, State and Health and Human Services, the very same agencies responsible for bringing about a rapid shift into a police state.

Truth #6: The U.S. government is preparing for massive domestic unrest, arising most likely from an economic meltdown. The government has repeatedly made clear its intentions, through its U.S. Army War College report alerting the military to prepare for a “violent, strategic dislocation inside the United States,” through its ongoing military drills in cities across the country, through its profiling of potential homegrown “dissidents” or extremists, and through the proliferation of detention centers being built across the country.

Truth #7: As Gerald Ford warned, “A government big enough to give you everything you want is a government big enough to take from you everything you have.” Too often, Americans have fallen prey to the temptation to let the government take care of whatever ails them, whether it be financial concerns, health needs, childcare. As a result, we now find ourselves caught in a Catch-22 situation wherein the government’s so-called solutions to our problems have led to even graver problems. In this way, zero tolerance policies intended to outlaw drugs and weapons in schools result in young children being arrested and kicked out of school for childish behavior such as drawing pictures of soldiers and crying too much; truancy laws intended to keep students in school have resulted in parents being arrested and fined excessively; and zoning laws intended to protect homeowners have been used to prosecute residents who attempt to live off the grid.

Truth #8: The U.S. is following the Nazi blueprint to a “t,” whether through its storm trooper-like police in the form of heavily armed government agents, to its erection of an electronic concentration camp that not only threatens to engulf America but the rest of the world as well via NSA surveillance programs such as Five Eyes. Most damning of all is the Department of Homeland Security’s self-appointed role as a national police force, a.k.a. standing army, the fundamental and final building block for every totalitarian regime that has ever wreaked havoc on humanity. Indeed, just about every nefarious deed, tactic or thuggish policy advanced by the government today can be traced back to the DHS, its police state mindset, and the billions of dollars it distributes to police agencies in the form of grants.

Truth #9: Not only does the U.S. government perpetrate organized, systematic violence on its own citizens, especially those who challenge its authority nonviolently, in the form of SWAT team raids, militarized police, and roaming VIPR checkpoints, but it gets away with these clear violations of the Fourth Amendment because the courts grant them immunity from wrongdoing. Expanding its reach, the U.S. also exports its violence wholesale to other countries through armaments sales and the use of its military as a global police force. Yet no matter how well trained, well equipped and well financed, America cannot police the world. As history shows, military empires, once over extended, inevitably collapse into chaos.

Truth #10: As I make clear in my book A Government of Wolves: The Emerging American Police State, the United States of America has become the new battlefield. In fact, the only real war being fought by the U.S. government today is the war on the American people, and it is being waged with deadly weapons, militarized police, surveillance technology, laws that criminalize otherwise lawful behavior, private prisons that operate on quota systems, and government officials who are no longer accountable to the rule of law.

So there you have it: facts rather than fiction, so naked that a child could call it for what it is, and yet so politically inconvenient, incorrect and uncomfortable that few dare to speak of them.

Even so, despite the fact that no one wants to be labeled dimwitted, or conspiratorial, or a right wing nut job, most Americans, if they were truly paying attention to what’s been going on in this country over the past few decades and willing to be truthful, at least to themselves, would have to admit that the outlook is decidedly grim. Indeed, unless something changes drastically for the good in the near future, it looks like this fairytale will not have a happy ending.

Constitutional attorney and author John W. Whitehead is founder and president of The Rutherford Institute where this article first appeared. He is the author of A Government of Wolves: The Emerging American Police State and The Change Manifesto.

5 Responses to 10 Naked Truths About the American Police State