Chattanooga Media Sounds the Alarm on our Toxic Skies 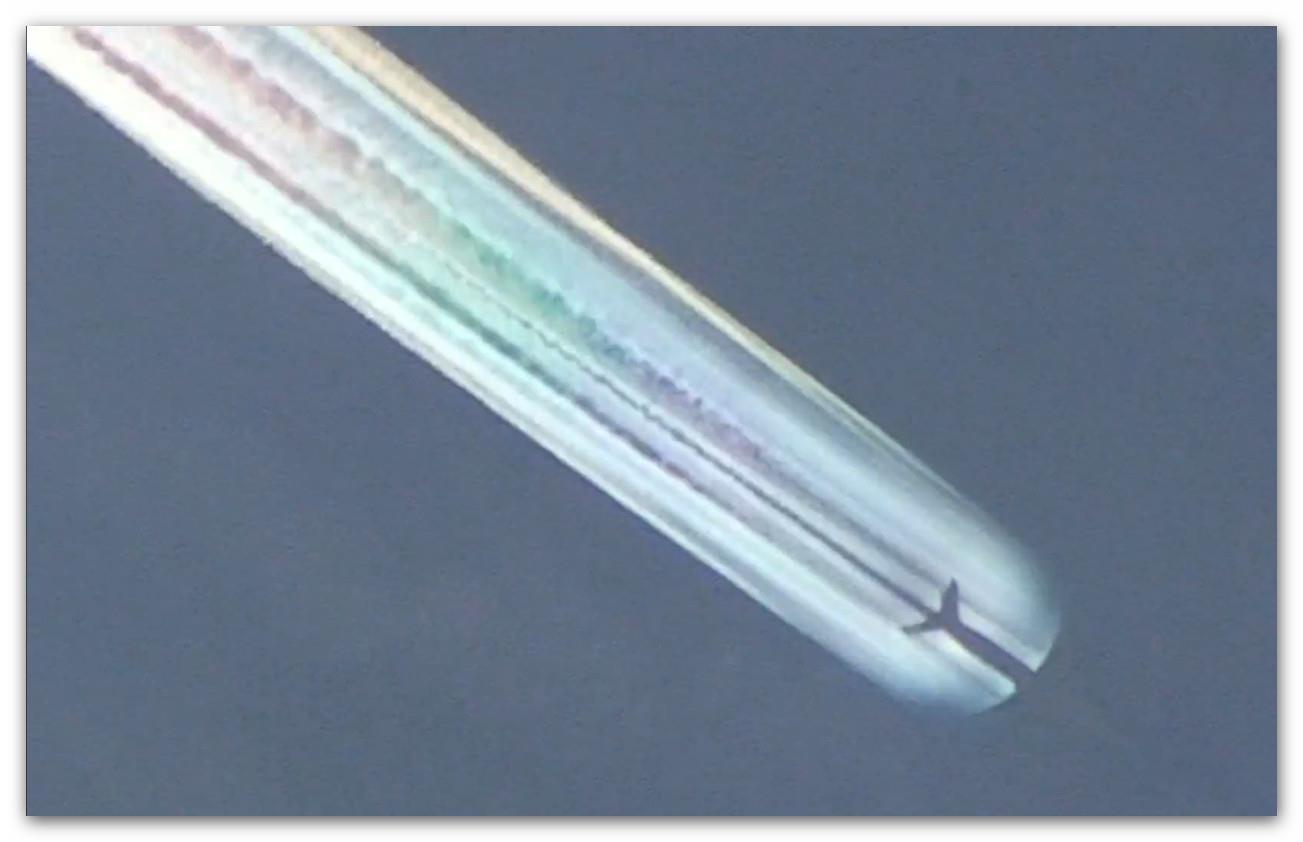 Credible media sources and people are increasingly speaking out about the all too obvious crimes occurring in our skies day in and day out. The undercurrent of awareness in regard to the climate engineering insanity is growing by the day. My most sincere gratitude to David Tulis of Hot News Talk Radio for his exceptional writing in the article below. As respected members of media from all over the globe increasingly address the critical issue of the covert climate engineering programs, soon enough the criminal spraying of our skies will be fully exposed and recognized by the public. Once this happens, the dominos will begin to fall. Populations will be furious when they finally realize they have all been sprayed like lab rats without their knowledge or consent.
Dane Wigington
geoengineeringwatch.org

Uncle Sky Stripes City On National Holiday; Should We Worry, Or Say Thanks? – And Response (5) 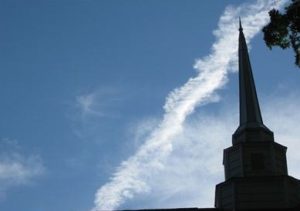 Americans celebrate their country’s patriotic day looking up to exploding fireworks in the night sky. On Thursday thousands of souls in folding chairs and with snacks in hand crowded a downtown Chattanooga park to hear a symphony and to watch the shaking and streaming pyrotechnics over the Tennessee River.

On Friday, the hallowed Fourth of July, the skies over Chattanooga are filled with another symbol of extravagant might and bold report. But a symbol one scarcely bothers to crane one’s neck to observe. Sky striping. Sky tattooing. The dragging across the blue a stitchwork of white streamer that turns into exuberant agonies of cirrus-like cloud.

Nature under siege
Sky striping is not a mere incidental to our age of iPhones, electric autos, Tennessee Valley Authorities, environmental whoopings and jet travel. Sky emissions are vital to the so-called “war on global warming.” Sky striping is an official pollution intended, supposedly, never to filter down to Coolidge park or the sidewalk in front of city hall. The haze of nanoparticulate aluminum and other goodies is intended to stay aloft permanently, though coarser particles and the hazards of nature bring the dust to our nostrils, for better or worse.

Yes, the debate over global warming is heated and confusing. It is a theory that pits two parts of God’s creation against each other — the earth vs. the sun. The earth is at fault — nature itself is inadequate to deal with the sun. Mankind, by government power worldwide, is courageously intervening.

The fix is on and operates entirely outside a laggardly scientific literature about stratospheric aerosol geoengineering. Academia assumes absolutely nothing has been done to armor up the higher atmosphere and make sunlight ricochet back into outer space. As practiced today, chemtrailing is an untested protocol under U.S. patents but lacking peer-reviewed study.
Uncle Sam’s marketing of “enmod” (environmental modification) works on two fronts. On one hand it proposes reducing pollution from factories, farms and autos which it claims add to global warming. The EPA on June 3 declared the U.S. will cut carbon emissions from utilities by 30 percent by 2030, enough to “prevent up to 150,000 asthma attacks in children and as many as 3,300 heart attacks by 2030,” Reuters says.

Separately and entirely beyond notice of Reuters and the Wall Street Journal is SAG, the nation-state’s official aluminum particulate spraying effort — a cloud-making program paid for on the digital charge card — to affect what policy wonks call solar radiation management.

Of course you are not surprised. Uncle Sam manages all kinds of things. Light bulb wattage, toilet water hoppers, auto manufacturing, bank loans for the poor, genetic material for biowar viruses. Perhaps its most magnificent claim to power has been upon the weather. The scenario of sky seeding for Uncle’s military interests is outlined in “Weather as a Force Multiplier: Owning the Weather in 2025,” a fanciful 52-page essay published in 1997.

From smoggy city to environmental city?

SRM is the weakening of the sun by artificial clouds such as those that tattoo the sky over Hamilton County, home to 345,500 souls, half of whom live in Chattanooga, once a smog pot but of late a mere haze pot. Since the 1950s,  places such as Southeast Tennessee have been hit by what British scientist Gerry Stanhill calls a “a staggering 22% drop in *** sunlight.” The causes are said to be “anthropogenic” — human activity.

But 22 percent may not be enough of a reduction, and so upper atmosphere aerosol deposits are being stepped up. Dates for the uptick of sky striping are unknown, but 2002 and 2010 suggest themselves. By my recollection, the sun has felt distinctly weak since summer 2013. Have you noticed what I’m talking about? Sunlight any more is mild, nonferocious, paltry. A neighbor, Doug Womble, a Soddy-Daisy logger and outdoorsy jack of all trades, says the sun lost its oomph three summers ago. That golden orb today, thanks to aerial munificence of Uncle Sam, is a sweatless wonder.

A day of spraying brings haze, a milky background against which even striking natural cloud formations from the hand of God in nature look pallid. Sometimes Chattanooga’s haze is tinged yellow, as if something were afire.

Another phenomenon in the city’s assembly line weather on July 4: The sun halo and the related chemical rainbow. In the Bible, Joseph’s coat of many colors tells of his father, Isaac’s, special favor of the boy; so, too, might “chembos” tell of the favor with which Uncle views his gauzy progeny drifting over the Tennessee River. Friday’s prism appeared at 7 p.m.

Beyond haze and halos, one more thing. Chemtrailing seems to make the air very dry, as if a desiccant has been sprinkled across the giant bowl embracing the city. Geoengineering by policy alters the planetary winds and hydrological cycles, acting as a drying agent, reports indicate. National news coverage Friday tells of the West Coast’s four-year drought and whether New Mexico counties would allow fireworks when ground “is so dry that the grass crunches under the hooves of horses and cattle.” Some gain, some sufer. A crosshatch of 300 jet trails over the Pacific coast causes a drought in the plains and a deluge in New York.

My patriotism stirs
It’s July 4. All across Chattanooga on the national birthday planes deposit white trails at 45,000 feet, a local private pilot tells me. One jet flies over my workplace in Hixson and lays a cloud that in two hours billows out into a real cloud. A man calls to say downtown is grandly criss-crossed.

At 5 p.m. I go with family to a church picnic in Brainerd. We eat inside and afterward horse around in the yard in such delights as three-legged races and egg tosses. A jet streams directly overhead and lays a white cloud that seems to drip cloudlets from the main stream, like a white cake batter on a plastic spoon handle.

Sky hacking is an enigma wrapped in a mystery. One part of government seems to know nothing about what another arm is doing. In Hamilton County, pollution watchdogs as policy disregard readings of aluminum, strontium and barium as mere traces, regularly in the air you breathe. Schizophrenia marks a National Oceanic and Atmospheric Administration report that strongly suggests chemtrail results but leads readers into a conceptual void. The paper says a “recent increase in the abundance of particles high in the atmosphere has offset about a third of the current climate warming influence of carbon dioxide (CO2) change during the past decade,” NOAA notes in an essay in Science (2011).

In the stratosphere, miles above Earth’s surface, small, airborne particles reflect sunlight back into space, which leads to a cooling influence at the ground. These particles are also called “aerosols,” and the new paper explores their recent climate effects — the reasons behind their increase remain the subject of ongoing research. *** The reasons for the 10-year increase in stratospheric aerosols are not fully understood and are the subject of ongoing research, says coauthor Ryan Neely ***.  [Italics mine]

Press reports and the scientific literature suggest the government operates in self-contradictory fashion, with an unknown agenda behind the official but secret program. Was the NOAA paper the best warning its anxious staff dared make?

Our options are limited

My exploration of  government intervention raises three questions. What do these trails mean for human health in one Southern city? Can we protect ourselves or undo damage already done to our health? Can we hold the good people in Washington to account?

— Chattanooga health prospects? Negative. Chatter magazine gives a two-page color spread showing the city’s haze from atop Lookout Mountain and ascribes the mist to pollen. You can do better than that. Heavy metals are associated with skyrocketing incidences of Alzheimer’s, ALS and autism, which could arise from human absorption of aluminum particles existing near the atomic scale. If we accept at least the possibility that Uncle is looking out for No. 1 and that geoengineering is old school, we will be able to focus on the program as a threat.

— Draw metals from your body? Yes. Contact your local supplements supplier to learn about oral chelation. Chelation is a therapy for the body to draw from it metals poisoning. My supplier tells me he has a mix of four supplements to undo neurological damage from metals. The cost is about $200 for a year’s treatment that lasts three months.
— Holding government to account? Can’t do it. Sky striping may pretend to save the planet by deflecting sunlight, but it also is causing planetary harms I overlook here. For us as victims, it is a mass tort, a public nuisance, a pollution imposed without tests or consent upon a population kept in the dark. Until a criminal category of aggravated battery by toxic chemical is developed (as suggested by Florida attorney Ralph Behr), we have weak legal remedies. One could petition for a civil order of abatement of a public nuisance. If the plaintiff is a minor, the case would be firmly in Hamilton County chancery court jurisdiction. The defendant would a U.S. agency operating over Hamilton County. But which organization? The U.S. Air Force? EPA? Suing the local pollution control board would be useless, as it denies any jurisdiction over aircraft.

The government’s defense? It’s unbreakable. Sky striping is in military jurisdiction, serving a compelling state interest. The public interest, remember, is not identical to state interest. The state has no alternative by which it can accomplish its public policy goals (and, perhaps, the goals of the deep state and its minders, parties whose role would never appear in public court). Sky hacking will go on.

Court of public opinion
What about publicity? Protests? What about public hearings such as that held June 26 in Kingman, Ariz.? Happily, public noise and political interference are growing worldwide. You should learn more by visiting the website of a leading greenie, Dane Wigington. The site is geoengineeringwatch.org. Activists should make a ruckus. Journalists should stop kow-towing to government and press a great story.

If nothing else, the existence of geo-engineering should make us despair entirely of the U.S. government, lead us to understand we look to it for no benefit or salvation of any kind, whether it’s an SBA loan or a college freebie. Its mix of malice and bad faith in geo-engineering seems inexhaustible, and we should studiously ignore the federal power’s every glory. Still, honorable people are on the front line of the program. They have taken criminally enforceable confidentiality oaths to not talk, but they are all well paid and will get treasury department direct deposits when they retire. Pilots, flight crews, mechanics, contract managers, supply chain overseers, airport tower operators — all have a stake in saving the planet, and so act in honor and good faith. These people cannot help us — except if one by a sense of fair play is driven to spring a leak.

I await revelations within the next two years from Edward Snowden about how SAG operates. Until then, let’s do what we can.