Chemtrails in the Air Causing Cancer and Other Illness 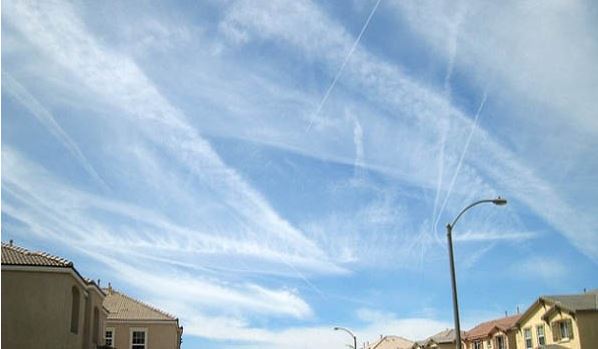 Although there are many causes cited for cancer, the idea of chemtrails from the air as a leading contributer to cancer, and other illnesses, has not been widely considered. Here’s a statement:

The International Agency for Research on Cancer (IARC) cited data indicating that in 2010, 223,000 deaths from lung cancer worldwide resulted from air pollution, and said there was also convincing evidence it increases the risk of bladder cancer.

In the data that follows this statement, there is no mention of chemtrails as a possible cause among the ones listed; what they claim as causes are industrial and agricultural emissions and even home heating and cooking.

But, how could it not name chemtrails, even as a possibility needing further research? They’re awfully visible in the sky. Even though they can be mistaken for airplane exhaust trails, they’re not. Emissions from planes, called contrails, disappear quickly while chemtrails are thick and persistent. They also get wider as they linger in the air.

What is the purpose of these sprays? What possible justification could there for such frightening injections into the environment of dangerous toxic chemicals?

The reasons given by the government for the need for chemtrails are to control the weather and  for global warming. How does that stack up against getting sick with cancer, Alzheimer’s, etc?

Edward Snowden, the whistleblower on the NSA, has revealed some details. Chemtrails began in the 1960s as a major part of a secret lab called Muad’Dib with Monsanto very much involved.

He said the chemtrails were not difficult to hide because they were disguised in commercial aircrafts as additives and that the chemicals released are very dangerous, even in minute quantities. He further says, The most dangerous thing is that although chemtrails are keeping the climate of the U.S. reasonably stable, citizens are bombarded every day with an invisible rain of carbon-laden molecules, and the effect on health is totally unknown.

The Environmental Defense Fund, The Royal Society and the Third World Academy of Sciences further promoted chemtrails, calling it Solar Radiation Management. They discuss an incident which occurred in 1988 as a result of weather control – a high pressure system stalled, winds circled and pushed air south over the Midwest. What resulted was a drought and heat wave which …cost $40 billion in damages and 5,000 to 10,000 deaths.

They admit they don’t know what the side effects would be of climate control, involving chemtrails, physically as well as socio-politically.

Dr. Russell Blaylock, extensive researcher and author, says the aluminum and barium in chemtrails effects the brain and have dire consequences from falling into the soil and water, causing cancer and other illnesses.

Barium stops the flow of T-cells, whose function is to destroy cancer cells. Basically, chemtrails help to destroy the immune system, making it much easier to contract cancer whose rates have soared along with the increase of chemtrails.

Dr. Whitaker, Board Certified Naturopathic doctor, urges everyone to avoid mainstream, processed food products at all costs, eat non-GMO foods and detox your liver at least once a month. Part of that toxicity comes from the polluted air we breathe from chemtrails.

Buying organic food is definitely very necessary and no longer really a luxury – it is vital to our very survival. However, food cannot be officially labeled organic if they are contaminated with air-borne toxins coming from chemtrails.

One solution is to grow food in your backyard or even on a balcony and cover it, making a greenhouse. Then you can have totally healthy, uncontaminated, organic food which also tastes much better too.

These solutions are great and much needed, even without chemtrails, but for now they are more of a stop-gap. The real answer is to eliminate the insanity of trying to control the weather with killer chemicals when we might not have anyone left to benefit from it. It’s like – the operation was a success but the patient died?

There may or may not be any real reason to control the weather; the global warming theory has been highly disputed and many scientists say there is actually a global cooling coming up.

If chemtrails in the air cause cancer and other illness, what reasoning could there be behind putting millions of people’s health at risk?