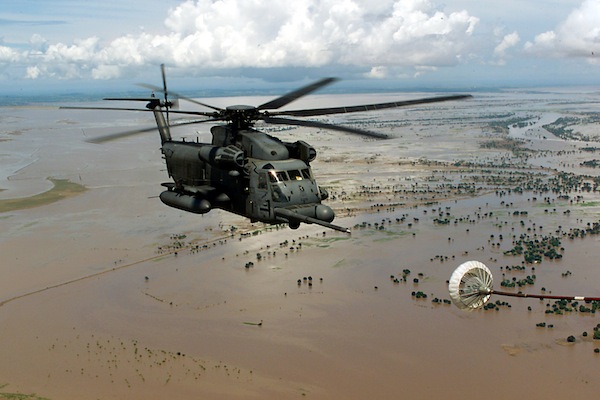 As the planet continues to free fall into total meltdown (covered in the article below), mainstream media is following their marching orders of denying or omitting any discussion of climate engineering at all costs. The gravity of what is unfolding around us all cannot be overstated. With each passing day it is becoming more and more difficult for the power structure to hide the magnitude of climate disintegration. As the unravelling becomes ever more clear, the geoengineering issue will soon enough be impossible to hide. Once the population nears critical mass of awareness in regard to the climate engineering issue, the “collective insanity” that currently runs the planet will become even more dangerous. It is impossible to know what cards those in power may play as the walls close in on them. Certainly, they will use their mainstream media empires to hide the lethal climate modification programs from the public till the last possible moment.
Dane Wigington
geoengineeringwatch.org

A recent report said the Defense Department should set benchmarks for adapting to global warming. The agency agreed. 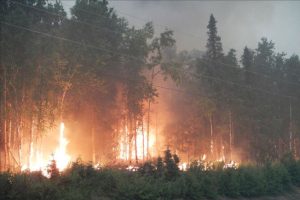 A wildfire burns on a military training range in Alaska.

Time to put some milestones on the “Roadmap.”

Whether from rising seas, eroding coasts, thawing permafrost or worsening wildfires, American military installations across the world are in the line of fire from climate change, the Government Accountability Office and the Department of Defense have found. 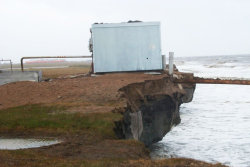 Following up on a 2012 “Climate Change Adaptation Roadmap” by the Defense Department – which had previously affirmed that military bases faced rising challenges from global warming – the GAO released a report Monday aimed at spurring the Pentagon to action, calling on military leaders to set benchmarks for when and how their bases will protect themselves from the consequences of climate change.

“Without a project plan in place that includes milestones, the department may not be able to effectively implement actions to meet its goal of carrying out vulnerability assessments for all its facilities,” the report stated.

The Pentagon said it concurred with the findings.

“We are committed to maintaining the resilience of our installations in support of our mission, our warfighters and our communities,” John Conger, acting deputy undersecretary of Defense for Installations and Environment, wrote in a letter to the GAO. “We will continue to integrate consideration of climate change and associated impacts across the Defense enterprise.”

GAO representatives visited 15 military installations, and at 12 of them found officials who said they had observed not only rising temperatures, stronger and more frequent storms, and changing precipitation patterns, but had also seen how those changes created “potential impacts of mission vulnerabilities,” the report said.

Thawing permafrost muddied roads, left, and reduced access to training areas in Alaska. The image at right shows the same road after it was regraveled.

Noting that the early-warning system is designed to operate even with the loss of one or more radar sites, it added, “Air Force headquarters officials noted that if one or more of these sites is not operational, there is a risk that the Defense Department early warning system will operate with diminished functionality.”

Meanwhile, training at an Army installation was put on hold for three weeks in 2003 because thawing permafrost had made the ground there impassible. Further melting since this time now threatens to open holes in a drop zone used for airborne training, and freezing rain – which has more frequently replaced snow as temperatures have warmed – has damaged equipment, delaying certain training for repairs.

In the Pacific at Joint Base Pearl Harbor-Hickam in Hawaii, 43 straight days of rain in 2008 led to mudslides and flooding that damaged housing and other infrastructure on a base.

And even as that installation endured seemingly endless rain, other areas in the Pacific were parched. In a training area associated with Marine Corps Base Hawaii, drought sharply increased the risk of wildfires, forcing officials to reduce live-fire training and limit the types of ammunition used. When wildfires did break out, they forced officials to restrict certain training operations, wholly suspend others, and prevent aircraft from landing due to limited visibility from smoke.

In the Southwest, a dry lake bed, left, serves as an emergency runway for testing and training missions. At right, an official takes measurements after a flash-flood inundated the lake bed.

“Units have had to spend extra time and money to travel to other installations to complete their required training,” the report said.

Then there were the storms: Edwards Air Force Base in the California desert suffered a flood that lasted eight months, making one of its emergency runways unusable. Surges from more severe storms along the coast, meanwhile, have put Naval bases at risk, such as at a dry dock where a submarine is being cut in half to be used for training.

“Officials explained that they were concerned about possible storms and associated storm surge, noting that if salt water was allowed to flood the submarine’s systems, it could result in severe damage. Such damage would delay completion of the submarine’s lengthening by three to four months,” the report said.

The Pentagon said it’s prepared to take these challenges head-on.

“Climate change may be one of any number of factors that can affect facilities and impact mission and readiness,” the agency said in a response to the report. “The Department will work to review processes and criteria … to strengthen consideration of climate change adaptation.”