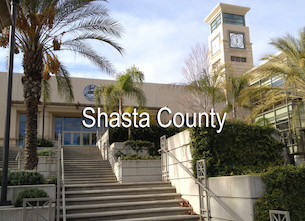 On July 15th, 2014 a group of experts testified environmental heavy metal contamination (likely a direct result of climate engineering) before the Shasta County Board of Supervisors in Northern California. On June 30th, 2015 a group of citizens returned to speak in front of the board in order to confront them about the Board's inaction on the verifiable contamination. In this latest update, Northern California's ABC station, KRCR, has done their best to spin the actual testimony of facts given in 2014 by experts and County representatives. The 2+ minute video below is the latest TV news update.

In 2014 Shasta County Air Quality representative Rick Simon admitted in his testimony before the board that the current air quality testing equipment is not capable of detecting any air particles in the range of those in question (nano particles).

"We measure for PM-10" , stated Mr. Simon (PM-10 means 10 microns which again are particles exponentially larger than the heavy metal nano particles in question. It is not possible to detect elements that are astronomically smaller than the currently used testing equipment is designed to detect and Simon knows this. The smaller the particle, the more dangerous it is for the environment and the human body because it is then much more bioavailable).

So why is KRCR implying that the Shasta County Board of Supervisors has followed through with their responsibilities to investigate and disclose a public health hazard? This is simply not true. Here is the unvarnished reality, Shasta County officials have not done anything to investigate or disclose an indisputable heavy metal contamination (that state certified lab testing proves) which is a public health hazard (REGARDLESS OF THE SOURCE). They claim that this issue is "not in their jurisdiction", again, not true. This governing board has been given test data to prove the presence of the dangerous heavy metal contamination as far back as 2008, they have done virtually nothing to investigate or disclose this critical health threat to Shasta County citizens. There is currently a team of 6 US attorneys and 2 Canadian attorneys (and other qualified professionals) that are focused on this contamination issue. The legal consensus of this group of legal professionals is this, that county public health and safety agencies have a mandated, legal, and moral responsibility to disclose any and all public safety threats. Again, for over 7 years, no investigation and no public disclosure has taken place from Shasta County officials. As the verifiable heavy metal contamination continues to take it's toll, and the reality of this contamination can no longer be hidden, the question of legal liability will certainly be the primary focus of a justifiably outraged population. The 2014 edited testimony of experts is below.