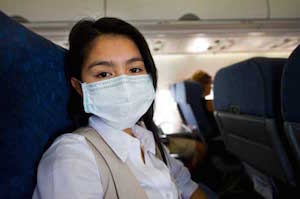 Approximately 50% of the air circulated in commercial aircraft interiors is compressed "outside" air. The toxic air that airline passengers and crew members are exposed to is finally being acknowledged. Though there are likely a number of factors contributing to the toxic cabin fumes, is there any reasonable doubt about the contamination posed by the constant atmospheric spraying which is the major component of global geoengineering? All aircraft that fly through the sprayed heavy metal and chemical mixes associated with climate engineering are exposing their crews and passengers to a very serious health threat. Since many of the elements used in the geoengineering programs are bioaccumulative, the damage is now truly starting to show up in regard to human health impacts in those who frequently fly.
Dane Wigington
geoengineeringwatch.org 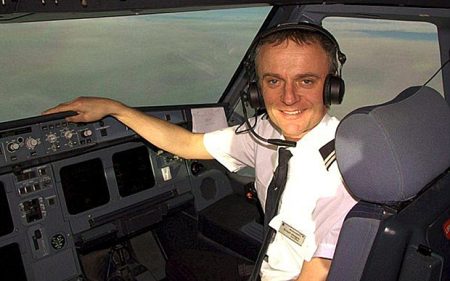 Toxic fumes in cabin air pose a health risk to frequent fliers and aircrew, a coroner has said in a landmark report.
Stanhope Payne, the senior coroner for Dorset, said people regularly exposed to fumes circulating in planes faced “consequential damage to their health”.
Mr Payne, who is inquiring into the death of Richard Westgate, a British Airways pilot, called on BA and the Civil Aviation Authority (CAA) to take “urgent action to prevent future deaths”. Most airline passengers, who fly only occasionally, will not be affected by the problem, but some frequent travellers who are genetically susceptible to the toxins could fall ill.
Mr Payne’s call for urgent action is likely to be welcomed by campaigners who have raised similar concerns for a number of years.
His report, obtained by the Telegraph, is the first official UK recognition of so-called “aerotoxic syndrome”, a phenomenon long denied by airlines but which is blamed by some for the deaths of at least two pilots and numerous other incidents where pilots have passed out in flight. Co-pilots can normally take over, but campaigners claim the syndrome is a suspected cause of some mid-air disasters.
Frank Cannon, the lawyer for Mr Westgate’s case, said: “This report is dynamite. It is the first time a British coroner has come to the conclusion that damage is being done by cabin air, something the industry has been denying for years.”
Mr Cannon said he was acting for approximately 50 other aircrew allegedly affected by the syndrome, working for airlines including Emirates, Cathay Pacific, Etihad, Thomas Cook and easyJet. He is also representing two passengers.
Commercial passenger planes have a system which compresses air from the engines and uses it to pressurise the cabin. But it can malfunction, with excess oil particles entering the air supply.
In a confined space, with the air recirculated, the cumulative effect on frequent fliers, especially aircrew, can be harmful, the coroner said.
Mr Westgate, a senior first officer, died in 2012 after claiming he had been poisoned by toxic cabin fumes.
In his “prevention of future deaths report”, produced last week, the coroner says that examinations of Mr Westgate’s body “disclosed symptoms consistent with exposure to organophosphate compounds in aircraft cabin air”.
In the report, sent to the chief executive of BA and the chief operating officer of the Civil Aviation Authority, the coroner raises five “matters of concern”, including that “organophosphate compounds are present in aircraft cabin air”; that “the occupants of aircraft cabins are exposed to organophosphate compounds with consequential damage to their health” and that “impairment to the health of those controlling aircraft may lead to the death of occupants”. He also says there is no real-time monitoring to detect failures in cabin air quality and that no account is taken by airlines of “genetic variation in the human species that would render individuals … intolerant of the exposure”. 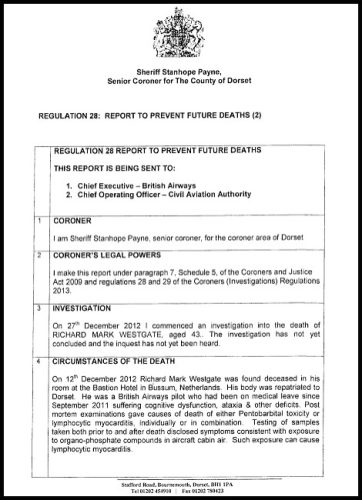 He demands that BA and the CAA respond to the report within eight weeks, setting out the action they propose to take. The report, made under regulation 28 of the Coroners’ Investigation Regulations 2013, is not a full verdict from an inquest, which has yet to be held in this case.
Tristan Loraine, a former BA captain who claims toxic air poisoning forced him to leave his job, said: “I took ill-health retirement only a year after completing the Iron Man triathlon. I had about 10 medical experts give their view to the CAA that I was suffering from ill-health effects of contaminated air.
“From the minute I got sick until when I left the airline, I never saw a BA employee.” 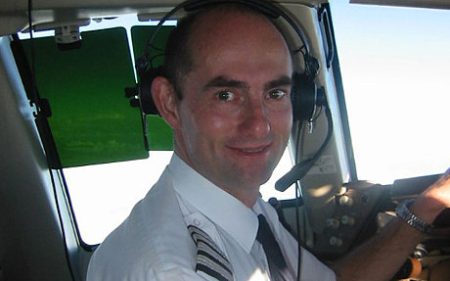 Former British Airways pilot Captain Tristan Loraine
Mr Loraine, who is making a documentary about the issue, said he had been left with numbness in his fingers and feet and that he sometimes found it difficult to recall information. He said that a friend in BA — not Mr Westgate — had suffered the same symptoms, continued to fly and died from a brain tumour aged 44.
Mr Cannon said: “There are major crashes where we suspect the only plausible explanation is that the crew were suffering from cognitive dysfunction. More commonly, it causes incredible misery — very fit, intelligent and motivated people fall over sick. The first thing BA and other airlines have to do is recognise and take care of their injured aircrew.”
Most passengers who fly only occasionally will not be affected by the problem, but some frequent travellers who are genetically susceptible to the toxins could fall ill, with around 10 per cent of the population affected. Their bodies are unable to detoxify quickly enough and an accumulation of toxic material over time becomes dangerous. The main vulnerability is suffered by aircrew, who spend much of their lives on board.
Official records from the Civil Aviation Authority show that oxygen masks are being used by pilots and crew at the rate of at least five times a week to combat suspected “fume events”.
The official safety watchdog, the Air Accident Investigation Branch, has called for aircraft to be fitted with equipment to detect any contamination of cabin air.
A spokesman for BA said it could not comment on the case, but would consider the coroner’s report and respond. The airline cites independent studies commissioned by the Department for Transport, which found “no evidence that pollutants occur in the cabin air at levels exceeding available health and safety standards”.
The Government’s position is that “concerns about significant risk to the health of airline passengers and crew are not substantiated”. A spokesman for the CAA said it would consider the report in detail but claimed it was “nothing that passengers or crew should be overly concerned about”.
Mr Cannon said: “I see this as an impending tsunami for the airline industry — it’s been ignored for so long.”
The disclosure of Mr Payne’s report comes ahead of a meeting in London this week of a group set up by the International Transport Workers’ Federation to examine the issue of contaminated air on planes. A spokesman for the ITF said: “There is growing published evidence of the toxicity of these oil fumes and the increase in reported fume incidents in which flight safety was compromised because of crew member impairment.”
Source: The Telegraph, article by Andrew Gilligan

27 Responses to “Aerotoxic Syndrome” Is Affecting Airline Passengers And Crews