An Iceberg The Size Of Lower Manhattan Just Broke Off Greenland 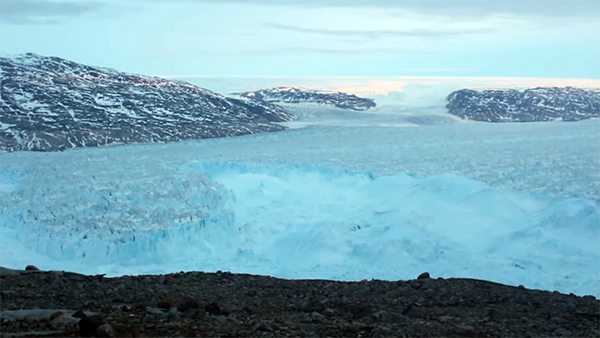 Iceberg calving events are among the more epic spectacles on the planet. But rarely have humans been lucky enough to see them happen in real time, much less capture one on camera.

A team of New York University (NYU) researchers has now done just that, capturing video footage of a four-mile long iceberg snapping off east Greenland’s Helheim Glacier. The footage is a stark illustration of one of the most important processes reshaping Earth’s coastlines today and in the future.

Greenland’s outlet glaciers are like frozen rivers, flowing to sea from the island’s interior. As ice enters the ocean, it raises sea levels, a process that is expected to quicken as Greenland warms. In recent decades, the ice island’s “big three” outlet glaciers—Helheim, Jakobshavn, and Kangerdlussuaq—have sped up substantially, a phenomenon scientists believe is linked to climate change.

The new iceberg broke off Helheim over the course of 90 minutes near midnight on June 22. The research team was lucky to bear witness to it while they were out in the field doing routine equipment maintenance. Denise Holland the logistics coordinator for NYU’s Environmental Fluid Dynamics Laboratory, told Earther the scientists were just getting ready to go to sleep when the glacier started making a loud, sustained rumbling noise. She immediately got up and set up her video camera.

“It just happened right in front of our eyes,” Holland told Earther. “The amount of ice was astonishing, the noise was astonishing. Nobody was speaking because we were all too hypnotized by this event unfolding.”