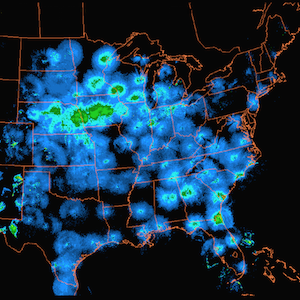 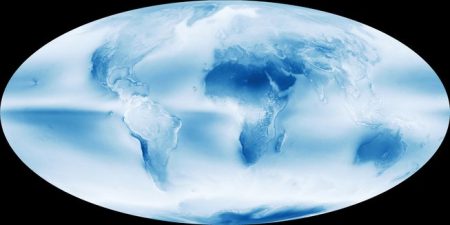 The next image is a combination satellite/radar map. In the combination format map the more heavily aerosolized cloud cover shows up as the brightest white. The goal of SRM (solar radiation management) is to blot out as much sky as possible for the stated purpose of global warming mitigation, but even NASA admits the "aircraft clouds" are making global warming worse overall, not better. A "Scientific American" published study states "geoengineering could turn skies white". Wherever there is moisture, there will generally be the most consistent and heaviest spraying. This has the effect of greatly diminishing the overall precipitation that otherwise would have occurred and scattering the aerosolized cloud cover over vast areas (though deluges can also increase where too much moisture accumulates). The bright white aerosolized cloud cover broadcasting out from the areas of precipitation in the map are indicative of the aerosol spraying that is taking place in each region. A massive heavily sprayed zonal flow of moisture is very visible plowing into the entire west coast, yet there is almost no precipitation showing up for the reasons already cited. Historically, counterclockwise swirls of low pressure storms constantly pounded the Pacific Northwest with heavy precipitation. Now, more often than not, there are just large drifting massive canopies of heavily aerosolized cloud cover with some rain in the most dense areas of moisture build up. "Mostly sunny" is now also a common meteorological term of choice and is often used in "forecasting" days with heavy spraying. "Meteorologists", in so many cases, are now simply paid liars reading the scripts they are given . 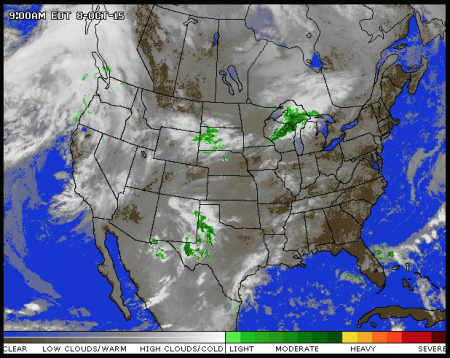 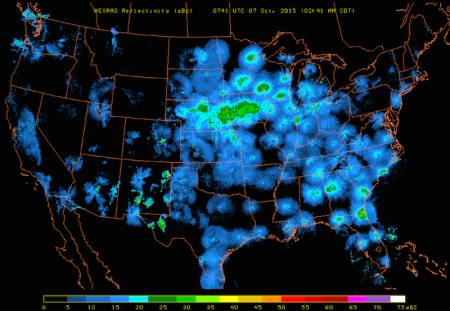 Take a good look next map below, If you think the images in the map are just "clouds" showing up on radar, they are not, and the National Weather Service admits it. So what are these large and very distinct radar images from? According to the National Weather Service, it's all just "butterflies". No, this is not a joke. "Official statements" from "official sources" are becoming astounding beyond comprehension. 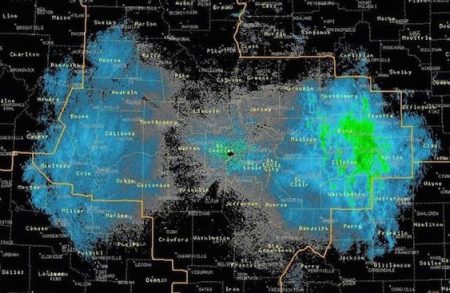 "Mother Nature Network" claims this upper level aerosol accumulation shown in the photo below (with a very clear radio frequency pattern) is just a natural "rainbow cloud", do you believe them? 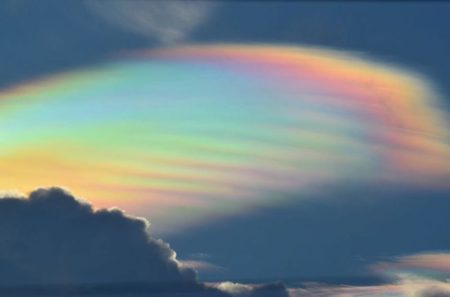 Below is the NOAA forecast (scheduled weather) map for the middle of October. Each shade represents a 2-3 degree "departure from normal" temperature zone. Places in the western US are thus "forecasted" to be a record shattering 20 to 25 degrees above normal which has already been the case for an extremely long time. The record heat and drought continues to fuel record forest fires in the region. 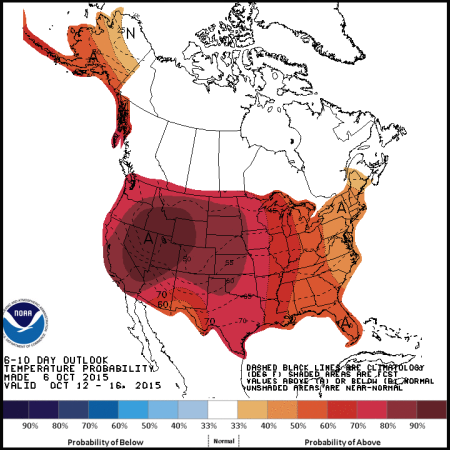 The next image shows that the remaining pool of cold air at the top of the world is rapidly shrinking as the geoengineering juggernaut of insanity continues to shred the ozone layer and the climate system as a whole (along with other contributing anthropogenic factors). 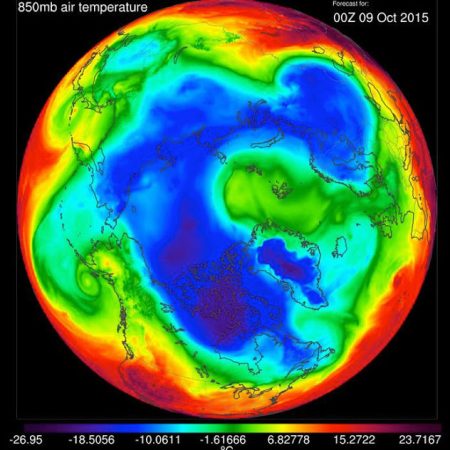 The global temperature maps below reflect the true state of our rapidly warming completely geoengineered planet. 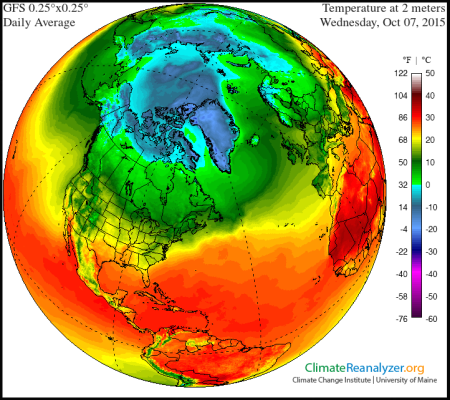 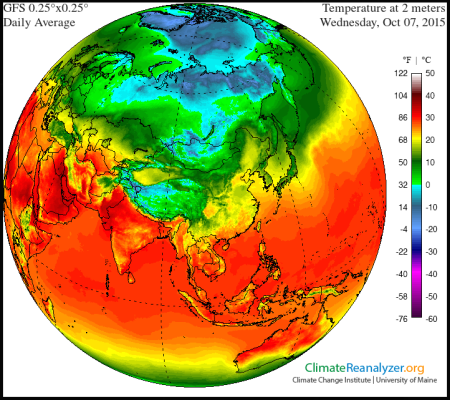 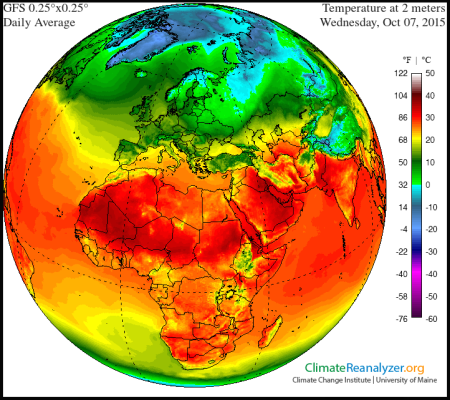 Ocean temperatures are already radically above normal, especially in the Arctic ocean as the mapping below clearly shows. 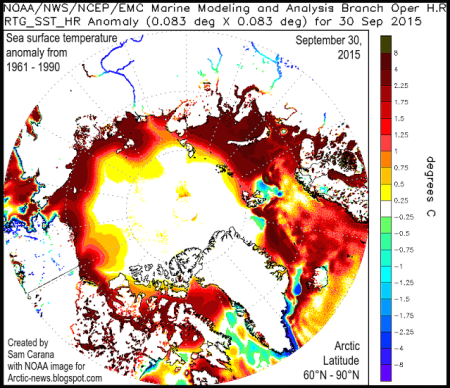 The current Arctic ice volume (ice mass) is at all time record low levels and continues to decline very rapidly due to all the record warm conditions already cited. 2015 saw the lowest Arctic ice "maximum" ever recorded. So how is it that the Arctic ice "extent" (surface area) hit it's minimum for the year on September 11th, 2015 (4th lowest extent ever recorded), and has increased since? Welcome to geoengineering and chemical ice nucleation. What is the true extent of climate engineering experimentation currently occurring in the Arctic?

Where are we heading if we stay on the current course? Few are yet willing to face the fact that our planet will very soon not support life unless there is a complete change of direction on many fronts, starting with the complete cessation of the climate engineering insanity. Geoengineering is fueling countless catastrophic scenarios on our planet including mass methane release in the Arctic. We are on track for "Venus Syndrome". Though industrialized civilization is already in its final stages and will soon collapse, we could yet salvage a planet that could sustain life. With each passing day we are determining our own future by what we do, or don't do. The greatest single leap we could collectively make in the right direction is to expose and halt the weather warfare assault. Arm yourself with credible data and pass it on to others. Ask them to do the same. We must make every day count in this critical fight, time is not on our side.  DW