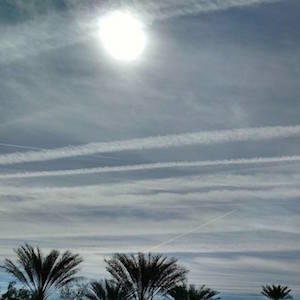 Clifford Carnicom is a veteran in the battle to expose and halt the ongoing climate engineering. He first released a documentary film on the subject in 2005 titled "Aerosol Crimes". This film was very helpful for raising awareness, I personally purchased about 2000 copies and distributed them. The video linked below, "Cloud Cover", is an updated and condensed film from Clifford Carnicom. In this 43 minute documentary, many dire aspects of the ongoing climate engineering nightmare are addressed in a very straight forward fashion. The only aspect of the film that I would dispute is the notion that the shorter bright trails are conclusively "condensation trails". Various spraying applications are constantly observed and many are not the most visible horizon to horizon trails. The shorter bright trails generally produce the silvery white skies that are now so common as the power structure appears to be making an effort to be more covert with the spraying applications. High bypass turbofan jet engines are by design nearly incapable of producing any condensation trails except under the most rare and extreme conditions. "Cloud Cover" shows very moving testimony from a former mainstream media reporter that outlines the extreme effort of the media and the power structure to eliminate any and all possibilities of the climate engineering story getting press coverage.This video is informative and compelling. It is a valuable tool in the fight to expose geoengineering and well worth the time to view.
Dane Wigington
geoengineeringwatch.org

13 Responses to “Cloud Cover”, A Documentary On Climate Engineering