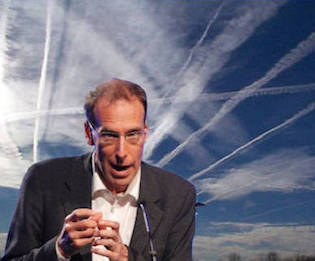 Why is society so easily kept in the dark and oblivious to dire and immediate threats? One primary reason is the completely biased coverage of critical issues by media sources that claim to be objective. In the "Ecoshock" radio show linked below, Alex Smith (the host for Ecoshock who has already been listed in the "disinformationdirectory.com) interviews not one, but two well known ardent geoengineering deniers.

The first 25 minutes is spent with internationally known geoengineering David Keith. In 2010 David Keith was pushing for the dumping of 20,000,000 tons of aluminum nano particles into the atmosphere by spraying it with jet aircraft. In 2010 I confronted Keith about his proposals at an international geoengineering conference, his response was damning to say the least.

By the time Keith appears on the Stephen Colbert show, he seems to find humor in the catastrophic issue of geoengineering and has altered his proposal to the dumping of 20,000 pounds of sulfuric acid into the atmosphere. What is David Keith's part in the ongoing disinformation campaign to hide the geoengineering reality? The answer falls into one of three categories, he is either clinically blind, completely oblivious (or in denial) to the verifiable ongoing climate engineering reality and thus totally unqualified for the position he holds , or he is a paid liar. I will leave it up to the individual investigator to decide.

In the case of Rose Cairns, the same points should be considered. Cairns has been featured in the "disinformationdirectory.com" for her part in the climate engineering denial machine. Of course Ecoshock and their guests did their best to constantly use the non-science "chemtrails" term. Media sources that are trying to spin and marginalize the climate engineering reality insist on using the "chemtrails" term as mainstream media hitman David Pakman proved in the 15 minute interview he did with me.

Another factor that discredits the anti-climate engineering movement is the astounding denial of global warming in spite of the mountain of facts proving beyond any doubt that the planet is in total meltdown. Climate engineering is helping to fuel the meltdown overall, not mitigating it. Scanning the headlines at THIS LINK will give more credible facts on the actual state of the climate.

The interview below is important to listen to for those that wish to better understand how the dire issue of climate engineering is discredited by "scientists" and "media" that have chosen to do so. If you don't appreciate the biased information put out by Ecoshock on the the issue of climate engineering, let Ecoshock know how you feel. It would also be productive to let David Keith (david_keith@harvard.edu) and Rose Cairns (R.Cairns@sussex.ac.uk) know your thoughts in regard to their part in covering up the climate engineering crimes. A written account of the interview below can be found HERE.