Exposure Of Sky Striping Program Will Come Through Local Economy 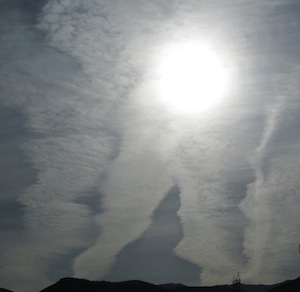 The Future of Freedom: A Feature Interview with NSA Whistleblower William Binney from Tragedy and Hope on Vimeo.

The disk from the federal government contains two files. The data covers two days in 2014 that I am reviewing as I cover Chattanooga’s biggest environmental and health story of the past 25 years.

The first jet flight on the list, with beacon code 7122, is covered in 1,287 data points. That narrative is so unwieldy to account for the jet’s shifting longitude and latitude in its flight over Chattanooga.

A second file describes Nov. 2, another Lord’s Day. The database is 23,467 lines deep in 13 columns. It creates 305,071 data points from which I am to draw conclusions about the stratospheric aerosol geoengineering program that I suspect is a major source of air pollution in Southeast Tennessee.

The data is for civilian flights only. An FAA systems operations services acting vice president says in a March 12 letter he’ll get back to me about military overflights of Chattanooga these two days and will send me information after obtaining permission. Sky striping is poisonous to the air, but outside regulatory authority.

My FOIA request seeks “policies, procedures, practices, agreements and memoranda active in 2013 and 2014 pertaining to the U.S. government’s environmental and weather modification program in this FAA district.” Agency staffer Daniel E. Smiley replies:
Such programs do not fall under the FAA’s jurisdiction. Therefore, the FAA would not have any records responsive to this part of your request.
Boggled with two databases of civilian overflights, I am seeking help analyzing the data.
I doubt Mr. Smiley will be free to supply information about sky striping in military jurisdiction, even if it includes civilian jets under military contract.
I await a human contact. I await a human source to develop the solar radiation management story in Chattanooga and beyond, a person who knows about “Indigo Skyfold,” as the SAG program is reputed to be named in unverifiable Internet chatter. A person with inside knowledge could cinch the story and help pull explain the remarkable visual phenomenon in the city’s airspace.
The source would be the classic whistleblower. An aggrieved civil servant. The U.S. Air Force employee whose conscience about his professional labors bothers him. The tech who’s seen from the inside a major government program whose work is visible to everyone who looks up, but on the ground is veiled by national security. The closet environmentalist with military rank who’s long suppressed his worry about the possible domestic equivalent of Agent Orange. A scheduler in an obscure military agency who handles weather computer modeling data that feeds into the purported aerosol depositing and cloud-making intervention. A single dad who’s too long away from his children serving the U.S. and wants to quit puffing out long white trails above unseen towns and landscapes 40,000 feet below.

The whistleblower’s dilemma is how to make contact with others who, like him, cannot easily escape the total surveillance system of the Orwellian state that is 2015 United States — an illegal and exhaustive series of digital sniffing programs developed by the likes of Bill Binney. This data mining expert is a 36-year former veteran of NSA, where he was director of global communications intelligence. He finally exposed the surveillance operation — ThinThread and Stellar Wind — he’d built.
The spying system encases the U.S. government in a digital wall that prevents revelation, reporting, exposure of state secrets such as its sky striping program, one that ostensibly serves a “solar radiation management” purpose but probably has other goals.
Total surveillance is quietly altering the way people operate.
“It falls back to the principles of totalitarianism, how dictators and so on have operated down through the centuries,” Mr. Binney tells Richard Grove of Tragedyandhope.com in an interview on Vimeo.
It’s know what your people are doing and find the ones who’re not conforming to what you want them to do, and then get rid of them. That’s fundamentally what this process does. It gives them that kind of knowledge about everyone in the country, and if you start to speak up about some issue or something, then they have all that data already assembled on you, and they simply go compile it and see how they could influence you to do what they would conceive would be the right thing. That’s how you use it against people and you make sure they know that you know about what they’ve got. So then they fear you one way or the other and conform to your wishes one way or another  [at 25].

They just have to make sure that everybody knows what they are doing, then people basically change what they’re doing. People I know have already changed how they operate, how they communicate internationally. For example, [author] Chris Hedges is finding it very difficult to do any investigative reporting anymore because he can’t find any sources that will talk to him. So they’re not talking. They’re modifying their behavior, whereas they used to talk to him about things, off the record. Now they can’t do that, or they don’t do that because they’re afraid of being monitored, and the existing government is threatening everybody with prosecution if they “leak.” They still have nine prosecutions pending on the Espionage Act from 1917 with I think nine different people who have been whistleblowers, classic whistleblowers. They’re trying to silence that. And that’s the way they threaten people. And so people, internally in government, have changed how they operate. They are no longer willing to talk to anybody that’s a reporter. And so that’s changing how that we no longer have a free press that can interrogate and probe into government activities [at 26].

Sky striping appears to be a major operation of the deep state, that operation whose mask is government and whose interests are inimical to the public good and commonwealth. SAG is a public health and “climate change” story of underrated significance.

In light of FOIA obscurities, perhaps the best way to tell the story is for the person who wants to talk about the program to avoid making electronic contact with a journalist and to meet him in person. He would have to show up at that journalist’s office or his house unannounced, driving a borrowed car, sans his wireless phone. He would present photocopies or a typed document to the reporter. Or a disk. Or a thumb drive. He might hand over a disposable F$35 Raspberry Pi computer not connected to the Internet. The whistleblower and writer would conduct an interview in a room without any computers present. It could take place after nightfall or on a cloudy day (to defeat some satellite coverage), and no one would know the two individuals had met. An interview would take several hours. Setting it up would be attended with inconveniences, but would not be impossible to arrange. Logistics would be a problem if the whistleblower lives in a city different than the reporter’s. It would be cumbersome to make such a contact. What if the source knocks on the reporter’s door at 10 p.m. and his suspicious wife says he’s just gone out of town for two days?

The meeting would be old-style gumshoe, entirely apart from national economy.

Like cash vs. the credit card. Like the personal letter vs. the email. Like a chat over a coffee vs. a phone call. Like a printout over an emailed attachment. The dissenter would have to disengage from his digital avatar. He and the reporter would commune face to face.