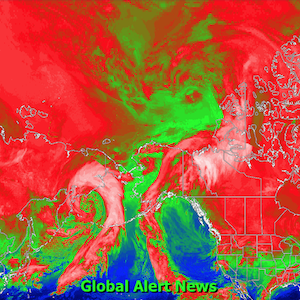 Climate engineering operations continue to intensify around the world, as are unprecedented weather related catastrophes. The environment is not the only thing that is collapsing, the days of the US dollar dominated world are now numbered. What are the ramifications? How desperate will the world's largest military become? Why are swarms of military helicopters overrunning LA? A new “science study” concludes that planes passing through clouds miraculously produce up to 10 times more rain or snow, while simultaneously and radically lowering precipitation temperatures. The same study also tries to assure us that such profound effects have absolutely nothing to do with any emissions from the aircraft itself. Are we really expected to believe this? How long will academicians continue to cover the tracks of the climate engineers? The latest installment of Global Alert News is below.

Though the sand in the hourglass continues to run down, ever more catastrophic environmental conditions are finally forcing more to wake up and face reality. Those who are already awake are desperately needed to stoke the fires of awareness. Every day counts, share credible data from a credible source, make your voice heard.
DW