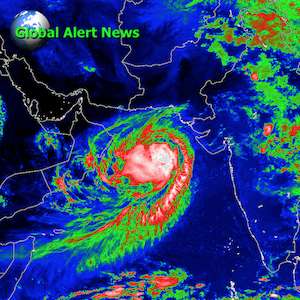 Normalcy bias and apathy continue to rule the day for the majority of populations in first world industrialized nations. As biosphere and societal collapse accelerate, few are yet willing to face or acknowledge what is unfolding on the wider horizon. How much longer can mainstream media propaganda maintain the facade of normalcy? Can populations be awakened in time to make a difference? The latest installment of Global Alert News is below.

The challenges we collectively face are immense, but not yet impossible to alter in the right direction. All who are awake and aware are needed in the desperate effort to fully expose the atrocities in our skies and on countless other fronts. Share credible data from a credible source, make your voice heard, make every day count.
DW

This is what the meteorologists call "partly cloudy”. Does this look normal to you? The 1 minute video below was captured in Henderson, Nevada. Video credit: Byron Kacheris

Thank you for supporting and helping us to increase awareness through social media by liking and following us on Facebook. You can easily do this without leaving this page, just click "Like Page" button located on the image below.