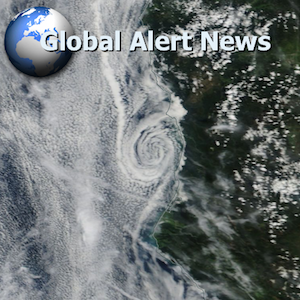 The Legal Alliance To Stop Geoengineering (LASG) is continuing with the effort to gain critical information from government agencies. The global climate engineering assault is completely out of control, the consequences will be total if these programs of planetary omnicide are not exposed and stopped. The US is ready to instigate WWlll by using the North Korea missile testing as an excuse. What is the US doing at the very same time? Testing ICBMs (Inter Continental Ballistic Missiles). Fukushima continues to get worse with a "huge red blob of nuclear waste" being reported off the US west coast. The latest completely engineered chemically ice nucleated "snowstorm" has devastated crops and killed as many as 10,000 cows. The Saudis now own major US oil infrastructure with the full support of our criminal government. The Saudis are also enjoying the US government's support of their ruthless bombing of Yemen, one of the poorest nations in the world. The military industrial complex is ramping up their aggression on countless fronts with president Trump as their new mascot. The office of the president is now just a part of the power structure, it has been so for a very long time. The latest installment of Global Alert News is below.

Willful blindness and blatant denial are running rampant in the ranks of the human race. The more critical our collective reality becomes, the more fanatical the behavior will be from many. Fully facing dire realities is extremely difficult, to ignore those same realities is certain suicide. Any that are truly awake are desperately needed to help with the effort to wake others, this is the only way forward in the fight for the greater good.
DW