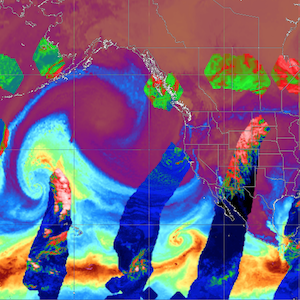 The mass distraction theater has so far successfully kept all sides of the fence occupied and completely distracted from the wider horizon, this result is a primary objective of those who write the script. What does Bill Gates have to say about the connection between weather, vaccinations and population control?

Increasingly extreme engineered weather fluctuations are beginning to gain some attention, but not enough. The geoengineers do not generally have the capability of chemically cooling the entire US, so the pendulum of extreme temperatures swings back and forth. The US West is now the recipient of a cooldown scenario, while the US East is going to temporarily become the extreme warming climate engineering sacrifice zone.

So long as the climate science community continues to deny the ongoing blatant geoengineering onslaught, the majority of the public is all too happy to keep their eyes closed to the atrocities in our skies. The latest installment of Global Alert News is below.

We must look past the smoke and mirrors, great challenges are now very near. All are needed in the critical battle to wake populations to what is coming, we must make every day count. Share credible data from a credible source, make your voice heard. Awareness raising efforts can be carried out from your own home computer.
DW