Making Your Voice Heard, An Activist’s Message To A Geoengineer 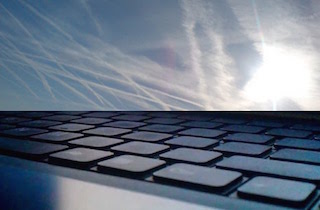 In the email exchange contained further down in this post, a very justifiably concerned father with an 8 year old daughter addresses internationally recognized geoengineer David Keith about the ongoing climate engineering dangers and Mr. Keith's part in these programs. Having met David Keith at an international geoengineering conference, and having a fairly extensive knowledge of his actions relating to his pro-geoengineering advocacy, I have long since concluded Keith is the epitome of what is wrong with the human race. David Keith has absolutely no regard for the truth, nor does he have any regard for the global cataclysm that the ongoing climate engineering programs (which he is doing his best to sell to the public) are inflicting on the planet and every one of us. The 5 minute video below is an exchange I had with David Keith at a geoengineering conference in 2010, the exchange was quite damning for Mr. Keith.

Geoengineering is not really a moral hazard, it's like free-riding on our grandkids.

I had a difficult time gaining access into the conference above, the AAAS organizers (American Association for the Advancement of Science) researched me and initially revoked my press pass. After David Keith's self incriminating and damning statements during our exchange, all press was banned from a geoengineering conference the following month. Keith further exposes himself in this 6 minute interview with Stephen Colbert.

Jonathan Létourneau is the father mentioned earlier, his heartfelt and moving communication with geoengineer David Keith is below. People like David Keith need to hear from justifiably outraged citizens. Mr. Keith's public contact is below, let him know what you think of his part in the climate engineering crimes, but don't stop there. We must all do our best to effectively and credibly sound the alarm in this most critical battle,  each and every one of us is needed in this battle.
Dane Wigington
geoengineeringwatch.org

Making Your Voice Heard, An Activist's Message To A Geoengineer

I wrote to David Keith at the only email address I know at david_keith@harvard.edu and here is my conversation so far as of now.

Mr. Keith,
I’m ashamed to be Canadian like you, knowing you’re poisoning our skies with your geoengineering project. How dare you? I think you don’t have children, otherwise you wouldn’t accept to poison them, or would you? You must be brought to trial for planetary genocide! You will kill us all! How can you sleep at night? How can you look at yourself in the mirror? You should commit suicide before it’s too late. And don’t tell me you’re doing it for the good of people, cause we’re not bugs, damn it! And don’t tell me the planes leave contrails, because I am damn aware it is not.
https://www.geoengineeringwatch.org
Why only or mainly spray NATO countries?
David Keith is humanity’s killer!

HIM-
How can you write stuff like this?
I am a father with kids I love who works to protect the environment.
Not everything you read on the web is true.
Cheers,
David

Protect the environment? By spraying it? What kind of logical sane human would say that? And you dare ask me how I can write stuff like that? Plus you are not denying the fact that the sprayings are going on. Don't believe everything on the web you say? Then I shouldn't believe you, right? Chances are, between you and Dane Wigington, I think the later has more credibility than you. You said in an interview that this stuff has to come down to earth, well unless you live in a bunker with your kids, then all of you are being poisoned. And you don't seem to care since you continue being in favor of this ongoing planetary suicide. You're just like all the egomaniacs in power, you'll only wake up to the dangers when it's too late. Did you know? "David Keith Exposed" EXPLAIN THIS YOU SON OF A B***H!
(Here I posted this page: https://www.geoengineeringwatch.org/wp-content/uploads/2014/03/Flaming-Arrow-Package.html THEN I ADDED) How much are you paid to deny, David, how much? When you look at your kids, do you dare tell them "Daddy works for the environment by spraying all sorts of poisonous and deadly chemicals in the sky, and that is millions of tons a year. Don't worry, kids, only a little portion fall to the ground, it's not dangerous." So David, again I ask, WHAT BULLSHIT DO YOU TELL THEM TO JUSTIFY YOUR MURDEROUS ACTIONS? To prevent global warming? But that is only one reason given and certainly there are more obscure agendas, and you know it! Now when my 8 year old HANDICAPPED daughter looks up to the sky, with her eyes full of innocence and tells me "Daddy, why are the bad people putting poison in my sky? They don't like us? They want to kill us, daddy. I'm scared! I want to live, daddy." HOW THE F**K DO YOU WANT ME TO ANSWER THAT, DAVID? HOW????????? Not only are you responsible for my daughters fears, but you're the one that sold your concept to the elite across the globe to make sure this practice becomes impossible to stop.
Now I damn sure know you will try to get the authorities to hunt me down and either kill me or silence me but know this, I WILL NEVER HURT ANYONE IN MY EXISTENCE! NOR YOU, NOR ANYONE ELSE! I'm just speaking out my anger. The need for threats is childish and doesn't have it's place in a debate. If this message offends you, then my point has been made, if it scares you, it's not my problem and not my fault, you are scaring yourself hiding behind your lies.
With that being said, I hope you will have the guts to come out publicly and say that it was all a mistake and that it has to be stopped at all cost! Otherwise, keep denying and return to your underground bunker and keep lying to your children.
CHEERS

HIM-
What do you think you will achieve by swearing at people? How does that make the world better.
I would risk my life to expose illegal spraying of toxins. Here is my view on the matter: http://www.keith.seas.harvard.edu/chemtrails
David

I Then replied with this-

Swearing doesn't make the world better, but try to debunk the truth, David. You admit that your life would be threatened if you exposed illegal spraying of toxins, making that THE statement of truth. Meaning that you admit it does happen, but you are scared for your life. If you really know of such facts, then you know who does it too, right? With that being said, why not join people all around the world, whistleblowers, pilots that are now speaking out, ex-military personnel that came out as well? I mean, if we die for this cause, but in the end we are able to declassify this ongoing mass-murder, then at least we will have died for our children. They did not ask to be born, can we help them grow up in a safe world? No? Just between you and I (and trust me, I'm simply a normal Canadian citizen), you fear nothing from me, if there is someone who must fear, it's me, I mean I don't hide my identity while writing to you, I use Outlook, so either I'm stupid or I just think that my daughter's life is worth the risks. Remember what I wrote before:
my 8 year old HANDICAPPED daughter looks up to the sky, with her eyes full of innocence and tells me "Daddy, why are the bad people putting poison in my sky? They don't like us? They want to kill us, daddy. I'm scared! I want to live, daddy."
So, David, do you care enough for your kids to do something about it? Or you prefer receiving your paycheck in exchange for your silence? In my case I say to those in power, if you want me, come kill me! My daughter deserves that I fight for her right to live in a safe world.
I have a question for you, David, Why do those in power want to do what they are doing? What will it give them? When there's nothing left to destroy, what will happen? When all is lost, where will they go? Bunkers? All their lives? Is that a living? Maybe the missions to Mars for the year 2025 has a part to play in this whole scheme.
My last question, David, sincerely, from a father to another, how long do we have before we die? I must know so I can spend the remaining time with my daughter and loved ones. Now don't answer me with any nonsense that you are paid to say, answer me from a father to another. Use another email address if you prefer.
With that being said, is our time limited to days, years, decades?
Please let my daughter know at least if you don't want me to know.

…
So what should I think about all this? Also, my last concern, here is what my 8 years old told me again today, and that folks, hurts me to death, "Daddy, why are the bad people putting poison in my sky? They don't like us? They want to kill us, daddy. I'm scared! I want to live daddy."

How long to live? Can anyone answer me with an accurate response please?

I am thinking of doing a public starve manifestation, would it work? Trust me, I am willing to let myself starve to death for the good of my daughter's future on this dying planet (my girlfriend is scared that with all my online and outside activism, that we will be killed by those in power, I tell her, just take care of our girl if I die).

Thanks to all here for your fight, mine could end soon, just keep the fight strong!

26 Responses to Making Your Voice Heard, An Activist’s Message To A Geoengineer