Mirror, Mirror In The Sky 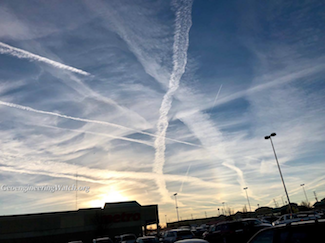 “We’re going to build a mirror factory first and put out nothing but mirrors for the next year and take a long look in them." – Fahrenheit 451 (1953)

The revelation of the climate engineering nightmare couldn’t come to me at a worse time in my life as I was physically and emotionally depleted.   At the age of forty four I felt like I was being put through yet another test and my choice was fight or flight. 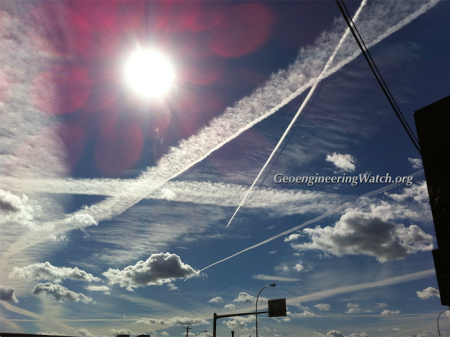 I first noticed the anomaly of the sky in 2011.  On days when the sky was heavily sprayed, as I’d soon learn to identify it, I suffered from a racing heart, severe palpitations and shortness of breath.  That’s when I started connecting the dots.  When I finally realized that the persistent white trails were not normal I somehow, almost miraculously, discovered researcher and activist Dane Wigington’s website, Geoengineering Watch, and all my suspicions were confirmed.  Initially I was extremely angry at the government's involvement in and deception of these lethal covert programs, albeit not surprised.  I was so overwhelmed and felt I couldn't take on this battle as most of my life had been a trial; I was exhausted and unmotivated, compounded by poor health.  But somehow, with Dane Wigington's words of encouragement to not give up, I started to make baby steps in pulling myself out of the quicksand.  I started by trying to inform all those closest to me about geoengineering and believed that they would have the same reaction as I did, I was, however, shocked to discover that they did not.  Rather, I was labeled and ostracized by them.  Thankfully my daughter Christina didn't need any convincing and together we embarked by taking on the role of ‘awakeners‘.  We considered the different possibilities of why geoengineering was being done and we tried to comprehend the bigger picture.  This meant, first and foremost, to observe our own selves.  Being a seeker of truth, I dove into the rabbit hole.

Tracing back to my first steps in this awakening, my initial instinct was that the planet is very sick and that I needed to slow down, minimize my carbon footprint as much as possible and become a conduit of healing energy.  I also felt we were running out of time, so all of my focus and attention had to be applied toward bringing awareness to the planetary assaults from geoengineering.  My daughter and I concluded that we would treat the planet the same way you would treat a body ravaged by cancer except, unlike the proponents of geoengineering, we would approach it holistically.  Without wanting to put blame on anyone, we accepted the responsibility that we are all complicit in the planet's disease and that only through our individual conscious awakening was any healing actually possible.  What can one do to heal their own body of cancer without giving up their power to mainstream medicine?  It starts by taking responsibility rather than judging the disease as an evil, external force.

As I listened to my intuition I was guided to "starve the beast" as you would starve cancer cells.  I decided I would withdraw as much as I could from the system that created this disease to begin with.  As easy as it is to blame others for the demise of our planet, I try to remind myself that until I woke up I was contributing to the tumor that was spreading its roots throughout the world via over consumption, pollution and ultimately climate engineering programs in their counterproductive attempts to mask the effects of the former. 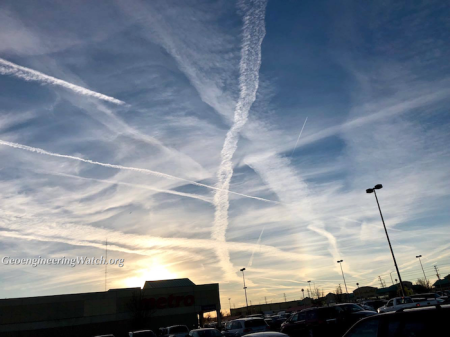 What is the bigger picture of geoengineering, other than humanities creation of a big mirror in the sky reflecting back to us what we all need to address internally in order to take responsibility in this most important battle for Mother Earth and the greater good?  As negative as geoengineering is, it is the ultimate, perhaps final wake up call to the self-destructive reality of our species that has just about consumed its host.  I believe this self-reflection is humanities catalyst to becoming conscious and finding our purpose.  For me it has reignited that eternal spark to persevere when faced with the battle of life or death and reaffirmed my innate knowing that I must be the change I want to see in the world.  We can conquer the atrocities in our skies if only we are willing to face what they reflect back to us.

25 Responses to Mirror, Mirror In The Sky