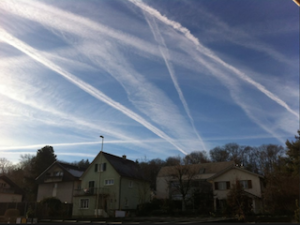 Anti-geoengineering activist Gretchen Thomas has struck a solid blow against climate engineering denial with her recently published editorial submission to the "Sentinel-Tribune". This kind of citizen involvement can make the difference in this battle. This is the kind of effort that we must all engage in at every available opportunity. The constant spraying of highly toxic particulates into our breathable air column is having a catastrophic effect on human health and the environment as a whole. Gretchen's letter below is an excellent example of how we can all help in the battle to bring climate engineering to light. Once fully exposed, a shockwave of outrage will travel through populations around the globe. Only then can the climate engineering be brought to a halt. A sample letter from geoengineeringwatch.org  titled "Flaming Arrow" can be very useful for helping activists to follow Gretchen's example.
Dane Wigington
geoengineeringwatch.org

My awareness of Climate engineering, aka: Geoengineering began about three years ago. Concerned about the persistent haze in the air, I called the county Environmental Protection Agency; we talked about geoengineering, he told me aircraft-related emissions are regulated by Federal Aviation Administration. The FAA dismissed me as misinformed; and directed me to Department of Defense when I used the word, "chemtrail". Geoengineering creates climate changes by definition. Stratospheric Aerosol Geoengineering, (SAG) or Solar Radiation Management, (SRM) describes the dispersal of nano-particulates at high altitudes by jet aircraft; this is visible in the sky if you just look up. Persistent sprayed particulate trails criss-crossing the sky from horizon to horizon, slowly dispersing, are textbook geoengineering flight patterns, not condensation trails as disinformers claim. Many experts conclude that ongoing geoengineering programs are wreaking havoc with our weather and the earth's ecosystems and cycles. Saturating the atmosphere with geoengineering particulates "diminishes and disperses rainfall." Devastating deluges are also connected to climate engineering as moisture that was migrated over one region comes down in a torrent somewhere else. Torrential rains sound familiar? The protective layers of the atmosphere, specifically, the ozone layer and the ionosphere, are being shredded by the aircraft sprayed aerosol clouds. People who claim insufficient proof of ongoing geoengineering should seek their information elsewhere; there is a mountain of evidence: government and military documents, congressional hearings and committee reports, geoengineering patents, and climate modification corporations. International legislation is being drafted to legalize geoengineering. Look up, you can see the evidence with your own eyes. Why are we not being told about the biggest environmental nightmare of our lifetime, which threatens the earth's ability to sustain life and likely a main catalyst of global warming? Geoengineering is not acknowledged in climate change dialogue, or included in key environmental studies, except as potential mitigation for climate change. An Indiana park ranger admitted to me he was ordered not to initiate a conversation on the topic, and the public's not being told because they would panic. I have one thing to say to civil servants suppressing information from those they're paid to protect and serve – you're being sprayed, too. Every breath we take is contaminated with toxic nano-particulate fallout, that persistent haze in the air. Geoengineering must stop. Climate engineering to light. Once fully exposed, a shockwave of outrage will travel through populations around the globe. Only then can the climate engineering be brought to a halt.
Gretchen Thomas
Northwood

19 Responses to Published In Sentinel-Tribune, “Geoengineering Puts Poisons In Air”