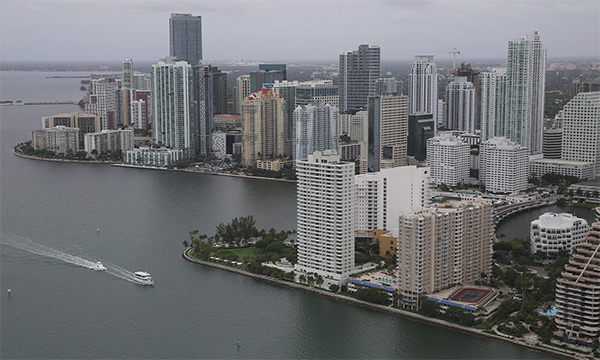 Ocean waters are rising because of global warming. They are rising for two reasons. First, and perhaps most obvious, ice is melting. There is a tremendous amount of ice locked away in Greenland, Antarctica, and in glaciers. As the world warms, that ice melts and the liquid water flows to the oceans.

The other reason why water is rising is that warmer water is less dense – it expands. This expansion causes the surface of the water to rise.

In some places, humans will be able to build sea walls to block off the water’s rise. But, in many places, that won’t be possible. For instance, Miami, Florida has a porous base rock that allows sea water to permeate through the soils. You cannot wall that off. In other places, any sea walls would be prohibitively expensive.

It isn’t just the inevitable march of sea level that is an issue. Rising waters make storm surges worse. A great example is Superstorm Sandy, which hit the US East Coast in 2012. It cost approximately $65 bn of damage. The cost was higher because of sea level rise caused by global warming.

Climate scientists do their best to project how much and how fast oceans will rise in the future. These projections help city planners prepare future infrastructure. My estimation is that oceans will be approximately 1 meter higher in the year 2100; that is what our infrastructure should be prepared for. What I don’t know is how much this will cost us as a society.

A very recent paper was published that looked into this issue. The authors analyzed the cost of sea level if we limit the Earth to 1.5°C or 2°C warming. They also considered the future cost using “business as usual” scenarios.

What the authors found was fascinating. If humans take action to limit warming to 1.5°C, they estimate sea level will rise 52 cm by the year 2100. If humans hold global warming to 2°C, sea levels will rise by perhaps 63 cm by 2100.

The difference (11 cm) could cost $1.4 tn per year if no other societal adaptation is made. This is a staggering number and in itself, should motivate us to take action.

But the authors went further, they considered an even higher future temperature scenario (one that is essentially business as usual). With that future, global annual flood costs would increase to a whopping $14 tn per year.

In the study, the authors considered which countries and regions would suffer most. It turns out upper middle income countries will be worse off, particularly China. Higher-income countries have a slightly better prognosis because of their present flood protection standards. But make no mistake about it, we will all suffer and the suffering will be very costly.

There are four important takeaways from this study. First, while the economic costs are large, there is some range of projections. The actual costs may be lower or higher than the median predicted in the study. This is largely due to the fact that we don’t know how fast Greenland and Antarctica will melt. If they melt faster than projected, things will be worse than what I’ve described here.

Third, what we do now matters. If we can get off the high-emissions business as usual scenarios – if we can increase investment in clean and renewable energy – we can reduce the future costs.

Finally, while scientists often use 2100 as a benchmark year, it isn’t like oceans will stop rising then. In fact, we are committing ourselves to hundreds of years of rising oceans. The ocean has a lot of climate inertia. Once it starts rising, you cannot stop it. So, by focusing only on the year 2100, we are deluding ourselves into underestimating the long term costs.