The Most Serious Threat? Or Climate Science 101? 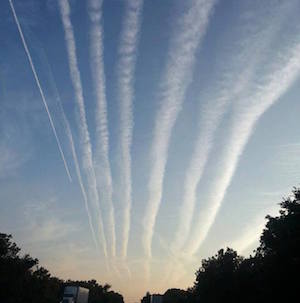 The short article below was authored by Penny Teal, a UC Berkeley trained PhD (chemistry). Dr. Teal has outlined straightforward facts on which sound conclusions can and should be formed in regard to the current state of the climate. Penny has also spoken out about the first hand experiences she has had with universities and their power structure paid for agenda to program their students and thus society.
Dane Wigington
geoengineeringwatch.org

The Most Serious Threat? Or Climate Science 101?

The POTUS (President of the United States, or perhaps Puppet of same) has made it clear, most recently in an address to the cadets at the Coast Guard base in New London, CT, that climate change (more appropriately called global heating, or global meltdown) poses a serious threat to the planet's security. He did not clarify, however, what he meant by "the planet's security". From this citizen's perspective it is very clear that global warming poses an existential threat to every living thing on the planet; the planet itself, however, seems likely to remain on course around its star for millennia to come.

How do we know that global warming is a problem? It's in the data, all of which is available on this website already. Just one example: fourteen of the fifteen hottest years on record are to be found in the new century (that is, somewhat shockingly, in the last 15 years); the fifteenth is 1998. Already 2015 is on track to be the hottest year ever. Okay, that was two examples.

Obviously, if we care about the planet, we need to reverse global warming. And since we humans have caused it, we can, at the very least, stop doing whatever led to the problem in the first place. There is no doubt that human activity, primarily the wanton burning of fossil fuels, is causing global temperatures to rise. If you meet a skeptic, here is a simple defense of that statement – that is to say, that fact.

A Tale of Three Planets

One need only look over the planet's shoulders, toward Venus and toward Mars, then to our own blue Earth, to see a perfect model of the Greenhouse Effect (GE) that keeps life thriving on the planet in the middle, while making it impossible for life to develop (life as we know it, at any rate) on the other two.

The GE is quite simple to explain to the skeptic. Sunlight, in the form of… well, light (electromagnetic radiation, if you want to be more precise, because there are non-visible wavelengths in addition to the light) arrives at a planet, warms its surface, and is radiated back upward as heat (or thermal energy – you have to choose the terms based on the look of understanding or confusion on the sceptic's face here).

This radiant heat energy (because it involves only long wavelengths) interacts differently with chemical gases in the atmosphere differently than does the full spectrum of electromagnetic radiation from the sun. Specifically, gases like carbon dioxide, water, and methane will reflect some of the heat, sending it back downward like the roof of a greenhouse (hence the name for the… you get it). Just as in a greenhouse, the area under the atmospheric "roof" gets warmer.

Mars, for starters, has no atmosphere to speak of. No atmosphere means no gases, hence, no GE. Hence, a very cold and barren (but nicely red) planet. Venus, over the other shoulder, has a planet thick with greenhouse gases, thus is extremely hot; and Venus is incapable of sustaining life as well (and Venus would not be significantly warmer than Earth without those gases, even though it is closer to the sun).

In the middle is our Earth, with its mix of gases wherein CO2 used to be present at under 300 parts per million (ppm). However, our industrial age burning of fossil fuels has filled the atmosphere with increasing levels of CO2, up to and now over 400 ppm – and done so inevitably. This is a fact that cannot be wished or hand-waved away. Increasing the greenhouse gases increases the heat- retaining capacity of a planet – again, this happens inevitably.

These two facts alone are proof that human activity has caused the planet to warm, regardless of what may have been happening with sunspots, regardless of whatever trend (warming or cooling) the planet has otherwise been on. The planet has means of adapting, within limits, but it also has a need to maintain a balance. Increasing a greenhouse gas by over 33% is utterly disrespectful of that balance.

Putting more red dye in a pool will make make it redder; you can dilute the pool water all you want, or add to it from other sources, but the dye still has the effect of making the water redder than it was. That is all that need be said to refute the claim that humans have not contributed to global warming. It may not satisfy all sceptics, but some people think there is virtue in claiming to keep an open mind (an attitude they would drop in a heartbeat if you told them they were about to be run over from behind by a buffalo, when they finally heard it snorting a half-foot away from them… but alas, too late. Same story with global warming, unfortunately.)

At present, the warming caused by increasing CO2 is intense enough that it is causing the tundra in Arctic regions to melt, and ocean waters to warm dramatically, both of which are causing methane (an extremely potent greenhouse gas – more than 100 times as heat-trapping as CO2 in the short term) to be released into Earth's atmosphere.

The level of CO2 is now well above 400 ppm, although several years ago we were warned that 350 ppm represented a point of no return. The methane level could soon begin to rise exponentially (it could, in fact, be doing that now). Again, all the data and all the sordid truth is to be found, fully documented, on this website, including a discussion of Venus syndrome. A familiarity with the latter might be handy, since the planet is well on its way to becoming more like Venus than like Mars. More like Venus than like Earth as we once knew it, more to the point.

While the Earth's biosphere and adaptive abilities add more variables to the climate equation, those have nothing to do with the direct correlation between the GE, CO2 and humans. Climate change deniers like to say that human activity could have made things swing either way, but it hasn't. It has made things swing toward a rapidly overheating planet – one that will soon be uninhabitable, if we don't make some drastic changes without delay.

So what's a species to do, when it knows it has spoiled the beautiful relationship it had enjoyed for eons with its home planet? Going to outer space and going underground are for the ultra-rich exclusively (and both are doomed to failure; we haveto stand by our planet no matter what). The POTUS approach involves, apparently, tough love: he did, after all, insist that this was an issue of a threat to our national security. I must confess, I'm still scratching my head over that one, as well as his predilection for making this climate change speech to military (and other Homeland Security) audiences. Are they going to shoot the heat out of the sky? Does he not understand that that isn't the function of heat-seaking missiles?

I was surprised to notice that the POTUS did not mention putting a halt to jet-produced contrails as a necessary measure. After all, if those strangely non-cloud colored trails filthening our skies really are, as all government officials claim, contrails, that means there is significantly more cloud cover in the atmosphere than there need be; as we all know (from watching the difference in temperature drop on a clear versus a cloudy night, for example – meteorologists used to love to point this out), clouds hold in heat, thus adding to the greenhouse effect.

Given that even with more primitive technology jets were, for decades, able to fly all around without producing those spreading, persistent, non-cloud colored (ahem) clouds, we certainly could and should immediately take the step of eliminating all (ahem) contrails.

Or could it be that all those conspiracy theorists are right that they aren't really contrails, and there is geoengineering running amuck even as you read this?

One consideration that springs to mind: would jet engines really have gotten so much worse as time went on? After all, even the aesthetic effect of those trails is good grounds for eliminating them; besides which, they block the sun and therefore negatively impact plant growth (which means less CO2 absorbers, which means more greenhouse gases to cause global warming). But the reality is obvious. They are not contrails; they are mixtures of metals and other materials being sprayed intentionally into the atmosphere. They are the most deadly component of geoengineering. Documentation: all over this website.

Still, it is encouraging that the ruling class finally seems committed to taking positive action (taking them at their word). All the right measures have already been discussed at length, but lets go through the most important one in condensed form.

The first step is to halt the activities that are causing runaway warming. Without question, the first to go is, and must be, the spraying of metal particulates into the sky, along with all other forms of geoengineering. Not only has research proven that the spraying only worsens global warming, though that is reason enough, even for the most wooden-headed puppet.

Perhaps more importantly, the planet cannot recover unless its healing mechanisms are intact, or at the very least salvageable. Among other problems, the metals being sprayed (among which certainly aluminum, barium and strontium, and possibly others) are killing whole forests and other forms of plant life by poisoning them, by killing off pollinators like bees, by causing them to stop absorbing the nutrients they need from the soil, by reducing sunlight, and (somewhat paradoxically) by increasing the wavelengths of sunlight that can kill them on contact. The only way to salvage what is left of Earth's self-healing abilities is to stop geoengineering immediately.

That bears repeating: the only way to salvage what is left of Earth's self-healing abilities is to stop geoengineering, immediately. And since a fair amount of geoengineering involves spraying from military aircraft, perhaps the POTUS has a point in addressing a speech about global warming to members of the military. If that is what he is thinking, I'll stop with the POTUS and start referring to him as President Obama.

7 Responses to The Most Serious Threat? Or Climate Science 101?