The Oceans Are Dying And Governments Of No Conscience 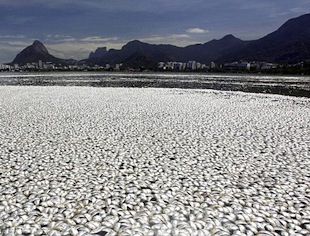 This planet is in serious trouble, but even more so humanity, because over many millennia the oceans will possibly heal themselves … BUT when the oceans die … So Does Humanity.

Yet where are the government alarm bells? Where is the massive push for research and solutions? Aren’t we a nation used to doing the impossible such as putting a man on the moon, defeating communism, splitting the atom etc…? But here we are facing an ever increasing, VERY REAL, threat to ALL life on this planet and we are stuck in neutral!

Could this inaction by corrupted global governments be intentional? Could there actually be those among us so evil that they perpetrate and perpetuate this scenario? Do you have a better answer for the almost total inaction to this catastrophic reality?

Here is a Blatant example of government complicity, corruption or sheer ineptitude (I don’t really believe the last one) …

Our governments reaction to ever increasing levels of radiation in the pacific sea life we eat … is to increase, by a large percentage, the allowable (legal) level of radiation in the food we put on our, and our children’s, dinner table (with no announcement or fanfare). Wait, wasn’t there a very valid health reason for setting the original limits? This is pure unadulterated Madness!

Plankton, sea lions, seals, starfish, anchovies and a massive amount of all large fish or mammals including Porpoise and Wales (which are Sentient Species) … these are but a few of the continuing die-offs we can see with our own eyes, with no information required from our criminally inactive governments.

Inaction is the recipe for the utter collapse of the biosphere and thus humanity, and we are watching this unfold, in an accelerating fashion, right before our very eyes!

There is no place to run or hide from this, try as you may. Our only recourse is to wake up to this blight and force our complicit governments into action, or bequeath a dying or dead planet to our children …

Just do any research … PLEASE … and you will find ongoing catastrophic events continuing to unfold, and not in the shadows, but right under our noses.

With all the information that is available to you, as well as what The Liberty Beacon project has already presented to you, if you chose to say, or do nothing … how can you look your doomed children or grandchildren in the eyes and tell them …