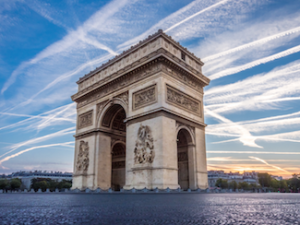 What is the Paris climate conference really about? What is really going on behind the endless assault of smoke and mirrors erected and orchestrated by those in power? 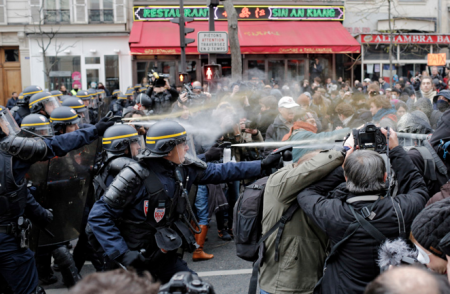 The recent terrorist attacks (false flag?) have not only given the global power structure exactly the excuse they needed to further ramp up their intervention in Syria and other Middle Eastern counties, it also handed to them the pretext to completely clamp down on any form of protest at the Paris climate talks. There is no rational denial of these facts.

“All this makes us think that the state of emergency is being used as a way to shut us up,” said Juliette Rousseau, who coordinates a coalition of environmental and social justice groups known as Climat 21.

The Paris climate conference is ultimately not about curbing global greenhouse gases, or slowing the mass planetary decimation being caused by industrialized society, it is about, yet again, doubling down on the status quo and climate engineering. Industrialized civilization is destroying the planet's ability to support life, global geoengineering is the absolute epitome of the industrialized/militarized destruction. The reality we have all known is spiraling into total collapse, we are far past the point of no return in regard to the once thriving planet that we previously knew. This being said, there is yet one quantum leap we could collectively make in the right direction, to fully expose and halt the global weather warfare/climate engineering assault while there is still some part of Earth's life support systems left to salvage. The insanity of geoengineers like David Keith must be brought to light. 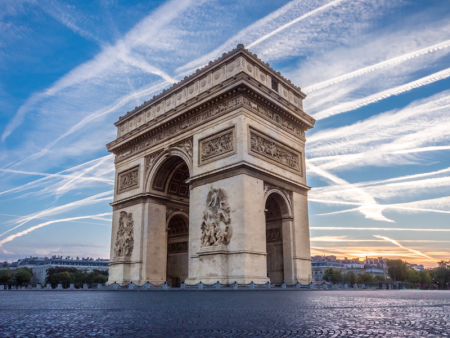 Many claims have been made about the true agenda of this conference, do such claims match available facts? Dichotomous thinking must be abandoned if grounded conclusions are to be reached. Honest objective investigation without bias is essential.

If that was true, why did the US and France already start backpedaling on any binding agreement before the climate talks even started?

Claim: France has preemptively arrested "climate deniers" before the start of the conference.

Though draconian arrests have indeed been carried out, available information indicates the incarcerations were of those who threatened to protest the lack of climate action, not of those denying climate change.

Claim: Global geoengineering will be legalized at the Paris conference.

In all previous climate conferences, global climate modification has never been admitted to as an ongoing reality. Thus far, there is no credible information to indicate the Paris meeting will admit to or confirm the geoengineering reality, let alone legalize it.

Claim: Global warming is just a "problem, reaction, solution" scenario that has been manufactured by those in power as a means of producing profits. Also claimed: Global warming does not exist or cannot be verified unless or until climate engineering is halted.

If a person was found injured and unconscious, but the cause or various causes of the injury were not yet known, admitted to, or conclusively confirmed, does that mean the injury doesn't exist in the first place? Wars are most certainly utilized by the power structure to produce massive profits, does that mean wars are not real? Such lines of thinking are not rational or a factual basis on which to form a conclusion. Though there are countless "disaster capitalists" trying to make all the profit they can from the disintegrating climate system, that does not negate the reality itself.

Many claim that there has been a nearly two decade "pause" in escalating global temperatures. Does front line data support this claim? No. Not only was there no "pause" in the warming, the planetary meltdown continues to accelerate with the completely out of control climate engineering insanity helping to fuel the overall fire. Engineered short term cool-downs at the cost of a worsened overall warming and a completely poisoned planet.

Many countries are comfortable with both the term "treaty" and legally binding emissions targets. But this would increase the likelihood that the agreement would have to go to a hostile US Congress for approval, an outcome the Obama administration is keen to avoid.

Veteran observers have long expected that a final deal would need to be worded in a way that satisfied the US, as well as China and other large emerging economies reluctant to take on onerous legal obligations to cut emissions.

Clearly the major global powers (most responsible for the geoengineering juggernaut of destruction) want nothing to do with cutting emissions. Though these powers (like the US, China, and Russia) have well known and well publicized opposing interests, they are all collaborating on the issue of climate engineering. Extensive historical congressional documents (750 pages) on climate engineering call for such collusion between nations that otherwise have competing interests. Historical presidential reports also describe and detail the ongoing global weather modification. The global power structure is completely committed to the current model of total planetary decimation in the attempt to maintain their power until there is nothing left of the biosphere. Past climate conferences and agreements of course have done absolutely nothing to slow the polluting, plundering, and pillaging of the planet, they were never intended to. Paris will likely go down in exactly the same category. 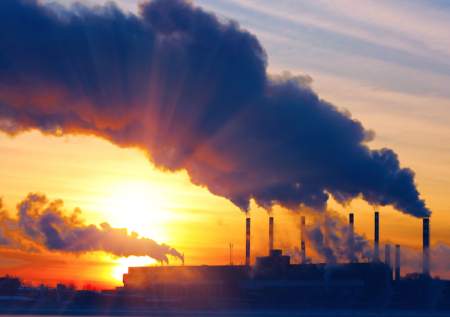 The planet is not just warming, it is being pushed into total meltdown. Any valid discussion of this fact must include the climate engineering factor. I attended a Global Climate March in Chico, California, on November 28th, the march was put on by the "350.org" group. Unfortunately, the climate science community and the environmental groups that support them are (with few exceptions) in total denial in regard to the geoengineering elephant in the room. Astoundingly, very few from this group were interested in geoengineering information I and other activists were trying to pass on to them. Bill McKibben is the head of this group. McKibben receives funds from the Rockefeller foundation, what a surprise. 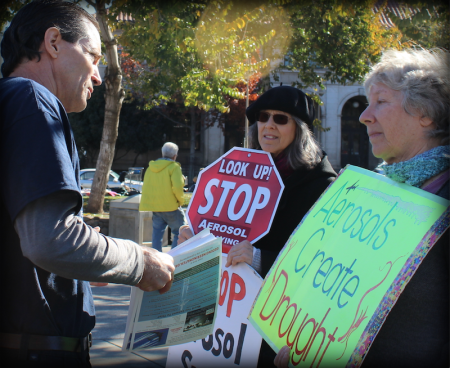 On the other side of the fence, an unfortunately large percentage of the anti-geoengineering community is in total denial of the completely verifiable extremely rapid warming of our biosphere. The planet is heating up at a rate equal to 4 Hiroshima bombs PER SECOND. 2014 was the warmest year ever recorded. 2015 will break that record and 2016 will likely shatter the record yet again.  Facts about global warming have nothing to do with Al Gore or carbon credits (both of which are scams). Rather, it is about reality and credibility. Both factors are essential pillars to stand on if the battle to expose and halt climate engineering is to be successful. The planet's former energy balance and equilibrium has been radically altered from countless anthropogenic causes, with geoengineering at the top of the list.

If bridges are to be built between the climate science community and the anti-geoengineering community, the toxic tug of war occurring in our atmosphere (between the buildup of greenhouse gasses and the spraying of geoengineering aerosols) must be recognized and acknowledged by both groups. Willful denial and blind ideology on either side of the fence (creating division) will only continue to help toe the line for the military industrial complex and the weathermakers. There will never be a shortage of disinformation sources which aggressively deny the geoengineering reality and global meltdown issues, it is up to each of us to think and investigate the front lines for ourselves. It is up to each of us to verify that we are seeing the world through a clear lens.

The Paris conference is about the increasing desperation and tyranny of those in power (the recent "gag order" placed on NWS and NOAA employees is another glaring red flag of desperation). Climate engineering is a reflection of these factors. How can we turn the tide? By facing the full reality head-on and encouraging others around us to do the same. By making every day count in the battle to reach a critical mass of awareness. The human race has decimated the planet in countless ways, climate engineering is the epitome of the insanity and destruction. Make your voice heard for the greater good, all of us are needed in this fight.
DW

92 Responses to The Paris Climate Conference, What’s The Real Agenda?