Total Solar Eclipse In The Sawtooths – Fellowship Of The Diamond Ring… OR, Climate Geoengineering Death March 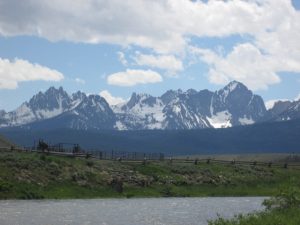 Adventure Beckons…
The chance to witness 2017’s total solar eclipse, virtually in my own back yard, was an exciting surprise.  Totality could be viewed only 15 miles north of my Bellevue, Idaho, home and I expected to enjoy it with family and friends.  It soon became apparent, however, that I was the only person in my circle who was excited about this.  Thanks to excessive media hype, most folks planned to just hide out at home and avoid the crowds.  Well, 99.77% totality, literally viewed from our own backyards, may have been good enough for them, but not for me.  I have witnessed many eclipses, but never Totality, and I wasn’t about to miss this!

Like my family and friends, I had no desire to put up with crowds and traffic so began looking beyond Ketchum and Sun Valley, the two nearby towns where Totality could be viewed.  Instead, I chose the strikingly beautiful Sawtooth Mountains, just over an hour’s drive north.  After searching satellite images, for a vantage with as many visual attributes as possible, I settled on a high altitude lake.  Situated in a cirque, between the rugged spires of Thompson Peak and the pyramidal massif of Williams Peak, this would require more than a casual drive and a place to park.

Known as the American Alps, the Sawtooth mountains are considered by many to be Idaho’s most picturesque and are heavily laden with lakes of every size and shape.  Some, such as Sawtooth Lake and The Baron Lakes, are well known locally while others, like my lake of choice, remain unnamed.  My destination was noted on maps simply as lake 9,000, the elevation (in feet) at which it rests.  Undaunted by that tidbit of information (aggressive hike for this old gal), and in spite of being very out of shape, I began planning my adventure.  I even hoped to “bag” Thompson, the highest peak in the Sawtooth range, while I was at it… there is a route to the 10,751ft summit that isn’t technical, and which only requires hiking around the northwest flank and up the South Couloir (a steep, narrow gully on a mountainside) for a short scramble up rock debris, known as talus, to the top.