Typhoon Haiyan (Yolanda), the strongest tropical typhoon ever recorded, has resulted in devastating consequences for the Philippines 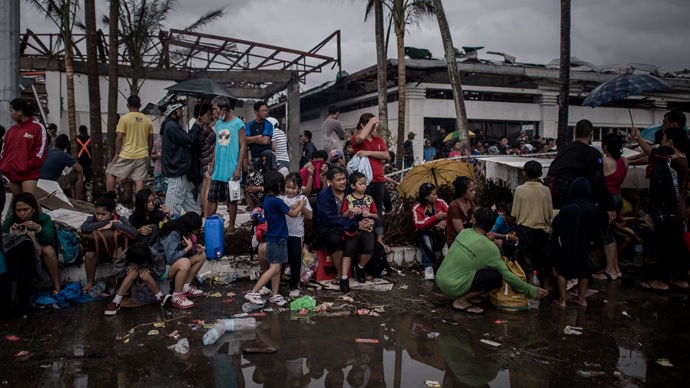 An estimated 615,000 residents have been displaced. Up to 4.3
million people have been affected, according to government
sources.

The tragedy has become a talking point at Warsaw Climate Change
Conference under UN auspices. The plight of Typhoon Haiyan has
casually been assigned without evidence to the impacts of global
warming.

While there is no scientific evidence that the super typhoon was
the consequence of global warming, opening statements at the
Warsaw summit hinted in no uncertain terms to a verified casual
relationship. The executive director of the UN Framework
Convention on Climate Change (UNFCC), Christiana Figueres, stated
(without evidence) that the typhoon was part of the “sobering
reality” of global warming.

In turn, the Philippines’ UN representative at the Climate Change
talks, Yeb Sano, stated in his address at the opening session
that “Typhoons such as Yolanda (Haiyan) and its impacts
represent a sobering reminder to the international community that
we cannot afford to procrastinate on climate action. Warsaw must
deliver on enhancing ambition and should muster the political
will to address climate change.”

In a bitter irony, the tragedy in the Philippines has contributed
to reinforcing a consensus which indirectly feeds the pockets of
corporations lobbying for a new deal on carbon trade.
‘Cap-and-trade’ is a multibillion dollar bonanza which is
supported by the global warming consensus.

According to UNFCC executive director Christiana Figueres, “We
must clarify finance that enables the entire world to move
towards low-carbon development…We must launch the construction
of a mechanism that helps vulnerable populations to respond to
the unanticipated effects of climate change.”

Known and documented, cap-and-trade markets are manipulated.
What is at stake is the trade in carbon derivatives which is
controlled by powerful financial institutions including JP Morgan
Chase. In 2008, Simon Linnett, executive vice-chairman of
Rothschild, acknowledged the nature of this multibillion dollar
business.

“As a banker, I also welcome the fact that the cap-and-trade
system is becoming the dominant methodology for CO2 control.
Unlike taxation, or plain regulation, cap-and-trade offers the
greatest scope for private sector involvement and
innovation,” he said, as quoted by The Telegraph.

Cap-and-trade packaged into derivative products feeds on the
global warming consensus. Without it, this multibillion dollar
trade would fall flat.

The humanitarian crisis in the Philippines bears no relationship
to global warming. The social impacts of Typhoon Haiyan are
aggravated due to the lack of infrastructure and social services,
not to mention the absence of a coherent housing policy. Those
most affected by the typhoon are living in poverty in make-shift
homes.

A reduction of CO2 emissions – as suggested by Yeb Sano
in his address at the Warsaw summit – will not resolve the
plight of an impoverished population.

In the Philippines, the social impacts of natural disasters are
invariably exacerbated by a macro-economic policy framework
imposed by Manila’s external creditors.

What is at stake is the deadly thrust of neoliberal economic
reforms. For more than 25 years – since the demise of the Marcos
dictatorship – the International Monetary Fund’s “economic
medicine” under the helm of the Washington Consensus has
prevailed, largely serving the interests of financial
institutions and corporations in mining and agribusiness.

The government of Philippine President Benigno Aquino has
embarked upon a renewed wave of austerity measures which involves
sweeping privatization and the curtailment of social programs. In
turn, a large chunk of the state budget has been redirected to
the military, which is collaborating with the Pentagon under
Obama’s “Asia Pivot.” This program – which serves the interests
of Washington at the expense of the Philippines population – also
includes a $1.7 billion purchase of advanced weapons
systems.

3 Responses to Typhoon Haiyan (Yolanda), the strongest tropical typhoon ever recorded, has resulted in devastating consequences for the Philippines