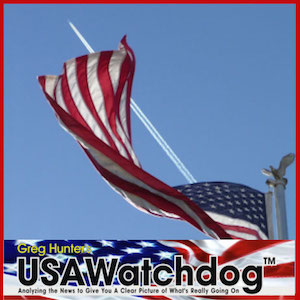 Greg Hunter is a highly respected veteran news reporter who has worked for many major news networks in the past.  Greg continues to make his voice heard as the producer and creator of USAWatchdog.com. The site's slogan is "analyzing the news to give you a clear picture of what's really going on". Unlike those in the corporate media propaganda circles, Greg has the courage to thoroughly  address the most critical issues that most of his peers are afraid to even mention. In the article and video below USAWatchdog helps to shine the light on the extremely dire issue of global climate engineering and the planetary devastation it is causing.
Dane Wigington
geoengineeringwatch.org

Dane Wigington runs a website dedicated to exposing and explaining to the public the dangers of climate engineering, also known as “chemtrails”.  This is not some sort of conspiracy theory but hard science, also known as “solar radiation management” or “geoengineering.”  What does Wigington say to the disbeliever?  “We have film footage of these tankers spraying at altitude, up close nozzles visible.  We have close up photographs of these nozzles right behind the engines.  At that point, the argument ends.  We have footage of the crime happening.  There is no argument or dispute–it is absolutely going on.  We have President Obama going on the record saying that climate change is the greatest national security threat of all. . . . Do you think that they would ask our permission before they do this?  That is a very naïve thought,” says Wigington.

Wigington says the greatest true threat is chemicals and heavy metals being sprayed globally.  Wigington contends, “Although geoengineering, or solar radiation management, is sold as a runaway warming mitigation, we have enough data to know it is making the situation worse and not better.  So, at this point, it is an attempt to hide the problem. . . . Climate engineering is shredding the ozone layer, which allow more thermal energy to come in.  So, the more they spray, the more they have to spray.  It is also redirecting upper level wind currents, which is also redirecting ocean currents.  We have warm water now pumping into the artic, and that is releasing methane.  We have a global methane cataclysm going on right now.  Geoengineering is making a host of bad things worse.”

How bad?  Wigington says, “We have a species extinction rate today that is likely approaching 300 every single day.  200 to 300 different plants and species going extinct every single day.  So, we are in the sixth great mass extinction now. I don’t care how much money you print.  I don’t care how much you falsify unemployment figures.  If the planet can’t support life, it’s game over.  We are on a fast track for that place. . . . The bottom line, at this point, is the power structure is doing all it can to hide reality from the climate, to the species extinction rate, to the economic figures.  It’s like a snake eating its own tail.  They simply are trying to hide it as long as they can to stay off panic as long as they can but we are on the fast track to total disaster and total collapse.

How much time do we have before total collapse?  Wigington says, “I would be surprised if we reached the end of this year without some very big shoes dropping.  That doesn’t mean that everything comes to an end.  It simply means they will have a very hard time hiding the gravity and the immediacy of what we face for much longer.   We have massive military operations like Jade Helm taking place, which is absolutely unprecedented.   We have alarming things starting to occur, and I would argue that the power structure is being pushed further and further into a corner.  People are waking up, and the moment people wake up to climate engineering . . . at that moment our paradigm will shift.  The power knows this, and I would argue that they are preparing for that right now. . . . This is a matter of record.  The Pentagon has been preparing for total global societal collapse for quite some time.  A lot of bad things are happening all around us while we are watching football and Dancing with the Stars.”

In closing, Wigington says, “We are talking about a climate shift.  The climate is disintegrating right now, and climate engineering is helping to fuel that process.”

After the Interview:
Wigington has spent his retirement money warning the public about what is going on with climate engineering.  He has zero monetization or advertising on his website GeoEngineeringWatch.org.  He says he does not want to taint the site or the scientific data on it.

If you would like to see how some state legislatures, such as Rhode Island, are taking on this issue, click here.  You can also find a tremendous amount of scientific proof and information on GeoEngineeringWatch.org.

If you are searching the internet to do your own research, Wigington says do not use the search term “chemtrails” because you will get conspiracy disinformation and not pure scientific information.  Wigington suggests you use scientific terms such as “geoengineering”, “climate engineering” or “solar radiation management”.