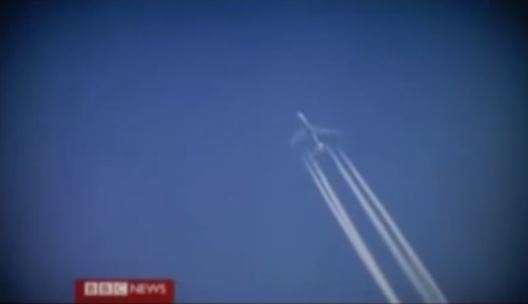 The short video below was just sent to us at geoengineeringwatch.org by a veteran anti-geoengineering activist from Greece, Wayne Hall. Wayne correctly addresses the fact that one branch of the global power structure is pushing for “carbon credits” and increased “carbon taxes” to combat increased greenhouse gases from air traffic, while another branch of the same power structure is in complete contradiction. This second group typically denies any notion of “anthropogenic climate change” while at the same time pushing stratospheric aerosol geoengineering (SAG) as a cure for the climate change that they say does not even exist in the first place.

Next, Wayne Hall correctly addresses the unacceptable positions being taken by major “environmental” groups. A position that is actually helping to hide the lethal global spraying. Our appreciation goes out to the individual in this video for pointing out very important aspects of the geoengineering issue, those that support this insanity, and those who are helping to hide this horrific crime.

Geoengineering is helping to obscure some 22% of the suns incoming thermal energy (global dimming) This is in fact altering our climate unquantifiably and doing unimaginable harm in the process. Changing wind and weather patterns, completely disrupting the hydrological cycle, shredding the ozone layer, contributing to catastrophic climate feedback mechanisms, and poisoning the entire web of life. Though the toxic “sunshade” from the geoengineering has masked the true state of our climate, as has the ongoing artificial ice nucleation of precipitation events,(engineered snow storms), both processes are completely decimating the climate system. The ongoing geoengineering programs do cool massive regions of the planet, but it comes at the cost of a far worsened warming overall. Geoengineering is comparable to the use of “corexit” in the Gulf which according to some reports made that region some 52 times more toxic.

In their ongoing efforts to hide their crimes, those in power don’t give a damn about the consequences of their actions. The more they spray our once blue planet, the more they have to spray to cover the damage already done. Geoengineering has forced us all into a lethal downward spiral that has now put all life on Earth in the balance. Its up to all of us to bring this dire issue to light and to a halt. We must reach critical mass of awareness as soon as possible.
The short video below is well worth the time to watch.